YO HO AND UP SHE RISES

We should all be familiar with the foundation myth of Magonia. According to Jacques Vallee’s Passport to Magonia, in the late ninth century the pitchfork-armed peasantry of a town in the south of France captured three men and a woman who ‘fell from the sky’ in a mysterious craft.
🔻
Bound up, they were due to be stoned by the angry mob, until the respected Archbishop Agobard of Lyon intervened and saved them from certain death. The archbishop dismissed the crowd’s insistence that the four strangers had fallen from the sky, saying they were “plunged in great stupidity and sunk in depths of folly” to believe such nonsense that ships flew in the sky from the land of Magonia.

Nearly a thousand years later, virtually the same scene was repeated. In 1783, the inhabitants of another small town near Lyon were terrified by a burning spectre which descended into the fields nearby. This time there were no strange people involved and the locals were content just to watch the ‘ship from the skies’ burn away, as they assumed that the end of the world was upon them. This was one of the Montgolfier brothers' first hot-air balloons.

A few weeks later a young professor called Jaques Charles released a balloon over Paris. He had inadvertently used the more efficient hydrogen gas to lift the balloon rather than the hot air from a straw fire that the Montgolfiers had used, because he had read a misdescription of the details of the earlier flight. When his balloon landed a few miles away from Paris the locals were not so sanguine as the Lyonnaise , and set upon the ‘monster’ with knives, muskets, rocks and pitchforks in the manner made famous by the inhabitants of the Simpson’s Springfield.

Despite these setbacks the craze for ballooning soon swept France and, after a pause so as not to be seen too eager to emulate our cross-channel neighbours, Britain as well.

Ballooning soon became a fashionable pastime, and a hugely popular public spectacle. Most balloon ascents were made from pleasure grounds like London's Vauxhall Garden, and were cheered on by thousands of paying spectators. The enthusiasm was so great that sometimes a delay to the balloon's ascent would trigger a riot by aggrieved spectators feeling they had not got their money's worth.

The promoters of the displays were not slow in catching on to the idea that any popular spectacle could only become more popular if attractive young ladies were involved with it. And if a whiff of sexual scandal could be introduced, so much the better, especial as the whole idea of ballooning seems to have been surrounded by sexual innuendo in the popular prints.

One victim of such innuendo was Letitia Sage, who should go down in history as the first Englishwoman to fly, but whose initial ascent over London was overshadowed by salacious gossip.

On the 29th June 1785, Mrs Letitia Sage, an actress described as 'well formed' in contemporary accounts, ascended in a balloon built by the Italian ballooning entrepreneur Vincent Lunardi, in front of a crowd of 100,000 people at St George's Fields in Southwark. She was accompanied in the balloon's basket by a Mr George Biggin, one of the financial backers of the enterprise. 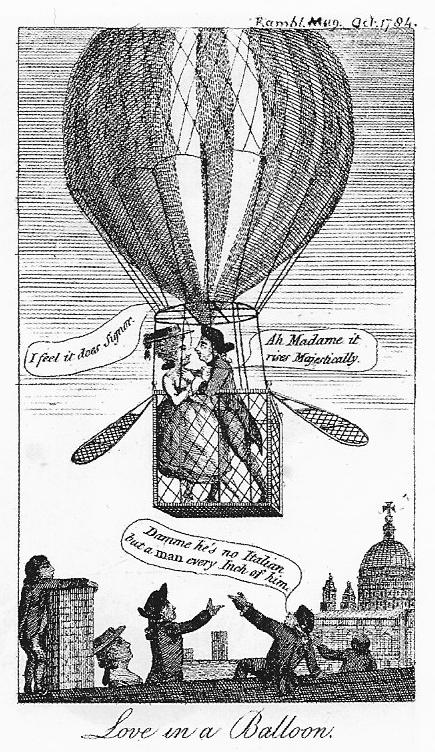 All went well until at one point part of the equipment in the balloon came loose and Letitia knelt down to fasten it. Her sudden disappearance below the side of the basket led to immediate speculation. As the author says: “Her achievement was overshadowed by scandalous gossip, what exactly was she doing on her knees as she and Mr Biggin were flying over Piccadilly . . . the problem was that as soon as balloons reached Britain men began taking bets on whether it was possible to have sex in them.” The supposed sexual exploits of balloonists soon became the subject of lampoons and scurrilous cartoons.

Although at first female balloonist were encouraged by promoters to give a saucy frisson to the audience, women soon began to seek out the excitement of flight for its own sake.

One such was the French balloonist, Sophie Blanchard. She was introduced into the sport (or art, or whatever you might call it) when she married the already famous professional balloonist Jean-Pierre Blanchard, but very soon was a celebrity in her own right, becoming in 1805 the first woman to fly solo. A small and timid woman, terrified by sudden noises and fearful of accidents in the street, she blossomed into a totally different personality when aloft

Following her husband's bankruptcy, she developed her solo performances using small and smaller gondolas under the balloon until she was standing just on a tiny platform. To spice up her performances even more she took to setting off fireworks from her balloon, to the delight of the vast crowds who came to see her. The combination of fireworks and a frail hydrogen-filled fabric balloon came to its inevitable conclusion when her craft exploded and she plummeted to her death.

She lies in the Pere-Lachaise Cemetery in Paris beneath a memorial depicting a balloon in flames, with the words “Victim of her Art and Intrepidity”.

Throughout the nineteenth century more and more women took to the skies as the ballooning craze progressed. Some were working class girls like 18-year-old Jane Stocks, who left her job as a domestic servant to take up entertainment ballooning. Gaining fame for surviving a dramatic crash on her first ascent, she suffered a series of disasters throughout her career – not of which seemed to discourage the crowds who came to gawp, or indeed the lady herself. She eventually faded from the scene after missing a performance by taking too long over a cup of tea.

But is was not just starry eyed young women who were drawn into the world of ballooning, and the sport became fashionable among the fashionable classes. The author's chapter title 'Hampers and Champers' perfectly summarises this side of the story!

At the same time that these intrepid adventuresses were flying in, and plunging from, balloons in Britain and France, there were parallel activities in the USA, including riots by disappointed punters and daring lady aeronauts.

In 1825 a ‘Madam Johnson’ of uncertain, possibly French, origin was the first woman to fly in the United States, but was soon followed by many native-born women. These included figures such as Leona Dare, ‘The Queen of the Antilles’, noted for her ‘iron jaw’; part of her act being to perform acrobatics supported from the trapeze beneath her balloon only by her teeth. Parachuting from balloons was a favourite activity with American female aeronauts.

One such was the interestingly named Mrs Van Tassel. In 1888 she foiled an attempt by Los Angeles police to prevent her from what they considered certain suicide, by bringing her performance forward as they raced to stop her, leaving them staring skyward at the ascending balloon, one hopes scratching their heads in bafflement in the approved Keystone Cops manner! The name Van Tassel raises the intriguing possibility that this adventurous lady was the mother or aunt of another individual with a consuming interest is skyward travel, Mr George Van Tassel of Integratron fame.

As the nineteenth century closed the balloon was being used for more practical matters than mere entertainment, particularly its military possibilities, although there were still many women keen to demonstrate their skill and agility in daredevil displays, and in the first years of the twentieth century it even became a tool for distributing suffragette propaganda across London. Eventually of course the balloons were overtaken by the development of powered heavier-than-air flight, although some of the balloonists took to the new invention with enthusiasm.

One of the last lady balloonists, Dolly Shepherd made her first balloon flight from Alexander Palace, north London, at the age of 16, and enjoyed her last aerial adventure in a flight with the Red Arrows aerobatics display team in her nineties!

It has always struck me that the technology involved in ballooning in its pioneering hot-air days, is not particularly complicated. All the materials to construct a hot air balloon existed from pre-classical times, and there seems to be no reason why the Romans, say, could not have created a viable craft. Perhaps those ninth century visitors from Magonia had discovered the secret, but after their narrow escape decided to abandon any further experiments!

Some people have suggested that the creation of the Nazca Lines in Peru may have been directed from a hot air balloon, and a ‘Kon-Tiki’ style balloon was manufactured from materials available in the area at that period, which flew successfully.

Reading about the activities of balloonists in the USA at the end of the nineteenth century, raises once again the question of whether the 1897 ‘airship wave’ may not have involved an actual real airship to account for at least some of the cases. There certainly seem to have been plenty of inventive balloon builders around in the USA at that time, including some experimenting with guidable powered craft. Just possibly . . .?