I learnt a new word reading this book: apotropaic, which is defined as “having the ability to ward off evil”, from the Greek αποτρέπειν, to ward off; from απο- ‘away’ and τρέπειν ‘to turn’) This is the term used to describe objects, signs and other indicators that are left in houses, stables and other buildings to ward off malignant spells and curses that may be placed upon then by malevolent agencies.
🔻
The book divides into two parts, the first half being a description and historical analysis of objects and symbols concealed during the construction of houses and afterwards, and which have subsequently been revealed. The second half is a county by county listing of such finds which have been preserved or recorded. The second part will be of importance to academics, but is probably of less interest to the general reader, and may be partly responsible for the extremely high price of this book.

This is a pity as Brian Hoggard is a researcher who is able to write about this topic in a very accessible manner (as anyone who heard his talk to the London Fortean Society symposium on ‘The Haunted Landscape’ in November 2019 can testify), and the book is worthy of a much wider audience that the present edition is likely to receive.

We are all familiar with the practice of hanging up horse-shoes as a ‘good-luck’ token, although there is some disagreement as to whether the points of the shoe should be pointing up or down. My grandmother insisted that if the points were turned down, “the luck would all run out”.

Lots of people hang up a horseshoe, but maybe we would be less inclined to bury a dead cat under our threshold, or place a bottle full of urine and nail clippings up our chimney, or nail horses skulls underneath the floorboards? These are just some of the objects which have been used for centuries to offer some sort of ‘magical protection’ to houses and other properties.

In the past magic and witchcraft was not a topic for discussion between believers and sceptics, it was just an ordinary part of everyday life, and taking precautions to divert its power was seen as no more remarkable than taking an umbrella with you on a wet day to protect you from the rain. Equally taking magical action yourself against another person who had hurt or threatened you was just as rational a response as reporting them to the police would be now.

One way of dealing with evil magic was to follow the example of a saint or other religious figure, such as the now almost forgotten Saint John Schorn. He lived in the fourteenth century and was the rector of North Marston in Buckinghamshire. Renowned for his holiness he was believed to have captured a demon in his shoe. Images of him show him holding a shoe with a demon looking out, and this is claimed to be the origin of the jack-in-the-box, known in France as diable en bôite, ‘devil in a box’. 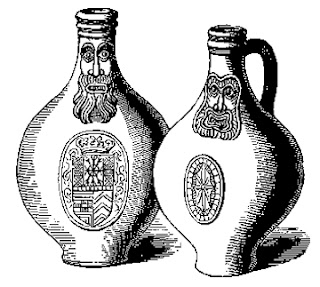 Although never officially canonised by the Church he became what I suppose you would now call a ‘people’s saint’ and his shrine became a place of pilgrimage. Images showing him with the devil help captive in his shoe led to the idea that shoes could be used as a way of capturing other demonic forces and neutralising them. They would therefore be placed in houses at the front door or in the chimney, the two places most vulnerable to demonic spirits entering the home.

‘Witch bottles’ are often encountered when builders are renovating or demolishing old houses. Usually these are glass bottles, but there were also the so-called Bellarmine Jars, large earthenware vessels, originating in Germany and the Low Countries in the sixteenth century. Usually marked with a grotesque face supposedly representing Cardinal Bellarmine, a militant anti-Protestant figure of that era.

These bottles and jars when examined contain curious mixtures of objects and substances. Most often this is urine, in which are found fingernail clippings and iron house nails. The iron nails are usually very deliberately bent and Hoggard suggests that this was intended to ‘kill’ the nail, so that its ‘spirit’ would be able to counter the magical forces on their own level. The urine and nail clippings served to identify the individual who filled the jar, and would act as ‘bait’ for the magical forces, who being drawn to it, would then be attacked by the ‘spirit’ of the nails, and other objects in the jar.

This also seems to be the logic behind the ‘mummified’ cats that are frequently found in old houses. The cats may have been killed as a form of foundation sacrifice, and their spirits were believed to be able to kill or scare away any malevolent supernatural entity. Sometimes they are ‘posed’ as if about to pounce, sometimes with a mouse positioned as if their prey, to emphasise their function.

A ritual sacrifice before commencing building may have been the origin of the practice of concealing horses’ skulls in building. Being too big to conceal within the walls, they were usually nailed to the underside of floorboards, sometimes in large numbers in a single location. Hoggard found that in later centuries this custom was explained as being a way of improving the acoustic properties of the floor for music and dancing, but he finds in an unconvincing suggestion. 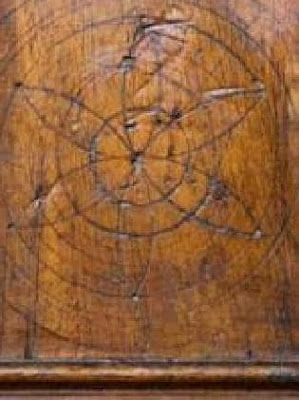 As well as physical objects, many ritual marks are found carved into old buildings, including the ‘daisy wheel’ symbol made with the points of a compass; a symbol made from two overlapping ‘V’s which reversed represented ‘M’ for the Virgin Mary; and marks like nets or grills, which may have been seen as as way of netting any evil forces.

Although the original meanings of these objects and symbols may have been forgotten over the centuries, the practices continued in one way or another into the nineteenth and even twentieth centuries. It is interesting that when such objects have been revealed during modern building work on an old house, the new owners are often keen to have it re-interred “for luck” when the work is finished. Clearly the need for some sort of supernatural protection is still as powerful as ever.

In the absence of any written records of these relics and symbols, the hidden objects form what Hoggard calls the ‘archaeological record’ of magic, which provides evidence of magical practices by levels of society who are hardly represented in the written record.

In his concluding chapter he writes: “All this material is very important for developing a true understanding of what witchcraft actually meant to real people . . . . The elite view of witchcraft, represented through the judiciary and clergy was one which tended to concentrate on the heresy of witchcraft and attempted to interpret all the testimony through that lens.” These objects and symbols “were made by real people as a direct result of their beliefs in witchcraft and they tell us a good deal about the way in which magic was perceived and witchcraft was experienced.” – John Rimmer.