The 500th anniversary of Leonardo da Vinci’s death has naturally unleashed a tsunami of books about the Renaissance genius, few of which add anything new to what’s been written before. This one, though, stands out by offering a novel approach to an understanding of Leonardo’s character, the thirst for knowledge that drove him, and the way he navigated the rigid and often precarious society into which he was born - and how his art related to all this.
🔻
In the author’s own words, his aim is to examine ‘the processes through which Leonardo used his own understanding of art, nature and society to shape his pictorial work as well as his own persona, which, seen from the distance granted by history, is as remarkable as his artistic legacy.’

As the title suggests, the book examines the interplay between Leonardo’s sense of self, his ‘immersive relationship with nature’ and his paintings. As Quiviger writes, ‘it could be said that he had two masters, Nature and Art, and it was through these that he produced images that changed the course of art history and gave new shape to the Western imagination.’

It’s a work that comes from a solidly academic perspective – François Quiviger is a Fellow of the Warburg Institute (as well as the editor of Reaktion’s Renaissance Lives series of which this volume is a part) – so unsurprisingly there’s nothing in here about codes or Da Vinci’s esoteric interests and heretical beliefs. (He does note, though, that despite Leonardo’s main output being religious images – all commissions, of course - his surviving writings ‘cast him as distinctly anti-clerical’ and make little reference to religion, displaying ‘more annoyance with monks and priests than interest in religious matters.’)

Although biographical in plan, taking us through the various phases of Leonardo’s life and discussing his output in the order in which it was produced, the book’s second chapter breaks with the chronological narrative – just after he’s established his reputation in Florence - to explore the writings on the theory and practice of painting that Leonardo composed later for his apprentices, so that Quiviger can apply these principles to his works as the story unfolds.

The author extracts from these writings an important insight for understanding Leonardo and his work: his emphasis on the reflective relationship between the artist and the work, in which – in a way reminiscent of alchemy - perfection in painting can only be achieved through the painter perfecting (or at least striving towards perfecting) himself, an effort carried out through the act of painting itself. According to Da Vinci, imperfections in the painter’s character will lead to an incorrect perception of the subject and therefore distort the finished picture. Quiviger writes that ‘this stage of self-shaping features in Leonardo’s thought as an intermediate stage between using a mirror as a guide and becoming oneself a mirror in order to reflect the world, without the deforming lenses of human quirks and defects.’ One could almost say that, to Leonardo’s mind, the painting creates the artist as much as vice versa.

It goes further, as the ultimate aim is that the artist takes himself out of the picture entirely (pun intended), Leonardo having developed ‘a style intended to obliterate the artist’s individualistic self’, with ‘painting as a means of erasing his personal self to become a mirror of nature.’ (Quiviger notes the irony that, despite this intention, Leonardo’s paintings have become the most expensive in the world precisely because they are identified with him.)

There’s plenty here to muse upon, as Leonardo is using almost spiritual language to describe the act of creating a work of art.

As well as Leonardo’s ‘individualistic self’ there was also his ‘civic self’ – the outer persona that he displayed to the world. Quiviger emphasises Leonardo’s rise through the usually rigid strata of fifteenth-century Italian society and the familiarity it gave him with all levels of that society. The illegitimate son of a peasant woman and lawyer father from the Florentine bourgeoisie, whose childhood was spent among farm workers, Leonardo became part of the artisan class, which gave him entry into ‘European high society as part of the entourages of kings and rulers’: ‘It can be said of Leonardo that he began as a peasant, grew up as an artist, matured as a perfect courtier and left behind him the image of a Renaissance man.’

A significant aspect of this social mobility for Leonardo’s civic self was learning to adapt his personality and image to the various circles in which he mixed: ‘The correspondence Leonardo left merely suggests he adopted what he deemed the most suitable stance with which to address a given interlocutor – an ability enabled by his deep and panoramic knowledge of human beings.’ Quiviger likens this ‘fashioning himself to the ideals of the time’ to his innovatory sfumato technique, which blurred the outlines of the subject of a portrait to blend them in naturally with their background. 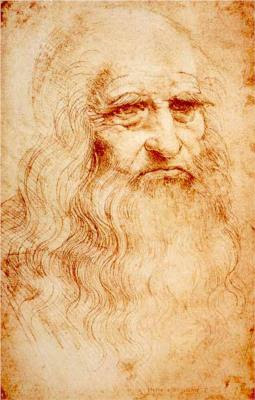 Quiviger compares this shapeshifting ability to the ‘malleability of self’ displayed by modern icons such as David Bowie, Madonna – and even Lady GaGa (surely one of the strangest comparisons ever made to Leonardo). He also makes much of the fact that ‘Leonardo’s understanding of the world is indeed compatible with much twentieth- and twenty-first-century thought.’ Thinking about this, it’s probably why people today get him so much more than they do other artists of the past.

Quiviger makes the crucial point – so often overlooked - that Leonardo, despite the reputation given to him by history, ‘was not primarily a painter,’ which will be a surprising statement to many. Painting may have been his ‘core discipline’ but ‘not as an end in itself but rather as a means to investigate the energies, variety and abundance of nature. So many aspects of representation led him to inquire into real things – and to set painting aside for the purpose of research…’ It was the way in which he ‘accessed and questioned the world.’

The author sums it up: ‘As the first painter-aristocrat, Leonardo thought of painting and drawing as a means to acquire, represent, examine and transmit knowledge, rather than as ends in themselves or as a means to generate income.’

As the term ‘painter-aristocrat’ suggests, the author gives a much more upbeat verdict on Leonardo’s life and achievements than many modern commentators who, judging him by today’s notions of success, regard him as something of a failure both in his personal and professional life, and imagine that he must, as a consequence, have ended his days in bitterness and regret. As Quiviger points out, as well as the achievement of that rise from rustic Vinci to friend of kings, Leonardo enjoyed a comfortable life and lived out his final years in his own castle – he described it as a ‘palace’ – bestowed on him by the King of France.

He also managed to live life on his own terms – no mean achievement in those times. As much as he shaped himself to the environments in which he moved, Leonardo was able to shape those environments to himself: ‘Alongside this multifaceted public embodiment of the human ideal of his time Leonardo lived an unusually independent life during which he successfully protected his privacy and thinking space from external disruptions.’

And as for his professional life, Quiviger concludes: ‘From the fifteenth century onwards, European artists were aspiring to be recognized as intellectuals, on an equal footing with writers, mathematicians, philosophers and astrologers. Leonardo was the first to truly make it, and probably the first artist to have become an international celebrity, eagerly sought after for his company and his work by kings and rulers, living like a philosopher-prince with his assistants, his servants and his horses.’

Not bad for an illegitimate country boy.

Self, Art and Nature is a fairly short book – 185 pages of main text – but covers the subject in greater depth than many weightier tomes. It’s admirably written, clear and concise and assuming little background knowledge of Leonardo, his times or the practice of art – Quiviger’s explanations of Leonardo’s painting techniques and style are particularly clear, especially for a non-artist like myself, and his analysis of the paintings mercifully free of the pomposity of much art history. The book is also attractively produced on high quality paper and lavishly illustrated in colour.

It serves as an ideal introduction to the great man as well as providing deeper insights into his personality and motivations than many biographies. – Clive Prince.