THE GODS OF IRISH MYTH


Despite being close neighbours, the cultures of England and Ireland are quite different in many respects. In England, you would expect a book entitled 'England's Immortals' to glorify and celebrate its sporting heroes. Try a Google search of the phrase and you will find that the majority of results are related to football, followed by rugby and cricket.
🔻
Virtually all results from a search of the phrase 'Ireland's Immortals' relate to this book by Mark Williams, with an abundance of glowing reviews for this 'History of the Gods of Irish Myths'. One review called it 'the go-to book on the gods of Ireland for the foreseeable future'.

As an 'Anglo-Irish' (brought up by an Irish father and English mother), I have always found it fascinating to compare the cultures of both nations. Ireland somehow seems to have a deeper living connection with its ancient mythological past. England does not in general seem to acknowledge its ancient gods, although the names of four Anglo-Saxon gods are memorialised in the days of the week (Tiw, Woden, Thunor, and Frige).

In his Preface, Williams addresses this anomaly with good insight about the effects that Christianity had on the peoples of Europe, suggesting that they had a problem with how to think about the gods of their pagan forebears. They might conclude that they had been "demons who should be forgotten or only contemplated with a shudder. Not so the Irish, who continued to make a conspicuous imaginative investment in their island's native gods; one of the enigmas this book addresses is why this habit of mind should have obtained in Ireland but not in (say) Anglo-Saxon England."

He explains how this uniquely Irish viewpoint was able to incorporate their ancient gods into the Christian worldview by the "assigning of exotic orders of being to former gods", such as fallen angels or superhuman beings with extraordinary powers. The author warns, however, that although "the literature we have is rich, references to lost manuscripts and tales makes it clear that we only have a limited sample of what once existed and what we have may not be representative."

A piece of blurb on the back cover, by R F Foster of the University of Oxford, calls it "an important contribution to the history of religion, nationalism and Gaelic culture; it is so well written as to be unputdownable". I agree it is well written, and the text is well laid out for readability, but I guess I am not the only reader who found it harder to pick up than to put down. Well, it is more than 600 pages, including acknowledgments, a useful glossary, bibliography, index, etc. and it weighs well over one kilogram.

Arranged in two parts, the first concentrates attention on medieval Irish texts and the second on writings in English from the 'Celtic Revival' of the late 19th century to the present day. It is the first part that may prove challenging for the general reader who is unfamiliar with Irish mythology. Here the author examines and analyses texts written in the Irish language, mostly from the medieval period. Some texts written in Old Irish, the oldest form of the Gaelic languages, date back as far as the seventh century.

One text, known as 'The Scholar's Primer', contains an amusing story of how the Irish language was first created. A legendary Scythian king, with the unlikely-sounding name of Fenius Farsaid (Irishman the Pharisee), was said to have assembled all the best bits of the languages scattered at the Tower of Babel and "from them pieced together the world's first artificial, 'perfect' language: Irish". Or perhaps, I wonder, if this was the first recorded instance of the famous Irish 'Blarney'?

In any quest to find the original Irish gods it is important to remember that all written texts, from the seventh century onward, were written by Christian monks and scribes after the conversion of Ireland. The scholar's immense challenge is to decipher their references to pre-Christian texts and oral traditions about an ancient race of supernatural beings known as the Tuath De (tribe of the gods). This phrase was modified by the scribes to Tuatha De Danann (Peoples of the goddess Danu) to avoid confusion with the Israelites, or peoples of the god of the Bible.

It is clear that all available texts were written in monasteries, because "all literary composition, vernacular and Latin, depended on alphabetic writing and book production. This was only available via the technology of ecclesiastical education." Therefore, "a secular literary tradition in Irish could only have emerged in a Christian context, and the Bible remained at all times the wellspring and core of Irish literacy." The secular, learned professionals responsible for vernacular composition were known in Irish as filid. This word, commonly translated into English as 'poets', meant much more than that. They were also genealogists, keeping records of aristocratic lines, and as such may also be considered as archivists.

The filid are therefore key to the preservation of the ancient romantic tales of the origins and actions of the Irish gods. They preserved a "body of learning which was not shared with ecclesiastical scholars". It appears that in general they did not believe in the ancient gods ("though we enumerate them we do not worship them"), as of course you would expect from those working under the aegis of the Roman Catholic Church. But these learned men wrote as they had been taught to read. Bible stories obviously carried several layers of meaning, so they likewise may have added their own constructions to the ancient texts. As Williams puts it, "it might be a development entirely of medieval scholarship, and thus tell us literally nothing about how those gods had been envisaged in the pre-Christian era".

Although not the author's fault by any means, reading this book can be quite frustrating. He is often at great pains to caution against accepting the medieval writers' versions of the ancient legends. Discussing the 'Mythological Cycle', a grouping of Old and Middle Irish texts of stories about divine beings, which provides much of the source material, he says: "...it is hard to gauge the degree to which any of these sagas reflect lost pre-Christian myths ... it is overwhelmingly clear that the mythic patterns and motifs present have been transmuted and transfused with meanings tailored to medieval, Christian Ireland - the period in which the sagas were written". 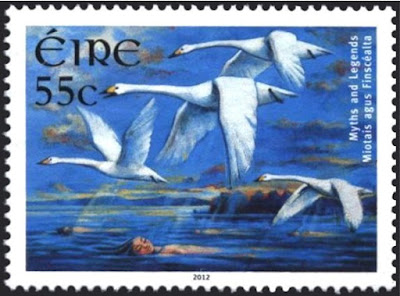 A good example of this is the most famous story from the 'Mythological Cycle': 'The Children of Lir', a tragic saga of humans with supernatural, magical powers and a jealous stepmother who intends to kill her husband Lir's four children. Unable to carry out the foul deed with a sword, she instead uses a spell to transform them into swans. It is a classic fairy tale until the Christian ending (evidently added by the medieval scribe) in which the children are finally transformed back into very aged humans, who receive a baptism from a kindly monk before their deaths. Hans Christian Andersen wrote a fairy tale called 'The Wild Swans' with similar themes.

Going back to the question 'Who are the Irish gods?' Most of us would be unable to name even one, while we could probably name several gods of the pantheons of Ancient Egypt, Greece, Rome and Scandinavia. The Irish gods are hard to pin down, shifting between human and divine attributes. "Such elusiveness is their calling card: they dissolve into the landscape, here one minute, gone the next... Paradox is key, for these gods are also fairies; they are immortal, but - like the Norse gods - they can be killed. They are simultaneously a pantheon and a people."

As a pantheon, they do have a father figure, a deity named 'the Dagda', meaning 'good god'. He corresponds to Zeus or Jupiter in that he has many children and is "conspicuously highly sexed." His daughter was Brigit, associated with spring, fertility and healing. Saint Brigit is her Christianised form, with a feast day on 1st February, the pagan date of Imbolc, the Celtic first day of spring. Of course Christmas and Easter are prime examples of how the Church was able to incorporate ancient pagan celebrations into its calendar.

Other outstanding Irish gods are: "the heroic Lug, a radiant and royal man between youth and maturity; the Morrigan, a gruesome war-goddess, shapeshifting between woman and crow, eel and wolf; the Manannan, the sea-god, speeding his chariot over the ocean churned to the colour of blood." It is said that they were eventually overcome by encroaching humans taking their space and took up residence in sidhe (hollow hills), where they might be perceived as fairies.

In the 'Celtic Revival' of the late nineteenth century, the Irish gods received something of a resurrection as writers and intellectuals looked beyond Christianity for inspiration. Did the gods emerge from their hiding places to inspire the re-birth of Ireland as a sovereign nation? Gladstone's Home Rule Bill had nearly succeeded in 1893. It was only a matter of time before Ireland became an independent country. Cultural and political nationalism was on the rise.

Two outstanding writers of that dynamic phase of Irish history, W B Yeats (1865-1939) and George Russell (1867-1935), provide much of the material in the second part of the book. The two men met at art school in Dublin and became lifelong friends, although not always in agreement. In 1896, Russell stated in a letter to Yeats that 'the Gods have returned to Erin', noting 'the increased faith in faery things' throughout the country. Yeats and Russell were instrumental parts in that spiritual and cultural revival: "Others have set important precedents, but fundamentally it was their creativity between 1885 and 1905 that shaped the ways in which the Irish gods were imagined by modernity."

While Yeats was famous for his interest in the occult, Russell was even more of a mystic, becoming an enthusiastic Theosophist. It is well worth reading this book for understanding the influence Russell had on Yeats and other great Irish writers, including James Joyce, and the wider society. Russell's influential role in Irish history and culture deserves to be better known. While a strong advocate of Irish independence from British rule, he was a strict pacifist and opposer of violence as a means to that end. That viewpoint, unfortunately, did not prevail, as shown in the bloody 1916 Easter Uprising, followed by summary executions. Ireland's nightmare continued for many more decades, as we all know, but its culture is alive and well, despite continuing arguments about the status of Ulster and the 'six counties', as well as religious disagreements.

Williams summarises the whole matter in a single sentence: "In short, the distinctiveness of the Irish setup lies in its restless refusal to resolve." While referring to its gods, it could equally apply to its people. -- Kevin Murphy.