The author lays out his stall in an introductory caveat lector, ‘How True Are These Tales?’: “I take the vast majority of accounts presented throughout at face value. I have made zero attempts to interview witnesses or hunt down any polts myself”. He continues, quoting the folklorist Andrew Lang, “We do not ask so much ‘are these stories true’ as ‘Why are these stories told?”
🔻
This of course is the true Magonian approach, and a similar caveat appears in the introduction to my own book on the UFO abduction phenomenon. Tucker’s contention is that the poltergeist represents an intrusion of a disruptive element – the trickster - into everyday life. A familiar figure in many of the world’s religions, mythologies and folklore, the Trickster inhabits the borderlands between order and chaos, habitat and wilderness. Tucker likens poltergeists to figures such as Hermes and Loki, both gods associated with boundaries and borders, shape-shifters able to appear in any number of forms, human, animal, non-corporeal; often of ambivalent sexuality – in Norse mythology Loki is both a father and a mother.

In this of course it resembles many other such ‘intrusions’, from UFOs to Hairy Hominids to apparitions of the Virgin Mary, as well as such familiar figures as Gef the Talking Mongoose of the Isle of Man, a personality he examines in some detail.

Tucker does not have much time for the theory, popular amongst some psychical researchers, that poltergeists are a manifestation of ‘Recurrent Spontaneous Psychokinesis’ (RSPK) promoted by the American psychical researcher William Roll. As there is probably less evidence for the reality of psychokinesis, whether spontaneous, recurrent or whatever, than there is of poltergeists, we are faced with the recurrent phenomenon of psychical researchers trying to explain one unexplained phenomenon by invoking another – a technique also popular amongst ufologists and others.

The author is particularly scathing of the researcher Nandor Fodor who combined RSPK with a particularly literal form of Freudian psychoanalysis, and seemed to be an early proponent of the ‘Birth Trauma’ hypothesis, which later had a brief burst of popularity as a contributory explanation for the alien abduction phenomenon.

The poltergeist often exhibits as an external manifestation of psychic and emotional disturbances in pubescent and adolescent girls. The Enfield poltergeist has been presented as an example of this, and the perhaps lesser known Battersea poltergeist of the 1950s, which centred around 15-year old Shirley Hitchings.

The phenomenon that caused such chaos in the Hitchings household seemed to control Shirley’s life to a remarkable extent, even determining her choice of boyfriends and preventing her from holding down a job. It seemed to monitor the boundary between childhood and adulthood, home and the outside world, until gradually fading away and allowing Shirley to develop her individuality and control her own life. Or did Shirley control the poltergeist, creating it as a way of breaking boundaries that she felt were imposed on her, and eventually taking control of her own life?

Our old friend Gef the Talking Mongoose features in some depth in Tucker’s analysis, and he presents a very clear ‘Trickster’ figure, an animal spirit that talks directly to humans, usually in an enigmatic, deliberately confusing manner, mixing apparent nonsense with sometimes acute observation. Although Gef’s appearance seemed to centre around the young girl in the family, as she grew and joined a wider community, the creature seemed to attached itself to, or was taken over by, her father, a person who had his own issues of liminality, after moving from a busy commercial life in a city to scraping an existence in his lonely Manx farm. 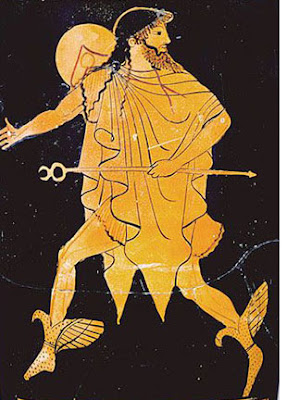 Tucker introduces the idea of the Trickster poltergeist by examining the nature of the Greek god Hermes. A guardian and transgressor of boundaries, his nature is reflected in the poltergeist, which evade boundaries by slipping through walls and locked doors, but at the same time can reinforce those boundaries by blocking doors, or misplacing keys, trapping the victims of its trickery inside or outside their homes.

He looks at cases which display a particular ‘tricksterish’ quality. He lays out “a catalogue of poltergeist tricks and humour”. The experiences described include instances where ‘the phenomenon’ seems to be deliberately laying false clues as to its nature, or deliberately producing physical evidence which is totally worthless. He cites the case of the Black Monk of Pontefract which left tooth-marks in food, and a case from Germany in 1722 where a poltergeist left a half-eaten stolen pancake as evidence of its presence This recalls the Simonton UFO contact story from 1961, where the alleged aliens presented Wisconsin farmer Joe Simonton with a pancake they had cooked on board their UFO. On analysis it turned out to be – a pancake.

It is perhaps surprising that Tucker does not seem to notice the poltergeist nature of so many UFO contact reports, which display many of the tricksterish qualities he describes, although he does give an account of the range of UFO related phenomena at the ‘Skinwalker’ ranch. In fact the possible relationship between ‘poltergeist’ and UFO was suggested by Peter Rogerson, in his first contribution to MUFOB/Magonia in 1969 wrote: “Among the ideas worth examining [is] the possibility that hauntings, for example may be highly localised [UFO] flap area”.

And of course the other way round, ‘flap’ areas like the Mothman-haunted Ohio valley explored by John Keel, may be a widely distributed poltergeist effect.

Many other Fortean phenomena are drawn into poltdom. I had never thought of the numerous ‘phantom sniper’ reports of shattered car windscreens as being poltergeist in nature, but of course they are very much the same sort of physical phenomena as flying rocks and tossed bricks. In fact it would be hard to discover an anomalous Fortean phenomena which could not find its way into this catalogue of poltergeistery, from disappearing keys to monstrous mystery animals.

Perhaps this wealth of incident and information is where this book fails, although it is not its greatest failing. I think there is just too much in it. Individual cases are referred to at different points in the text, and used to illustrate different facets of the phenomenon. There is just so much here that the author’s thesis get buried in the complexity of the materials he presents. It is 350 pages long, and really needs to be drastically pruned. Sheer weight of anecdote is no substitute for a clear argument, something that UFO researchers have also failed to discover.

That said, this is a fascinating book, the reports and experiences it describes provide very nourishing food for though, and quite apart from anything else, are usually very amusing, as is much of this writer’s output.

Oh, and the worst thing about the book? Despite the massive amount of information in it, and the hundreds of cases described which you would want to refer to, and being 350 pages long, it doesn't have an index! – John Rimmer