Luis R. González. An Alien in My Mailbox. Ediciones Coliseeo Sentosa, 2021.
Regular followers of Magonia Review will know that from time to time I draw their attention to new issues of postage stamps featuring subjects of interest to our readers. These have often been stamps depicting legends and folklore, or mythical creatures and cryptozoology. From responses I have received it is clear that there is quite a community of philatelists with Fortean interests.
🔻
Now one of Spain's leading ufologists has taken on the task of cataloguing and reviewing stamps and other philatelic items with ufological themes, and also taking in aspects of science and science fiction which relate to ufology and speculative space travel. The book evolved from an article by Luis González in the Spanish magazine El Escéptico, entitled 'A Martian in my Mailbox'. The present English language book is a revised version of the Spanish edition, and includes additionally two catalogues of Star Trek and Star Wars stamps.
Perhaps these is some significance in this study being undertaken by a Spanish ufologist, Spain being the home of the mysterious 'UMMO' affair, where what were purported to be messages from aliens were indeed being delivered to ufologists through the postal service.
González traces the first specifically UFO related postage stamp as far back as 1975, in an issue from Equatorial Guinea commemorating USA/USSR collaboration in space research. These stamps depicted such figures as Yuri Gagarin and John Glen and various pieces of scientific hardware. But two of the higher value stamps in the set were inscribed 'Colaboración interplanetaria', one showing an enhanced version of the traditional Adamski saucer, along with a couple of Arnold UFOs, also enhanced with jet trails. The other stamp showed a 'Saturn-shaped' UFO, again enhanced with what appear to be jet engines! This resembled no known UFO report, but Gonzales's detective work has traced the image back to a French comic book.
The second country to issue a UFO stamp set was the small island state of Grenada, in the West Indies. This 1978 issue did at least have some relevance to the country that issued it, as Grenada's then Prime Minister, Eric Gairy was something of a UFO buff, who managed to convene a United Nations hearing into the topic, which was graced with the attendance of a number of ufological luminaries like Jacques Vallée and J. A. Hynek (but not, unfortunately, your reviewer!)
This did little for Gairy's political fortunes, as he was deposed the following year. It is worth pointing out that a number of conspiracy theories have arisen about this, assuming that the USA's invasion of the island was to depose Gairy who was about to reveal the truth about UFOs. In fact the invasion was four years later in 1983, and its aim was to depose the then Prime Minister, the Marxist Maurice Bishop. **
This was probably the first and last time any country had a legitimate reason to issue a set of UFO stamps, which would have ended this book at page 25. Fortunately a great number of countries – and indeed would-be countries, might-have-been countries, and never-were countries – have seen very good reasons to issue UFO stamps, to help swell the coffers of the issuing authority.
One way of getting a UFO theme onto your stamps is by commemorating a famous science fiction writer, a tactic which gave most French-speaking countries the chance to put out stamps with all sorts of fantastic flying objects on them under the name of Jules Verne. An interesting set from Israel marking a science fiction convention cleverly linked the writers' works with themes from the Bible and Jewish lore – comparing Verne's spaceships to Ezekiel chariot, a classic 'historical UFOs' meme, and Asimov's robots to the legend of the Golem.
As I suggested earlier, many of the stamps depicting UFOs and related topics have come from postal authorities which are, to say the least, debatable. In the time after the break-up of the Soviet Union, a number of 'stamp-issuing entities' emerged with very slender claims to authority. In a chapter entitled 'The Great UFO Postal Wave', the author catalogues hundreds of these 'stamps' which have very little postal or artistic value. 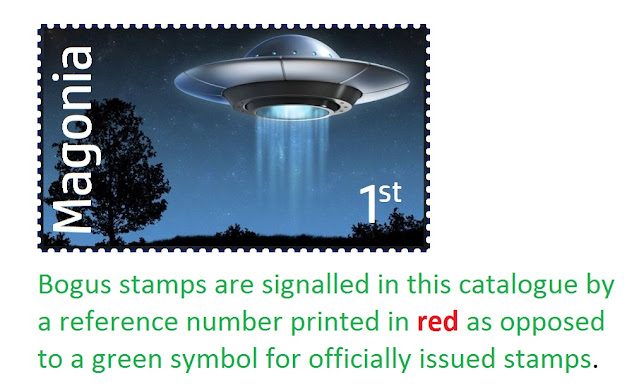 Some may have been issued under the authority of a regional or break-away government, but most seem to have been produced by speculators with little or no connection to the location whose name was printed on them, and few if any were ever seen for sale in that territory. Even if a stamp has the name of a legitimate country printed on it, there is no guarantee that it has any official authority. There bogus issues are signalled in this catalogue by a reference number printed in red, as opposed to a green symbol for officially issued stamps.
But even with legitimate issues, authorised by an actual real live country, most are produced by philatelic agencies who sign contracts usually with small and sometimes rather impoverished states. They produce stamps depicting topics with no connection at all to the client state, but likely to appeal to collectors in Europe, America, and increasingly China. An appendix to the book includes an interview with a stamp designer who has worked for a number of governments and philatelic agencies, and gives some idea of the machinations behind these issues.
But outrageously exploitative sets are not solely the province of impoverished Third World nations. The numerous stamps, sheets, booklets and other rip-off fripperies put out by the UK's Royal Mail, exploiting the Star Wars franchise is shameful. And there are plenty of other countries that should know better – Australia, I'm looking at you, for one.
However, even though many of these stamps are speculative productions for the collectors' market, some are nicely produced and interesting, and in a few cases do try to give an accurate impression of the phenomenon and are not afflicted with ludicrously high face values. I particularly like a series from Tanzania showing reasonably accurate – if slightly 'tidied up' - depictions of UFOs from actual cases. In collecting this topic it is definitely a case of caveat emptor, which this book will help you do.
González has conducted some intriguing detective work, finding the origins of many of the images used on stamps, often tracing them back to distorted versions of actual reports, or sometimes to a paperback cover or comic strip. One particular image that intrigued me, and is interesting in how it demonstrates the rapid diffusion of the UFO image in popular culture, is a non-postal souvenir stamp issued in 1951 for the Festival of Britain. A three (old) penny label issued to raise money for the Greater London Fund for the Blind depicts the travelling Festival Exhibition building which toured the country, with a giant saucer shaped UFO hovering over the structure and sending some sort of no doubt celebratory force-beam down onto it.
This book is a real labour of love, and Luis Gonzáles has produced a guide, catalogue and handbook which I heartily recommend to all collectors navigating this branch of philately, and also to those interested in the manner in which the stories and images of the UFO phenomenon are transmitted in popular culture. It's not just for stamp collectors.
The volume is beautifully produced, every page replete with high-quality colour reproductions of the stamps described. It is published in Spain, and an affordable paperback version is available through Amazon [link below]. An excellent addition to any philatelic or ufological library.
https://www.amazon.co.uk/Alien-my-Mailbox-Luis-Gonz%C3%A1lez/dp/B09GZ98YLJ/ref=tmm_pap_swatch_0?_encoding=UTF8&qid=1654790410&sr=1-1
** See comment below.

Maurice Bishop was very popular in Grenada and was viewed in the US as anti-American. Nonetheless, the US did not invade until Bishop had been overthrown and many had been killed by the coup plotters.

Thank you for the clarification.