Nick Redfern. Monsters of the Deep. Visible Ink, 2021.
Nick Redfern is a reliable chronicler of Fortean mysteries and natural oddities. Although he is open to imaginative speculation – in this book for instance presenting a semi-plausible physiology for fire-breathing dragons – he is careful to also offer more mundane explanations for the stranger observations.
🔻This makes his books both informative and very entertaining, as he is comfortable with reporting the weirdest aspects on reported phenomena and makes no attempt to edit the material to support any one viewpoint.
The book is in a broadly encyclopaedic format, divided into a number of sections such as 'Ocean Creatures, 'Inland Water Monsters', 'Humanoids of the Water' and 'Nessie-like' creatures, as well as legendary and mythological monsters, and a look at explanatory theories. Many of the entries are based on first-hand accounts of encounters and investigations, some from researchers working with the Centre for Fortean Zoology.
One particular account, researched by members of that organisation, involves the sightings of a crocodile-like creature in a small lake in the West Midlands, Redfern's home territory (although he now live in the USA). Surrounded by the M6 Motorway, suburbia and sprawling out-of-town retail parks, this seemed an unlikely spot for a mystery creature. Redfern describes the carefully conducted on-site investigation and clever detective work that produced the rather surprising solution to the mystery.
All the usual water monsters are listed, with extracts from a wide range of sources, from historical texts to contemporary records, but Redfern also branches out into some of the lesser-known regions of Fortean water-lore. One such is the 'wulver'. One writer describes this as “the Fishing Werewolf”, semi-humanoid creatures which allegedly are “powerful swimmers and use their speed to catch fast-moving fish in the rivers and small lochs nearby”. It seems to be a kindly sort of monster which would occasionally leave some fish that it had caught outside the homes of poor members of the local community. 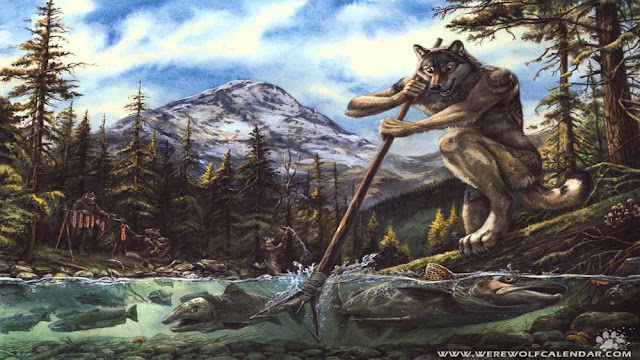 The basic details of the wulver are taken from the book Shetland Traditional Lore, published in 1933 by Jessie Margaret Saxby, although Redfern quotes a possible earlier source from the late nineteenth century, recorded by Elliott O'Donnell, a writer, he is careful to point out, noted perhaps more for the imaginativeness of his strange stories rather than their accuracy. However the wulver seems to have been totally invented by Ms Saxby, as she seemed to have been rather disappointed by the scholarly interpretation of a Shetland place-name, Wulvershul, as meaning the 'Fairy Knoll' and felt that it should be something much more dramatic, hence the watery werewolf. The story is now all over the Internet, along with suitable illustrations (as above) of the fishing crypto-cryptid.
In general, however, possible mundane explanations of maritime monsters are offered as openly as the 'authorised myths' or speculative theories. Redfern presents a balanced overview of an incredibly broad range of anomalous phenomena. My only major criticism is that I would like to have seen more direct references to the sources of the stories and documents quoted, rather than an (admittedly extensive) 'Further Reading' list. But all in all a very good addition to the Fortean's library, and at a very reasonable price for a 360-page book.