ON HIS MAJESTY'S VERY SECRET SERVICE

Journalists often use the language of magic to describe political events. They refer to the "Dark Arts” of politics, political advisors are described in semi-occult terms as 'Svangalis' or 'Rasputins', who “drip poison” into the ears of our political leaders. In this book Dr Francis Young shows how the idea of magical involvement in the political life of Britain has a long history and has played a major role in the political life of the country.
🔻
Historians no longer talk of the 'Dark Ages', but after the Roman withdrawal Britain did fall into "a period of historical obscurity". It was in this period that Merlin arose as a figure associated with kingship, emerging as a seer and prophet in King Arthur's court, as told in Geoffrey of Monmouth's Vita Merlini, in the twelfth century. It was Merlin's subsequent reputation as a prophet that encouraged monarchs to seek, and for their advisors to assume, the role of such a magical advisor.
Although rulers might seek the advice and magical protection of astrologers and alchemists and other occult practitioners, these figures also presented a threat. An astrologer, for instance, through reading a king's birth chart, would be able to predict the time of the ruler's death. Mention of “dripping poison” recalls that poisoning was seen as a magical act, an invisible killer that could strike at any time, in the absence of the perpetrator. Magical acts that were intended to harm the monarch were treated as treason, such as an alleged plot to kill Henry IV by smearing his horse's saddle “by necromancy and spell” with an ointment that would “before he had ridden ten miles he would be quite swelled up and die suddenly, sitting upright in his saddle.”
Not surprisingly Henry was determined to apply the Statute of Treason against magicians, and parliament passed an Act banning alchemy. Although the practice of magic was never actually a crime in itself in the mediaeval period, the law made it easy for accusations of magical malpractice to be one of the easiest ways to make an accusation of treason and discredit a political opponent. The author points out that magic “lent power to the powerless, especially to those who felt powerless at the centre of power – such as 'spare part' members of the royal family.” I will forbear further comment!
But rulers also felt that the powers of magical practices could help them and strengthen their hold on power. Edward IV seems to have been advised by an Augustinian canon, George Ripley. Ripley, who may have been the first person in England to popularise the figure of Hermes Trismegistrus, claimed to have corresponded with Edward while studying at the University of Louvain, and to have revealed “alchemist secrets he would share with no-one else”.
The other monarch most associated with alchemical, astrological and other occult practices was Elizabeth I, probably England's most cursed ruler, with occult plots against her continuing to the last years of her reign. It is her advisor, John Dee who perhaps came closest to the character of Merlin in the historical record, although the degree of notice Elizabeth paid to Dee's advice varied, and was probably never as much as Dee himself believed. His main influence on Elizabeth's policies was his promotion of the idea of a British Empire, proclaiming that most of the New World was already in Elizabeth's possession by right of its discovery by Prince Madoc of Gwynedd, a distant ancestor of the Tudor dynasty.
The Stuart kings had a long association with occultism in their Scottish realm before assuming the throne of England. James I/VI was keen to be seen as an expert on witchcraft and the occult, and Young suggests he may have attempted to portray himself as a 'philosopher king' or as a magus, like Shakespeare's portrayal of Prospero. During his reign he took a personal interest in a number of witchcraft cases, and even challenged the Archbishop of Canterbury's opinion on the nature of witchcraft.
Young sees the Stuart era, the execution of Charles I and the turmoil of the civil war as signalling the beginning of the decline of magical influence in English government and politics, but not due simply to a growing attitude of scepticism to occult claims. He points out that William III and Queen Mary seem to be the last British monarchs to have an occult adviser in the figure of the Whig politician Goodwin Wharton, a practicing alchemist who, like Dee, claimed to communicate with angels. 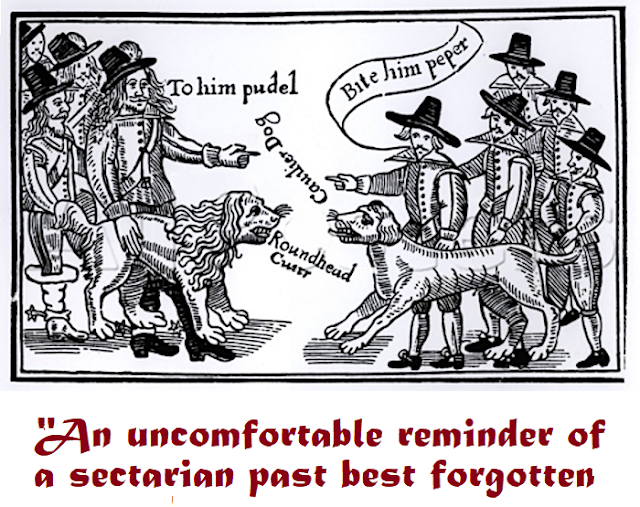 Rather, because of the claims and counterclaims made by all factions in this turbulent period, practices such as prophecy, alchemy and astrology were seen more as political tools than genuine paths to truth and knowledge. Young describes them as “an uncomfortable reminder of a sectarian past best forgotten”, ignored as embarrassments by the ruling classes, whist remaining popular with many ordinary people.
Probably the last overt example of magical practice in Court life was the ceremony of the Royal Touch, the act of the monarch touching people afflicted with the 'king's evil', the skin disease scrofula. This may have been initiated in the reign of Henry III (1216-1272) as a way to emphasis the divine authority of the king. Queen Anne was the last monarch to practice this rite, perhaps encouraged by Goodwin Wharton as a way to demonstrate her continued legitimacy in the Stuart line.
Elite belief in magical practices continued to decline throughout the Hanoverian period. The Elizabethan Witchcraft Act was repealed in 1735, replaced by an Act outlawing the practice of 'pretending' to be a witch. Although popular belief in witchcraft continued, the official attitude is indicated by the fact that eighteenth century court cases involving allegations of witchcraft were more likely to be prosecutions of people who attacked individuals they suspected of being witches, rather than the alleged witches themselves.
Perhaps the last person who might have claimed the role of a modern Merlin was William Blake, who inaugurated a 'mystical nationalism' in his epic Jerusalem: The Emanations of the Giant Albion. Dr Young traces his influence through to more contemporary figures like John Michel and other proponents of 'Earth Mystery' beliefs.
The growth of Spiritualism in the second half of the nineteenth century changed the nature of supernatural belief, and made certain forms of it respectable again in elite society, an acceptance which was broadened and deepened by the reaction to the carnage of the First World War, as the population attempted to come to terms with the massive loss of life. Young notes the involvement of occultists in the Second World War, and describes a number of attempts to use occult powers to influence the progress of the war in favour of Britain.
The later developments of neo-Paganism and the growth of England's only indigenous religion, Wicca, have have also had resonances in the political life of the country,  Modern occultism in Britain, he suggests, has been influenced by political thought at both side of the spectrum, with radical feminist and pacifist manifestations such as the Greenham Common women's peace camp and the growth of 'Goddess Spirituality on one hand, and the more traditionalist and folk-nationalist elements of the Earth Mysteries believers on the other. And occasionally both ends moving into very strange, and sometimes alarming, political extremism.
This is an engrossing account of what has remained a little explored and understood area of historical research. In his Introduction Dr Young remarks that although social, medical and intellectual historians have taken on board the importance of supernatural beliefs in their studies, there has been no corresponding acceptance of this among political historians. He finds this surprising in view of the central importance political historians increasingly give to religious beliefs in the Medieval and Early Modern period. Perhaps this excellent study may stimulate some of them to reconsider their attitude to the subject.
For those of us who are not political historians, this is a scholarly, but also a very readable and accessible introduction to an important, but neglected, strand of British history.