MARKS OF THE BEAST

"In Jean-Paul Sartre’s 1938 novel Nausea, the protagonist Roquentin descends into an existential crisis when he starts to perceive the viscosity of the world around him – that is, its malleability and lack of consistency – which Mary Warnock explains via a comparison to treacle, a substance that is nether solid nor liquid, lacking a defined shape and boundaries."
🔻
This reference to Nausea in the introduction to Jack Fennell’s Rough Beasts, gives him a useful metaphorical signpost on which to indicate what’s monstrous. Monsters do not just break things and people but our sense of time and space, puncturing and disrupting as they spill through our minds, bodies and social relations. Sartre is also conjoined with Albert Camus warning to us that the monster, in fact and fiction, is close at hand to spread itself through a meaningless (For Camus) universe.

‘The absurd depends as much on man as on the world. For the moment it is all that links them together. It binds them to the other as only hatred can weld two creatures together.’

So projections of self-loathing appear to create monsters of a very human and very literary kind that are now, according to Jack Fennell, brutally existential; existing in the realm of the private individual and the socio-political history of Ireland from 1800-2000.

The Great Famine (1845-52) takes central ground in Rough Beasts. It’s a catastrophe which Fennell sees as a horror narrative. It destroyed a dying, though romanticised, Gaelic culture: the monstrous effects of the famine. The atrophy of your visceral organs from starvation was experienced as if a scene from a gruesome chapter in a Gothic novel. Drawing upon a folklore catalogue Fennell takes the example of fear gorta (“hungry grass”) a cursed patch of vegetation. People become so hungry that they were prepared to eat raw food – the grassy sod. Fennell refers to William Carleton’s 1847 novel The Black Prophet to illustrate the terrible effects of starvation. Here the most dreadful sight is skeletal children that are wan and yellow with ‘a spirit of pain and suffering on their innocent features.’ 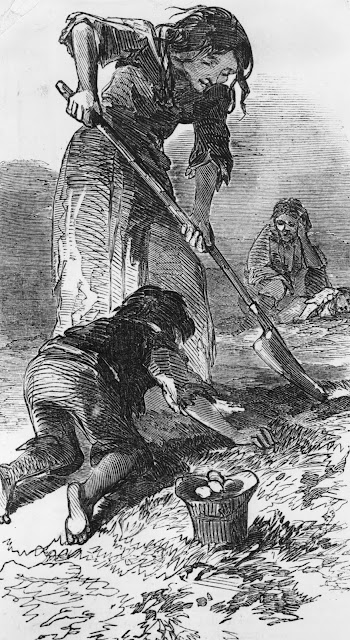 Both Red Hall and The Squanders of Castle Squander (Both 1852) are further Carleton fictions that capture the prevailing mood of despair and horror. Though Fennell admits that Carleton’s prose style is overwrought especially when it comes to describing acts of cannibalism (Rough Beasts remarks on ‘real’ cases of cannibalism in the Galway / Mayo region but generally there’s scant evidence of such acts occurring in the real famine.)

Other literary monsters of the famine years are examined. Extracts from a poem called 'The Famine' (1849) by James Clarence Mangan come across as truthful but mediocre and declamatory: in contrast to Mangan’s fated life of poverty and probable death from cholera, that’s so tragically typical of the times, and will hopefully be remembered more than his writings. Whilst George Moore’s (1903) short story 'A Play-House in the Waste' is of much greater literary value and sociological importance in revealing the ‘monstrous’ class division that the famine exposed.

Fennell covers a lot of generic ground in Rough Beasts or maybe I should say follows a viscous trail. We have chapters on ghosts, magic, Faustian pacts, zombies, vampires, shape-shifters and haunted spaces. The most famous writers considered here are Sheridan Le Fanu and James Joyce. Le Fanu wrote a masterly novella Camilla and the much anthologised story 'Green Tea.' Fennell has perceptive points to make here. But it’s his inclusion of the Circe episode from Joyce’s Ulysses that intrigued me more. Stephen Dedalus is trapped in a trial sequence in the Nighttown of Dublin that culminates in a vision of his mother as a horrific, decayed ghost in a brothel. The episode is effectively interpreted as a nightmarish shape-shifting.

"...Nighttown is an inverted, disorded, heterotopian image of the rest of the city: anything that does not belong in Dublin-at-large ‘belongs’ in Nighttown. It is, by necessity, a part of the city where the commonplace becomes estranged and potentially threatening, a 'grotesque world'..."

This is a fascinating Joycean tent of grotesquery. I was persuaded that he came close to writing a darkly comic horror-fiction packed with internal and external monsters. Yet it’s a pity that Rough Beasts didn’t also mention Joyce’s great literary companion, Samuel Beckett. I would have thought Beckett’s bleak and starkly extreme novel The Unnameable warranted inclusion (A solitary head in the dark condemned to speak of its suffering is a suitable monster of modernism – both Irish and universal, or is this too solipsistic for Fennell’s argument?)

If the quality of fiction considered in Rough Beasts is highly variable, for there’s a long paraphrasing of some mediocre texts, this is more than compensated by Fennell’s philosophical tone of voice. He is always scrupulously serious and exact in exploring the ramifications of the idea of the monster and the monstrous events that occurred in 200 years of Irish history. And in his final chapter 'Conclusions' Fennell admirably summarises the image of the monster as being a necessary aberration to break through the country’s repressive ideologies (The Catholic Church and the recent 21st century mismanagement of the Irish economy.)

"Not only is the monster’s disruptive existence preferable to this kind of domination, but it can also be seen as a release from ideology, social conditioning, hegemony, and historical determinism: the monster may not be our friend, exactly, but its presence asserts that the sclerotic social systems we live in are not immutable."

To raid, for a moment, the poetic store of W.B.Yeats, rough beasts may always be slouching towards us to be born (In the form of famine, civil war or pandemics) but it’s our accommodation of the monster, both real and fantastic, and its unintended consequences for changing our world, for good or ill, that matters. Rough Beasts presents a compelling argument for us to be roused. – Alan Price.