Nick Redfern. Monster Diary: On the Road in Search of Strange and Sinister Creatures, Anomalist Books, 2012.


Picture the scene. You are sitting with Nick Redfern in the Rampant Ram on the edge of the moors, there is a storm blowing outside. It must have taken down the power lines because the inn is lit only by the open fire and flickering candle light. In the corners groups of the local sons of the soil sit around talking in low whispers of the fearsome thing that has wreaked havoc among their beasts.
🔻
The only sound apart from the low voices and storm outside is that of the black helicopter hovering overhead. Suddenly the door flies open and an old weather beaten wizened man stumbles in from the howling wind and rain. He approaches the barman: “Be ye that Nick Redfern chap wot has written all them books about spooky things then?” Nick signals assent.

"Ah Nick lad I will tell about ‘orrible things out on them moors, things wot would make your ‘air stand on end, if you had any. Cats the size of dogs, dogs the size of boars, luminous green donkeys and eels as thick as elephants’ trunks and hairy ape men wot hang about canals. There’s things wots going on here, ‘orible things; you’ll grow hair just so it can stand on end, Nick lad. Up in’t big house they are torturing poor little pussy cats to death, so as to raise the great big ‘orrible pussy cat from hell, wot’l lick you all to death. And down in’t valley that’s where the ‘orse rippers live, who rip up ‘orses so’s to raise the bloody great ‘orse from ‘ell, wot is a lot worse than the bloody great pussy cat from ‘ell. I ‘erd you live in Texas, Nick, my sister says there’s ‘orrible things there too, like werewolves and men wot fly. And that George Bush, he tortures pussy cats an' all, so's raise an even nastier gert big pussy cat wot’ll eat that Hilary Clinton for dinner so as brother Jeb can get on the throne.” 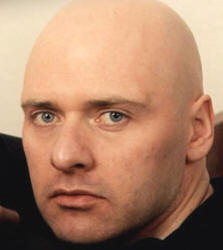 As we leave the inn we are greeted by a silvery haired old gentleman who offers to take us in his vintage Rolls Royce to his country house, where he has an exquisite copy - bound in human skin - of the much forbidden Liber Infernalis, a work perhaps better known by John Dee’s much expurgated translation The Black Boke of Bludie Blasphemies, a work nevertheless condemned by King James VI and I to be burnt by the public hangman. Perhaps we ought to decline.

Welcome to the world of Nick Redfern, which like the spoof above seems to be dominated by strange experiences, strange characters who tell him tales of stranger and nastier things and even stranger and nastier doings. I leave it to the reader’s imagination as to whether these characters are fictions created by Redfern for dramatic effect, or are the inheritors of the tradition of the people who used to send thirty-page, much capitalised and underlined letters in green ink to Jenny Randles back in the day. Either way they have an uncanny knack of sharing Nick’s interests and beliefs.

These include giant eels in English canals, flying things in America, animal mutilations, rumours of government conspiracies and of dreadsome rituals. These include the aforementioned pussy torturing, the dreaded Taigheirm, in which black cats were said to be roasted alive on a spit one after the other in order to sacrifice to the “elder gods”, to raise the aforesaid bloody great pussy cat from Hell. However, rather than being an ancient Highland tradition, this seems to have been the product of the Gothick imagination of the German folklorist and occultist Georg Conrad Horst, whose Die Deuteroskopie might well deserve a place in honour beside the Necronomican in the restricted book cabinet of the library of  Miskatonic University.

Readers will gather that I see Nick Redfern as being in the tradition of the story teller, who like John Keel, uses folkloric themes in his work but weaves around them a storyline. This is really a book to be read out loud, perhaps before a roaring log fire in the Rampant Ram, or better still round the camp fire, throwing a fitful light into the darkness and casting sinister shadows. -- Peter Rogerson.

Cheers for the fine review!

Just one quibble: Re the interviewees and the matter of "...I leave it to the reader’s imagination as to whether these characters are fictions created by Redfern for dramatic effect...", it's worth noting the following:

Every interview/interviewee was digitally recorded. Plus, all the interviewees have to sign waivers to avoid "trouble" with the publisher, and to confirm they are fine with the way they are presented. So, each and every one is indeed a real person with waivers kept on file etc.

And where you say of the interviewees, "...they have an uncanny knack of sharing Nick’s interests and beliefs...", it's worth noting that I interview plenty of people every year who don't agree withe me on Fortean topics. But, as they are wrong, I dont use their data.

So, it's more correct to say I don't just get endless accounts of what I want to hear, but I also get numerous accounts that I massively disagree with, but that don't see the light of day.

This review was great fun---until the part about Jeb Bush taking the throne. At that point, you crossed the line into horror so grotesque and obscene that I blacked out.

"I interview plenty of people every year who don't agree with me on Fortean topics. But, as they are wrong, I don't use their data."

That's pretty much how we operate over here at Magonia as well, Nick.