If this book is any guide, there are a lot of people out there who claim to have seen fairies. Its 350+ pages are crammed full of first-hand sighting reports, most of them not duplicating the many accounts recorded in my own book Fairies: Real Encounters With Little People.
🔻
Marjorie Johnson collected her reports over several decades, and the mystery is that she was never able to get her book published during her life-time (apart from editions in German and Italian), since it is a unique database of 20th century fairy reports.

Simon Young, who was responsible for bringing about this belated English-language edition, details its history, and Marjorie’s involvement with the Fairy Investigation Society, in his comprehensive introduction.


Reading these strange accounts one after another is a disturbing experience. They give the impression that the countryside is heavily populated with little people who live alongside us but are never seen by most of us. Can this really be true? Common sense tells us that it isn’t, and that there must be some other explanation. How can we find out what it is? These are not questions that the author tries to answer, and if we are to solve the mystery, it will be necessary to adopt a more critical stance than hers.
When considering, in a very general way, the fairies’ appearance, there is one major feature that separates one kind of fairy from another: some have wings, and some don’t. Although today many people assume that all fairies have wings, as Simon points out they did not feature in early fairy lore, first appearing in fairy art in the late 18th century, and then in fairy accounts from the 19th century onwards. Therefore any sightings of winged fairies, which account for around half of the reports in this book, are suspect. The witnesses clearly believe they are seeing winged fairies, but it seems likely that the brain is projecting onto the external world a vision of what the witness considers a fairy looks like. Why this should happen is another question entirely! 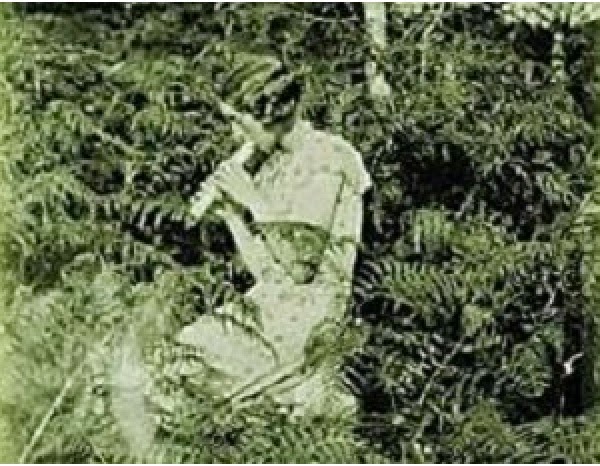 There is another problem with the winged fairies: they are usually interpreted as some kind of nature spirits by those whose world-view incorporates such things. Far be it from me to criticise such beliefs or pronounce them misguided, but I do not subscribe to them myself. Marjorie Johnson was very much a believer in nature spirits, writing of ‘Devic Guardians’, etc. The photograph of Marjorie which appears on the front cover tells us all we need to know: she is sitting in the bracken playing on a home-made bamboo pipe. To the bottom left is an area looking like white mist, where light has ‘fogged’ the film. This obvious explanation is rejected by Marjorie, who prefers to think that fairies were attracted to her music and were ‘building-up out of the ectoplasm from my aura.’
If we disregard for the moment all those accounts that include winged fairies, nature spirits, and other whimsical creations, we are left with what I consider to be a real mystery: the totally unexpected sightings of little people doing strange things. These are the accounts that are, to me, the most puzzling and disturbing, as there seems to be no obvious explanation for them. In 1953 a 5-foot figure in bottle-green clothing, a conical fur-edged hat and knee-boots was seen to run across a road in Ewell, Surrey, disappearing before reaching the kerb; a child aged 3 or 4 watched a ‘funny little man’ with a long pointed cap working in the beans in their garden at Walesby, Nottinghamshire; some people who had had a moonlit picnic on the moors near Land’s End, Cornwall, saw in the car headlights a little man just over 2 feet tall with a hairy face, long arms and long pointed feet, wearing a hat looking like a mushroom; in 1896 a Shetland woman walking to a neighbouring house saw a little man in dark brown clothes and with a long beard staring belligerently at her and making loud grunting noises; and so it goes on. Sometimes everyone present sees the creature(s), but this is not always the case.
When judging any of the accounts in this book we have to rely on the veracity of the witnesses. I’m sure they aren’t all lying – but some may be deceiving themselves, or misperceiving what they see. It seems certain that in the majority of cases, the witnesses believe they are recounting a genuine event: they believe what their eyes and brains are telling them they are seeing. In order to determine exactly what is happening, a detailed analysis of each witness would need to be undertaken – of their beliefs and expectations as well as their physical condition. Medical evidence is growing to show that there are mechanisms by which people can and do see things that are not physically there. For example, as I was reading this book, recent research into AMD (age-related macular degeneration) was reported in the press [Daily Telegraph, 21 July 2014], to the effect that some sufferers see visions. An unnamed 87-year-old retired teacher saw a ‘funny little miniature woman coming up under [a table]… She had a smiling round face looking up at me, and as I was watching it grew, like a genie coming out of a bottle. I couldn’t see the feet, just a head and shoulders. Her face was tanned and shiny, like someone who had been working out in the fields and was covered in perspiration. It is thought that the faces you see are often from way back in your past. I think this was my Cornish grandmother.’


Of course we cannot explain sightings of fairies by saying that all witnesses must have AMD, but if such visions can be experienced by people with AMD, it is likely that other conditions can also trigger similar visions and hallucinations. The form the vision or hallucination takes may well be influenced by the witness’s belief system, with believers in visions of the Virgin Mary being prone to see Our Lady, believers in aliens being prone to see creatures from UFOs, and believers in nature spirits being prone to see winged fairies.
Unfortunately Marjorie’s presentation of the reports she has collected is uncritical. There is no attempt to analyse the reports dispassionately, or to search for any explanation other than the (to her) obvious one, that the witnesses are blessed with the ability to see nature spirits. But the true value of Marjorie’s efforts in collecting these reports is that we now have the raw material for a proper, unbiased, study of fairy sightings, and it is to be hoped that someone with the knowledge and ability to tease out all the clues can come up with a plausible explanation.
Wherever the truth is to be found, this book is essential reading for anyone with the slightest interest in fairies and the Little People.

Thank you for this review, Janet. I'm adding this to my library.

Don't forget to order it using the link below the review!

Looks like a great book for study. I've had many encounters with fairies some I describe on this page here: http://www.realitywalker.com/nature-spirits/fairy-tales-and-tales-of-fairies/