The lead article in this issue is 'From My Pennine Valley Notebook', by David Clarke. Yes, the title is a rip-off of John Keel's classic Flying Saucer Review piece from the 1970s, 'From My Ohio Valley Notebook', and it was inspired by Dave's introductory paragraphs, where he states: “folklore seems to be very much in the making in the haunted areas of the Pennine Hills into which I have been wandering in recent years”.
🔻
The full article describes the spooky experiences of a couple of policemen, patrolling the semi-industrialised valley of the Little Don, which seems very much the same sort of liminal, marginal area that Keel reported from in his Ohio Valley travels. Their experiences seem to combine traditional ghost and fairy-lore (or as we are in deepest Brigantia, perhaps that should be boggart-lore) and modern UFO reports. 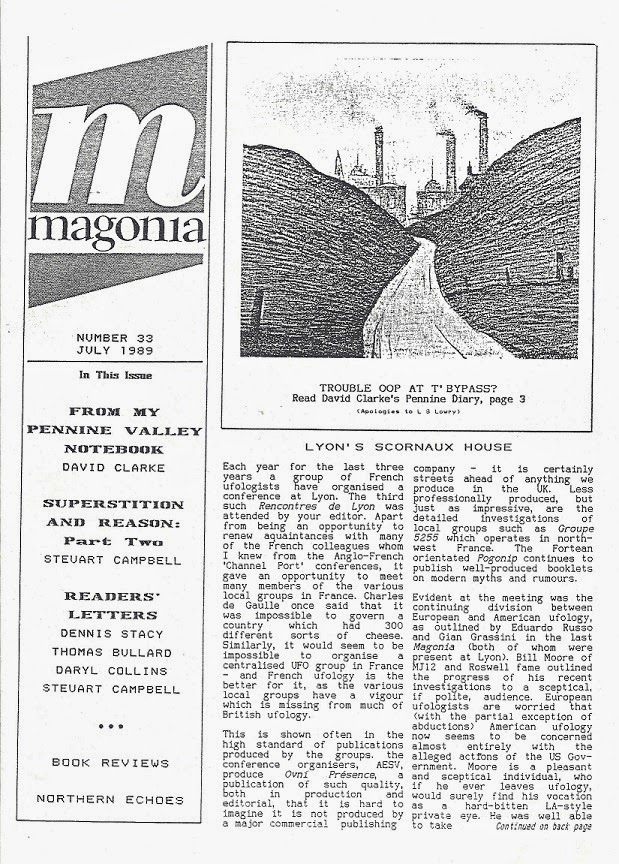 Arch-skeptic Steuart Campbell was not going to let Ralph Noyes defence of superstition in the previous Magonia go unchallenged and here he presents a vigorous riposte. A critical reading of the article may lead one to suspect that he defines 'superstition' as 'things that Steuart Campbell does not agree with', but others may have a different opinion. Read the article here and see what you think.

Campbell makes a re-appearance in the Readers' Letters pages, in which he presents another vigorous riposte, this time to those, including your editor, who felt that his own one-explanation-covers-all solution to the UFO mystery - namely  that they are mirages of virtually anything, under virtually any circumstances - itself might be considered a sceptical superstition.

Much of this issue was taken up with letters from our readers, including such ufological luminaries as Dennis Stacy, erstwhile editor of MUFON UFO Journal who was eased out of the post for being a little too rational, although ironically this particular letter praised the journal's rationalist credentials; and Thomas Bullard, challenging Hilary Evans's conclusions in his review of Phil Klass's book UFOs A Dangerous Game, concluding cautiously “The objective reality of abductions is by no means assured, but neither is their subjectivity a foregone conclusion. This phenomenon dererves better than a vague gesture in the direction of psychology, followed by a premature call of 'game over'.

Indeed it did, and in the years to come Magonia, amongst others, gave the phenomena the consideration it deserved, but still came to the conclusion 'game over'. -- John Rimmer

Very interesting account, and article. Recalls some of Keel's experiences across the Ohio River from Point Pleasant, in and near Gallipolis, Cheshire, Ohio (how about THAT name!), and places even more rural than those. What is it with reports of hooded figures? The British policemen sound like no-bullshit, stable individuals. The high-tension pylons--as ever--might play a part...hard to say. Really enjoyed the read, though!