Most students of alchemy, even those that read the mineral texts, will ultimately pursue the path of spiritual or ‘soul’ alchemy through meditation and breathing and suchlike. Some brave alchemists will seek to help the spiritual process by taking alchemical draughts and will buy distillation equipment and venture into spagyrics or plant alchemy (for example HERE) to prepare tinctures and plant ‘stones’ from herbs with a planetary or medicinal reputation.
🔻
Only the very few (maybe only a couple of thousand worldwide) will make the step into mineral alchemy. And that is what this book is about: not philosophy, nor metaphysics, nor even plant extracts. It asks us to look, in a very practical way, at the physical chemistry of the alchemists through the ages.

The authors of this book candidly tell us they are not experts on alchemy nor historians and they have relied heavily on already published material, and that their choice of (some Arabic but mostly European) alchemists to fit within their fairly random chronology was influenced a lot by the exoticness of their lives and stories.

But the authors also announce that they are, instead, all chemists and - while telling the story of alchemy through its main characters - that the main purpose of the book lies in the twenty Demonstrations or experiments, interspersed throughout the book, based on work actually done by these alchemists. For this book, they say, may be aimed at people who have learned a bit of chemistry at school and might be feeling the urge to dust off the Erlenmeyer flasks and retorts and repeat some of the easier experiments in the alchemical repertoire.

And, on that well-meaning note, the authors launch into their first chapter: a hearty chapter about safety in the laboratory. Their intention is clear, as is their style. There is a chipper, sleeves-rolled-up breeziness about the writing that reminds one of the annual televised Royal Institution Christmas Lectures, full of whizz-bang experimentation and good-natured audience involvement.

But it would be wrong to be put off easily by the sometimes flip and lightweight style because this book has real value. Not so much for the chronological biographies nor for the development of laboratory practices and discoveries over the centuries (William Newman and Lawrence Principe have done it better) but for the intention to make the reader take this history of Alchemy into actual practice and see some of the wonders that simple chemistry, using everyday chemicals and minerals, can bring about. And mostly in the kitchen. 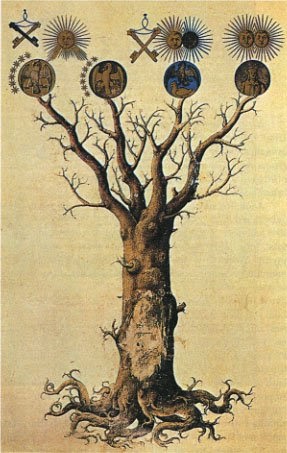 You would need to buy some Pyrex glassware, a few metals and a handful of chemistry-set chemicals and then, with this book, you can tinge silver into gold or make a new golden metal that might fool a careless assayer or you can make artificial emeralds and pearls! Just as miraculously, you can watch a ‘Tree of Diana’ flourish before your very eyes or you can grow a Philosophical Garden inside a flask in a demonstration that was discovered by Glauber in the 1650s. Unfortunately it is not the Philosophical Tree, made out of mercury and gold, that grew in Isaac Newton’s flask as he followed the mercury/antimony path but it is every bit as beautiful.

And this, indeed is the value of the book: to show that exploring the mineral world is not dangerous provided you take care.

The authors choose not to include mercury or antimony in any of their experiments, probably because of the volatile and toxic natures of these elements, but they do explore the three major mineral acids (sulphuric, nitric and hydrochloric). The caution might be well-founded because magickal historians will remember that, some decades ago, the occultist Jack Parsons, who was killed in an explosion at this home, is said to have accidentally blown himself up with Mercury Fulminate, a chemical made simply by mixing nitric acid and mercury.

The twenty Demonstrations, together with other pieces of alchemical labwork scattered in the book, eventually become 44 separate chemical experiments. They range from the trivial (making of invisible ink from lemon or onion juice) to the potentially industrial (making of metal alloys) and, on the way, they cross over all the traditional alchemical territory of gold-plating, silver-plating and the making of precious stones.

All the classical metals are there, bar lead and mercury (presumably because of their toxicity) and copper will be tinged silver by zinc and silver will be tinged gold by iron, tin will be made to look like gold and zinc and tin will form beautiful alloys.

But also there are the basic chemicals that have always featured in the recipes from the Alchemical Cookbook: Alum (aluminium sulphate), Saltpetre (potassium/sodium nitrate), Vitriol (Copper/Iron Sulphate), Sal Ammoniac (Ammonium Chloride), Common Salt (Sodium Chloride), Baking Soda (Sodium Bicarbonate), Lime (Calcium Hydroxide) and Vinegar (Acetic Acid). Of that list of chemicals, only Vitriol does not have a traditional kitchen or a culinary function as well as its role in the laboratory.

This reviewer is one of those whose practical use of alchemy has extended only into plant alchemy or spagyrics (though they may, over the years, have acquired small stocks of thing like antimony and mercury). However, now they have a couple of simple experiments in process from this book. The world of mineral experimentation is beginning to open!

And this is surely the destiny of this book even as it announces it itself in its Introduction: it wants to bring people into practical mineral chemistry as a way of exploring the miracles of the world around us and the life we are living but also as a pathway to guide us back to the practices and the mindsets of our esoteric ancestors and forebears. That is praiseworthy.

There is one other particular thing to praise about the book and a couple of things to quibble about - but not to the extent that they should undermine the value of the book in its purpose. The praise goes to the coverage of women alchemists, including Mary the Jewess (who invented the bain-marie), Anna Zieglerin (who died horribly for making fraudulent claims) and Anne of Denmark (who made medicines on an almost industrial scale).

The quibbles come from the easy-going style of the narrative. Paracelsus is a larger-than-life character and idea of a homunculus (a miniature humanlike creature, made in a laboratory) is a sure crowd-pleaser. But it has been questioned for many years if the recipe for a homunculus was, as our authors insist, the product of Paracelsus’ own quill:

"That the sperm of a man be putrefied by itself in a sealed cucurbit for forty days with the highest degree of putrefaction in a horse’s womb, or at least so long that it comes to life and moves itself, and stirs, which is easily observed. After this time, it will look somewhat like a man, but transparent, without a body. If, after this, it be fed wisely with the Arcanum of human blood, and be nourished for up to forty weeks, and be kept in the even heat of the horse’s womb, a living human child grows therefrom, with all its members like another child, which is born of a woman, but much smaller.” (De Natura Rerum)

There is the airy confidence in this book that the sought-after mystical element that figures so largely in alchemical theory: the substance that descends in the air, the ‘aerial saltpetre’, the ‘materia prima’ or, maybe, ‘the water that does not wet the hands’ was simply the element oxygen: the gas that Lavoisier/Priestly/Scheele discovered in the early 1770s. To this end, the authors tell of alchemist after alchemist who came so close to discovering the new element (oxygen) and yet who missed the possibility, blinded perhaps by the theory of phlogiston, first posited in the 1660s.

But, if that were the case, why – 250 years on - are the world’s alchemists still carefully laying out their trays of minerals in the springtime and in the autumn to collect the dew? Because the aerial saltpetre is altogether more nebulous and aethereal than even an invisible gas. The ‘Universal Fire’ which is alchemy’s prima materia is not an element but a primal quintessence (http://www.sacred-texts.com/alc/catena1.htm).

The book is a slightly bumpy read (written, as it is, by three authors) and is educational rather than ground-breaking but it is unique in its mission: no other alchemical book in the marketplace actively encourages one to begin the practice. And that is the point of alchemy that differentiates it from other esoteric paths: yes, there is a magickal metaphysic surrounding it but at the core is the call to do the work, the Great Work – whatever it means to you – and only by doing the work will you find the Philosopher’s Stone.

This book tells you how to do the work of alchemy. -- Caroline Robertson.