THE LIFE OF GEORGE

The Belgian ufologist Marc Hallet, in cooperation with Richard Heiden, has written a book examining the life and works of George Adamski. They have made it freely accessible on the Internet in a number of formats (I found PDF easiest to use), and we are very pleased to be able to make it available via the Magonia blog. Marc introduces the work:
🔻
"I was a teenager in 1968 when I met May and Keith Flitcroft for the first time. May was one of the oldest co-workers of George Adamski (dead then for three years) and with her husband she headed the Belgian UFO group BUFOI. As years passed, I became more and more deeply involved in BUFOI activities, and the day came when May asked me to write a book about Adamski. I accepted. At that time I was still convinced that everything Adamski had said was true. But as I conducted my research in order to write a serious book, my certainties vanished one after another.
"We had many debates about my new discoveries. It was clear that my friends were always trying to find an explanation in order to keep their beliefs intact. This was an understandable attitude because a great part of their lives had been devoted to Adamski and his claims. For me, the situation was different and easier: I was a young man and I had no preconceived thesis or 'hero' to admire or protect. I wanted to stand only on facts. The day came when, looking at a first-generation copy of the Adamski-Rodeffer film under a microscope, I discovered it was incontestable that that film had been faked. It had a positive result in my life because after that I finally left BUFOI and became more and more a UFO skeptic.

"Since 1976, I have published a lot of critical works on ufology and all kinds of beliefs (religious or not). Except for a short text on my personal website [http://www.marc-hallet.be/Bienvenue.htm] and a chapter in the anthology UFO 1947-1997, edited by Hilary Evans and Dennis Stacy for Fortean Times, all my critical works about Adamski had been published in French. In 2013 my friend Richard Heiden (USA) offered me to help me to write - this time in English - an entirely new study about the contactee. Rich did a difficult and marvelous work, not only with the editing of the text (the way I write English requires numerous corrections) but also with many verifications and corrections of details. So here is now our book entitled A Critical Appraisal of George Adamski, the Man Who Spoke to the Space Brothers, freely downloadable here..." 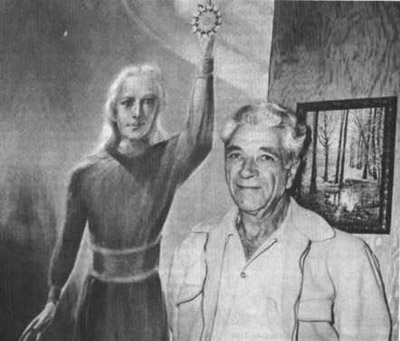 Thanks for posting this review, I would otherwise have missed out on what looks like a first-class review of Adamski. It's been downloaded just over a hundred times in the past couple of weeks and that's quite a healthy rate for archive.org and the subject matter.

Appendix 7 would have caused a small conflict if the author was still with us.

For a more critical appraisal of Marc Hallet's confirmation bias, see the second part of this page: www.the-adamski-case.nl/his-reputation/his-critics/