Just over a year ago I published a list of the ten most read reviews that had been published on Magonia in 2014, so I thought why not start an annual tradition, in the style of that great tabloid columnist, Phil Space. So here we go with 2015’s Top Ten. Once again, those that have been on the blog longer tend to have more hits, but as with last year’s listing, there are one or two big surprises.
🔻

In 10th place is my review of the most recent publication from the heart of the Warminster Vortex: History of a Mystery by Steve Dewey and Kevin Goodman. This was an excellent, workmanlike chronological account of the Warminster phenomenon from the earliest tales of the ‘Thing’ to when interest began to fade at the end of the 1970s. The review also gave me a chance to plug Dewey and Goodman’s other Warminster titles.

Nigel Watson’s UFOs of the First World War: Phantom Airships, Balloons, Aircraft and Other Mysterious Aerial Phenomena is Number 9 on the list, an important book which makes a very worthwhile historical contribution to the plethora of WWI books and memorabilia produced over the last year.

At Number 8 Peter Rogerson takes apart Alex Tsakiris’s anti-sceptic compilation Why Science is Wrong About Almost Everything. He compares podcaster Tsakiris to a radio ‘shock-jock’ who only invites people onto his show who disagree with him so that he can ‘sandbag’ them in order to ‘grandstand to the audience’. Not surprisingly this review generated some heat in the comments which it attracted.

We went ‘Into the Graveyard’ for Number 7 when Lynn Picknett reviewed two books by Chris Woodyard which took an unnerving look at Victorian attitudes to death. The Ghost Wore Black, Ghastly Tales from the Past was, she said, “a delight on many levels”. The Victorian Book of the Dead, which examined the era’s obsession with morbidity and the paraphernalia of death she found grimmer going, was an excellent job of research, but “definitely not for the faint hearted!”

Although posted in the last month of the year Number 6 in our annual chart is Peter Rogerson’s review of Geraldine Sutton Stith’s account of her family’s extraordinary experiences in the famous Kelly-Hopkinsville ‘goblins’ case from 1955. Although Geraldine’s account brings us no closer to an explanation for these mysterious it does give interesting background to the family and the community where these events took place.

There is a great deal of social background in the Number 5 title, How UFOs Conquered the World, by honorary Magonian David Clarke. Rather than a history of UFOs this is a history of ufology, which many of us at Magonia decided a long time ago was a much more interesting phenomenon than the old flying saucers. An entertaining and illumination look at a very strange phenomenon, and some very strange people (present company definitely not excepted!).

At Number 4 Clive Prince reviews a biography of William Lilly, whom he describes as one of the Enlightenment’s “wonderfully cool characters” Lilly’s life as a magician, astrologer, political agent and polemicist, historian and natural philosopher leads to a biography that is sometimes “hard going for the non-specialist” but as a whole is of value to anyone interested in the Enlightenment and English history of the 17th century.

A large encyclopedia of the paranormal takes the Number 3 position in our list. The Paranormal From Alchemy to Zombies. According to Peter Rogerson, presents a classic example of compiling an encyclopedia on a field of interest which lacks any clear boundaries or any consensus on what topics should or should not be in it. He concludes that it takes too broad-brush an approach, and is hampered by the lack of a clear editorial direction. 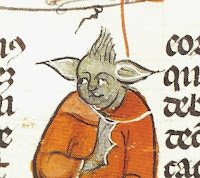 A delightful little book comprising almost entirely of pictures is the surprise Number 2 entry. The Monsters of the British Library are not going to crop up in any ‘serious’ cryptozoology monograph; they are the creatures which haunt the margins of the illuminated manuscripts in the Library’s collection. Terrifying, humorous or just plain weird, I found these monsters to be a delightful collection which together gave some sort of insight into the medieval mind.

As I said at the beginning, compiling this list throws up some surprises, and Number 1 is certainly remarkable. Despite being published just three weeks ago, the out and out winner is Peter’s review of Spirits of an Industrial Age: Ghost Impersonation, Spring-Heeled Jack and Victorian Society, privately published by the author Stephen Middleton. We all know about Springheel Jack, but this fascinating book introduces us to Jack’s many impersonators throughout the nineteenth century. It would seem that dressing up as a ghost and scaring the bejazus out of innocent passers-by (especially housemaids) was the major source of amusement amongst the youth of the era. I suppose as there was no X-Factor they had to do something.

Well, there you are, the Magonian top-ten. I’m not sure it tells us very much about anything, except possibly just how varied and esoteric are the literary tastes of Magonian readers. -- John Rimmer