GROPING IN THE DARK


This book provides a fascinating insight into a lost world, the post-apocalyptic 1920s, a decade in which the world was crawling back from the twin catastrophes of the Great War and the nightmarish influenza epidemic, Between them these two nightmares had taken at least 100,000,000 lives, and left families shattered.
🔻
In their wake large numbers of people turned to spiritualism, championed most notably in this period by Sir Arthur Conan Doyle, the creator of Sherlock Holmes. Doyle’s eldest son, Kingsley had more or less survived the war, only to be struck down by the influenza in its last weeks.

In this fevered time mediums (or is that media), proclaimed new revelations, which ranged all the way from very homely visions of the afterlife, as more or less a heavenly Welwyn Garden City in the ether, to grand apocalyptic visions of a new saviour, albeit one concocted by a mixture of adultery and spiritual eugenics. For those for whom the messages were not especially convincing there were more physical manifestations, most notably ectoplasm, which had the habit of oozing out of women’s more intimate areas.

Of those who were simultaneously attracted and repulsed by all of this, perhaps the most notable was the magician and escape artist Ehrich Weiss, alias Harry Houdini. Harry’s involvement in spiritualist grew out of his desire to contact his deceased mother, to whom he was besotted. Indeed he could have been the person for whom Freud coined the term Oedipus complex. When his 'sainted mama' failed to manifest Harry became a militant sceptic, and spent an increasing amount of time showing how he could duplicate medium’s feats.

It was a time of prizes, and so it came to pass that the popular science magazine Scientific American created a prize for anyone who could demonstrate real psychic abilities. A panel was convened, of which Houdini was a member, and various psychics were tested and none passed.

Then they came upon the witch of the title; Mina Stinson Crandon, the much younger third wife of Le Roi Goddard Crandon, surgeon and, it appears, closet abortionist. The Goddards and the Crandons were part of the Boston Brahmin elite. Mina began to develop mediumistic powers, and the Scientific American panel began to investigate her, using the pseudonym 'Margery'.

Mina/Margery was helped in this by one obvious fact, all of the panel were men and she proceeded to seduce most of them emotionally and in some cases, such as Hereward Carrington, physically. The prudish Houdini was the one most impervious to her charms. She certainly charmed Malcolm Bird, the chairman of the committee, but it is doubtful she let him touch her, at least not after he came to one of her séances with a prostitute in tow, who sat on his knee and pissed on him. Not the sort of company Boston Brahmins were used to! 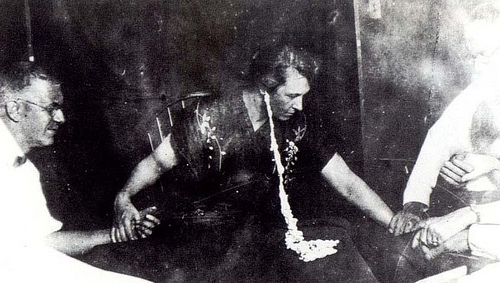 Another she almost seduced was Eric Dingwall, the research officer of the SPR, who testified to her genuine powers, at least while she was allowing him to feel her up, once back in England his support for her rapidly faded.


If rumour was to believed Crandon was a lot more sinister, the Crandon’s had a habit of adopting boys and then sending them away, only no-one ever seemed to be able to follow their trail back. Some people hinted he was involved in child trafficking, forwarding them on for illegal adoptions, perhaps he was a pedophile, and there were those who hinted he was far worse than that, that he used the boys in hideous medical experiments of the sort that became notorious under Dr Mengele,

It is hard no know what the truth was, perhaps it is significant that his stepson from Mina’s first marriage, who also became a doctor, subjected himself to medical experiments involving cutting and giving himself scurvy and was described as “chronically anxious and unhappy”. He defended his stepfather but hinted “there’s a bit of a psychopath”. It is hard not to see John Crandon’s experiments as a form of self-harm, but perhaps also an atonement for something too dark to name.

In a sense the story of Mina Crandon, lurching between farce and tragedy is reflexive of its age, as is the spiritualist saga. The time of the rise of radio, of aircraft, hints of television round the corner, a seeming age in which anything could happen. When it did it was Auschwitz and Hiroshima and bringing back the dead had lost its attractions. -- Peter Rogerson.