Shire Chess and Eric Newsom. Folklore, Horror Stories, and the Slender Man. The Development of an Internet Mythology. Palgrave, 2016.


Something happened in Waukesha, Wisconsin, on 31st May 2014. That something was the attempted sacrifice of a human being. The incident involved three 12 year-old girls. According to reports in the media, two of the girls enticed the third into local woodland. The two then stabbed the third nineteen times and left her for dead.
🔻
This was done partly in order to ingratiate themselves with the character known as the Slender Man (also known as Slenderman) and also to save their own families from being harmed by him.

However, the Slender Man was not only fictional, but his entire creation and subsequent history could be viewed on the internet. Very much a creature of our times, he originated on the Something Awful online forum, on 10th June 2009. The Slender Man is not just slender, he is abnormally tall and thin. Virtually faceless, he wears a black suit and tie with a white shirt, sometimes has tentacles that appear to come from his back and towers over those around him. The towering is all the easier as he is typically seen in the company of children, whom he seems to prey upon. Unlike the vampire or werewolf, his birth is traced to one particular date and he has evolved from the efforts of many internet users as they have added to his myth.

After this creation appeared online, other people saw this and, with the creator’s blessing, added to the story using prose, photoshopped pictures and video plus audio files as well. Therefore we have a fictional internet form whose conception and progress we can follow yet has gathered enough power to, apparently, create a real threat and communicate power, at least to children who are almost teenagers.

The book itself is published by Palgrave Macmillan, an academic publisher. The authors are, as one would expect, academics themselves. This, then, is an intellectual approach to the Slender Man phenomenon, apparently written and released roughly six months after the attempted murder. It is, appropriately enough, a slender tome, though there is plenty of ground covered. As one would expect from a work of this nature, there are notes, a large bibliography and an index. Under each chapter heading are two useful sections; an abstract summarising the forthcoming chapter contents and a keywords section, presumably for those accessing the e-reader version of the book. 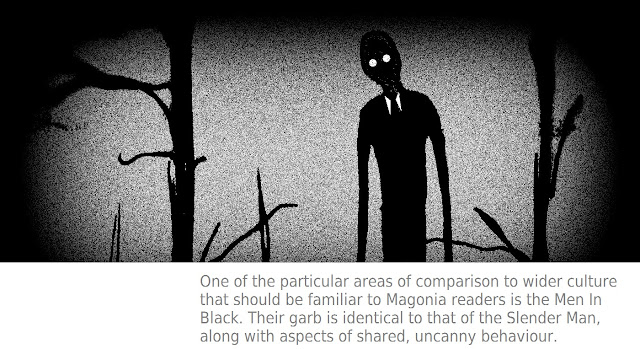 As has been mentioned, this is an academic tome. The writing reflects this. Therefore, it is not the easiest work to read. There appear to be two main themes; the nature of stories and their development, both in a technical multimedia age and how this parallels myth-making in the distant past, and the specific development of the created Slender Man. The authors have used the example of the Slender Man to demonstrate the evolution of folklore, comparing some websites to ancient storytelling venues. Indeed, there is a chapter entitled The Digital Campfire. Just how stories and folktales develop is looked at in great detail, at times passing over some of the narrative of the Slender Man himself.

One of the most intriguing aspects covered is how much similarity the Slender Man himself has to those other troublers of children, the fairies. They are both liminal figures, their appearances shift and their reality is questionable. One of the particular areas of comparison to wider culture that should be familiar to Magonia readers is the Men In Black. Their garb is identical to that of the Slender Man, along with aspects of shared, uncanny behaviour. This example also demonstrates the constantly evolving nature of this phenomenon. Another fascinating concept is that of the tulpa. The thought-form created purely by the power of the mind is a familiar concept in Buddhism and, according to the authors, is true of the Slender Man, albeit in what they call a figurative sense. One of the key points is that the elaboration of the original character is virtually all done by enthusiastic amateurs. Any large-scale commercial work has not been apparent so far, so creativity has its head and the Slender Man lives in the wires and waves of the internet.

This work covers much of the Slender Man, his birth and subsequent life online. It also looks hard at how modern tales are written, and the similarity with how tales were told and evolved in our past. This is a work by scholars, and may not be for the casual inquirer into the development of internet memes or, indeed, the Slender Man story itself. Having said that, it is a worthy coverage of just how the internet is being used by us to enable the numinous corners of our consciousness. -- Trevor Pyne.