UP THE AIRY MOUNTAIN DOWN THE RUSHY GLEN


These two titles are rather lighter ventures into the world of the strange and unexplained than we usually deal with here at Magonia, but no less worthwhile for that. Bob Curran will be know to Magonia Review readers for titles like American Vampires and Inside the Dark, Twisted World of H.P. Lovecraft. With Leprechauns he lets his hair down a bit with an amusing ramble through the world of little folk in Ireland and a few adjacent territories.
🔻
We all know what a leprechaun is like, right? Big green hat, green jerkin, green breeches and probably a glass or three of something warming. Well that seems to be what it’s like at the Six Nations rugby anyway!

The little folk in Bob Curran’s book, however are a much more varied crew, and have many different names and characteristics depending on which part of Ireland they come from. There is a sort of proto-leprechaun called a ‘grogoch’, who haunts the glens of Antrim. He is a particularly unkempt creature who lives in ruins and hedgerows, and children would be scolded by their parents for ‘looking like a grogoch’ when they came back from playing out, with their clothes covered in mud and their hair full of bits of hay and straw. 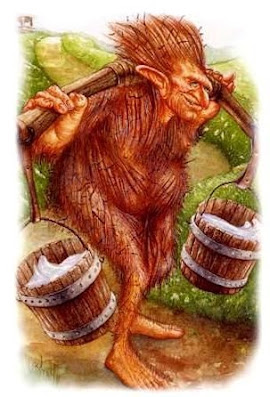 Despite their appearance they seemed to be hard-working little creatures who would help with the harvest, washing potatoes, and performing other useful tasks around the farm. Unfortunately, they were also rather annoying, as being so hard-working themselves they took a dim view of anyone they thought wasn’t pulling their weight. One tale from Rathlin Island off the north coast of County Antrim tells of a busy grogoch who resented the elderly farmer he helped having a little lie-in on Sunday mornings:
“When old John was lying snoring in the bed, he would hoist himself up onto the covers and creep up. Then he would batter the old man about the face until he got up and did a bit of work before going to Mass”.

It’s not surprising that Curran concludes, “unlike the standard leprechaun the grogoch was widely thought to be extremely stupid”.

Another name for leprechauns in Ulster is pecht, and Curran suggests that this indicates a connection with the word ‘Pict’, perhaps implying that they have some connection with a ‘race memory’ of small-statured Pictish settlers from Scotland, who moved to Ireland in prehistoric times. This idea was popular amongst folklorist in the early part of the last century, but now seems to have been discredited. A more likely explanation is that the leprechaun forms part of a common folk mythology which spanned northern Ireland and south eastern parts of Scotland. The later Norse invaders may also have added elements of their stories and mythologies to the folklore mix.

The author is not afraid to raise the question of Sex and the Single Leprechaun. We are led to believe that leprechauns are all male, which does lead to a rather basic question: where do little leprechauns come from, or indeed are there any little leprechauns at all? They seem to be very reluctant to talk about their sex lives, which may be because due to their appearance and habits, they have little or none. Some legends claim that they are the result of an unholy alliance between a human male and a female fairy, or sidhe. The grogoch may be involved somewhere here as well. Although the Irish grogochs maintain the all-male characteristics of the leprechaun, their Scottish counterparts are both male and female, so deep in the Celtic mists were there surreptitious crossings between the two countries, perhaps by means of the Giant’s Causeway?

There are many other puzzles of the little folk which are discussed in this volume. How old are they? Some seem to be able to remember Cromwell’s depredations in Ireland, others tell of the coming of the Norsemen, some even tell tales of pre-Celtic times. What is their religion? Although forbidden to enter sacred places by the Church, some seem keen to take Mass or be christened, other treat sacred services with disrespect, cannot abide the presence of an ordained clergyman, or attempt to prevent humans from attending church.

Although Bob Curran presents many fine old tales of Irish country-folk meeting the little individuals, these are largely from a time well before camera-phones, so it would be unfair to demand physical evidence, as we do with tales of UFOs or Bigfoot. But of course the physical evidence for those two intruders from the nebulous realms of Magonia is scarcely any better than our evidence for leprechauns (A title sadly missing from the ‘Evidence for...’ series of ASSAP paperbacks in the 1980s). I have heard one first-hand sighting of a leprechaun by a prominent paranormal researcher and writer, and we have the first hand evidence of numerous Liverpool schoolkids in 1964, who unfortunately are not represented in this collection.

Although giving us no deep new insights into the nature of the supernatural world, this is a very entertaining compilation, and would make a fine gift for St Patrick’s Day (oops, too late for this year) or anyone with a love of all things Irish.

Leprechauns turn up again in Varla Ventura’s book, which surveys a wider range of liminal creatures to be found in the shadowy parts of the deep woods. Like her previous little books on mermaids, and banshees and other ghostly creatures, it is largely an anthology of pieces from collections of folklore, and literary sources, including works by William Butler Yeats, Charles Perrault and Douglas Hyde. A nice introduction to the literary folk-tale, with a useful ‘further reading’ section.

A chapter in Ventura’s book deals with the pooka or púca, an animal spirit which attaches to an individual as a trickster figure, sometimes friendly, sometimes mischievous. This is headed with a quotation from James Stewart’s character Elwood P. Dowd in the film Harvey where he was accompanied by a pooka in the form of a giant rabbit: “Well I’ve wrestled with reality for 35 years, doctor, and I’m happy to state I eventually won out over it”. A fine motto for any true Magonian.