Jon Karl Helgason. Echoes Of Valhalla; The Afterlife of the Eddas and Sagas. Reaktion Books 2017.

The Snorra Edda is one of the oldest manuscripts we have that recounts the medieval Icelandic sagas. Dating from 1220 it was compiled and partly written by Snorri Sturluson. Three years ago I was in Reykjavik hoping to view the Snorra Edda and other manuscripts at the National Library of Iceland.
🔻
Unfortunately the building was being renovated and the works had been removed to the University, which meant that unless I was a visiting scholar it would prove difficult for me to see them. At least I can now hold the book Echoes of Valhalla in my hand and look at some enticing photographs of pages from the sagas. Snorri Sturluson, with others, was one of the “re-writers of older pre-texts”. Jon Karl Helgason qualifies this claim by stating “But that does not rule out the possibility that their works were driven by the same compelling need for self-expression that shape compositions which are more original.”

Echoes of Valhalla contains a fascinating two page Timeline from 870 to 2015 showing key dates in the establishment of Iceland, its early legends in poetry and prose, and the international influence of the Viking myths and sagas as realised in novels, plays, films, music, theatre opera and even heavy metal. Yet here arises a problem, for this book, that isn’t overcome. Although we have a long list of works of art (separate from Icelandic literature) very few have proved to be really substantial works of art that authentically echo those ancient tales.

For me Wagner, Carl Nielsen, Ibsen (in part), Tolkien (in much lesser part) and novelist Halldor Laxness seriously arrive at their profound Valhallas. Whereas the perfectly enjoyable Hollywood Viking films of The Vikings, The Long Ships, Erik the Viking and numerous heavy metal bands never even ascend to the uplifting home of the Gods. I appreciate that I haven’t experienced all the art of Helgason’s timeline and my preference appears to be more for high culture over popular culture, but for me the influence of the sagas works most effectively when pastiche and kitsch are skated round and/or avoided entirely. At best even this can prove to be an uneasy adaptation - turgid drama in the form of Ibsen’s early play The Warrior/Vikings at Helgeland (I know it thematically looks forward to Hedda Gabler but that doesn’t save this tedious play.)

Too many of Helgason’s examples simply allow him to retell stories, plotting and characters with their suggested connections and ideas. But does that necessarily mean the new creations are that culturally important? I might enjoy the comic book hero Thor on a engaging level of childish fantasy yet cannot take him seriously as an involving archetype of struggle and transformation: whereas Wagner’s Wotan, of the Icelandic text influenced Ring cycle, does the trick every time with some amazing transcendental music. 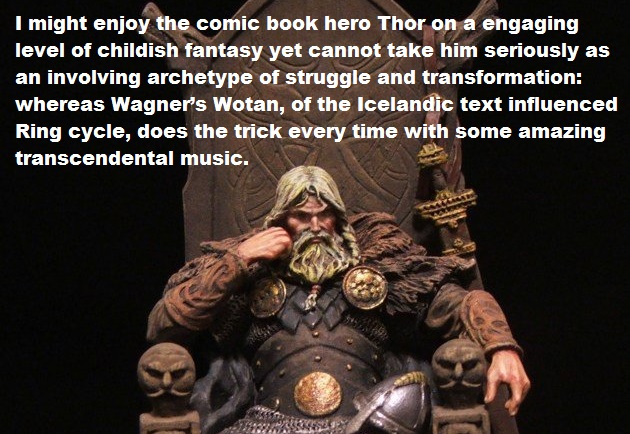 The prologue has an arresting quote from Fredric Jameson’s essay, Post-Modernism and Consumer Society:

“Cultural production has been driven back inside the mind, within the monadic subject: it can no longer look directly out of its eyes at the real world for the referent but must, as in Plato’s cave, trace its mental images of the world on its confining walls. If there is any realism left here, it is a ‘realism’ which springs from the shock of grasping that confinement and of realizing that, for whatever peculiar reasons, we seem condemned to seek the historical past through our own pop images and stereotypes about that past, which itself remains forever out of reach.”

For Helgason this doesn’t mean that the works he will discuss in Echoes of Valhalla are “any less interesting or important.” Not less interesting, perhaps. But important? The pitfall for any modern re-working of the Sagas is the negative consequence of pastiche. And the more ancient the story that’s re-told the more unable we are to accurately reproduce its mind-set in art. In the original Sagas that I’ve read there is a dark inner sense of brute force and foreboding. In too many modern adaptations and borrowings this has been softened to create a heroic here and now of facile Viking adventurism.

Helgason can get bogged down (forgive the Icelandic pun) in too much paraphrased material. The arguments of his book need to be longer and more analytically explored. Less subjects with more substance. But to be fair to the author there are some very interesting parts touching on areas for further research. The chapters on travellers to Iceland, Ibsen’s play The Warriors/Vikings at Helgeland, Richard Wagner’s music and Snorri Sturluson are reason enough for acquiring this book.

Helgason writes in a relaxed and intelligent manner. He’s an enthusiastic academic. My big contention is the book’s subject matter in itself . Does it stand up to be written about in depth when a lot of the time, with major exceptions, the richness of the textual source, the sagas, has often been so culturally diluted? It’s not just a case of loosely imitating Valhalla but authentically projecting an idea that we are so very far away from in time. Echoes of Valhalla is one of the very first books to take as its subject the Icelandic sagas and their cultural successors. And for that fact alone must be welcomed. – Alan Price.