Some may be shocked, others bemused, to discover that Amazon sells High John the Conqueror Anointing Oil. This, as the more esoteric of you no doubt know, is a staple accoutrement of traditional Afro-American Hoodoo. And clearly, as such an arcane thing is available on Amazon, Hoodoo has got at least one toe in the mainstream pool.
🔻
Whether or not that’s desirable depends, of course, on one’s view on what some venerate as a religious aspect of black folklore, others decry as blatant charlatanism and superstition – and some believe to be nothing less than black magic. But it is much more than any of those.

As Tony Kail’s detailed and restrained book reveals, the history of Hoodoo in the US – specifically in its heartland, around Memphis, Tennessee – is pretty much also the history of black survival in certain areas of north America and as such possesses a remarkable significance, without even scratching the surface of the actual religious aspects. Hoodoo is important, not only in its own right, but also as a marker of the tenacity of African Traditional Religions (ATRs).

But first, Hoodoo is not Voodoo. Geographically, Voodooism was and is centred on Louisiana and has its roots, not only as expected in African tribal beliefs but also eclectically in Catholicism, with a Cajun undertone. Certainly to an outsider – and therefore craving indulgence from true adherents of the religion – Voodoo is heavily based on a belief in spells and spiritual possession. In any case, it is all too often viewed with alarm and disgust by an outside world that is familiar with sensationalist stories of Voodoo as synonymous with devil worship in places such as Haiti. Sadly, however, revisiting Voodoo is not the subject here: Hoodoo is.

Hoodoo has similarities to Voodoo, but differences too. It is primarily a plant, root and herb-based practice that also uses spells, often for healing, and is associated with what might be termed the black Spiritualist movement. The roots of Hoodoo are both literal and figurative. Roots are very, very important to Hoodoo practitioners.

From as early as 1866, newspapers in the American Deep South were reporting about the deviant, ‘barbaric’ practices of Hoodoo ‘rootworkers’. These, needless to say, were viewed as a threat to the white overlords. Soon public panics arose, and ancient beliefs became a laughing stock. One police officer stopped and frisked a rootworker. Finding a bag containing a charm, the officer said: ‘A grown man, even if he was a negro, ought to have better sense than to believe in such stuff.’ He threw the charm onto a stove. The rootworker was horrified, claiming it was his only defence against enemies. The story went the rounds. To the white population it showed how stupid black people could be. To adherents of Hoodoo it showed how crass white people, especially the authorities - could be. And usually were.

One knee-jerk reaction to this might be that, despite his inflammatory and bigoted approach, the policeman might have a point. Surely, some might think, any sensible adult wouldn’t believe in such stuff. That is the big question, of course, vis-à-vis any religion: do their prayers, incantations and sacraments in any tangible sense, actually work?

(The answer is probably: yes and no, and it depends. But that’s not the point here.)

The Secret History of Memphis Hoodoo is first and foremost a respectful socio-historical presentation of Hoodoo, not essentially a critique. You will learn a huge amount about an intense – even perhaps a somewhat claustrophobic culture – but your scepticism is irrelevant.

As a valid ATR, Hoodoo’s charm bags, roots, potions and so on are sacred – just as much as a crucifix might be to a Catholic. Perhaps more so, given that Hoodoo represents in so many minds a whole way of life that is synonymous with surviving the grim years of enslavement.

One of the major points of interest is the revelation of how local, even parochial, American Hoodoo was and is. After all, the book’s title makes it plain it’s about Memphis, and much of the content even discusses specific drug stores and ‘curio’ emporia in specific streets. It’s that local, and that intense.

The streets of Memphis have historically bristled with shops, some of them famous, selling the stuff of Hoodoo, from the inevitably love potions – though the ‘come to me’ candles and lotions sit side by side with those intended to split couples up or banish an unworthy suitor – to the paraphenalia of money- and luck-attracting spells (always a favourite among gamblers), and those for healing or cursing. 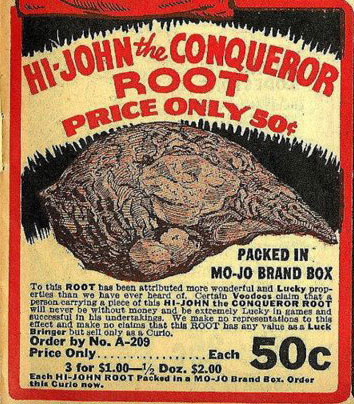 As mentioned earlier, one of the most famous names associated with Hoodoo ritual is High John the Conqueror, a legendary figure, ‘said to be a son of an African king and had been sold into slavery. John the Conqueror was said to bring about laughter and hope to African slaves. He would even bring laughter to the faces of slave owners…’ He is both a sort of invisible superhero and an actual root, or a group of herbs. The root can be carried, or chewed or placed in that Hoodoo essential – the mojo (personalised charm) bag.

When plain ‘John the Conqueror’ is ‘dressed’ with Heart’s cologne (perfumes and oils are also staples of the ritual practices) it becomes ‘High John the Conqueror, King of the World’. Researchers have discovered that High John was carried by slaves to avoid beatings from plantation owners. One can only hope it worked.

Like Voodoo, Hoodoo adherents use elements of the Bible in their practices. For example, Psalm 6:6-9: ‘… I water my couch with my tears. Mine eye is consumed because of grief… Depart from me, all ye workers of iniquity; for the Lord hath heard the voice of my weeping. The Lord hath heard my supplication; the Lord will receive my prayer’ is used together with spells for healing eye troubles.

For almost all its presence in Memphis, Hoodoo rootworking, conjuring and healing had to be practised clandestinely.

Historically, few practitioners were keen to talk about their work to outsiders and it is only in the modern era that academics have been able to interview them – or, indeed specialise in a subject that for so long was deemed unworthy of scholastic interest. Pioneers in the early 20th century opened up the field, with the work of the likes of folklorist Newbill Niles Puckett, whose book Folk Beliefs of the Southern Negro is a classic.

One of the most remarkable revelations – and the most colourful – is the discussion of famous practitioners. One of the most revered is known simply as ‘Doctor Jack’, a slave (born in the late 18th century) whose astonishing results as a healer earned him the freedom to roam and practice his ‘medicine’ throughout the southern states. Soon, however, complaints were filed against him in the courts, which led to a group of 67 influential white women petitioning the state to repeal the act that prevented him practising legally. Their petition stated that they ‘believe “Doctor Jack” to be honest, honorable and skillful, especially in obstinate cases of long standing; and that the people ought not to be denied the privilege of commanding his services.' This was accompanied by several other testimonies.

One, from a slave owner, said that one of his male slaves appeared to have been dying but after being treated by Doctor Jack with ‘indigenous roots’ he ‘made a perfect cure’. Grimly, however, this ends: ‘The negro is now well and fit for the hardest service given under my hand.’

Many Hoodoo practitioners have been arrested for fortune-telling, which was often the result of police ignorance or bigotry. Hoodoo does incorporate ‘spiritual readings’ and prophecy. Sometimes, as this excellent and objective book makes clear, however, the authorities were quite right in taking decisive steps against some ‘rootworkers’, who turned out to be blatant charlatans. ‘Conjuring cons’ have been all too frequent.

Memphis was also home to many historically important Spiritualist organisations – such as the Reverend Samuel Watson’s Southern Association of Spiritualists. In its day, this was quite a step, as the earliest Spiritualists – c. 1840s – were none too keen to involve the black community. But in 1855 Watson formed a group, including five physicians, the Episcopal Bishop of Tennessee and laymen from several churches to investigate the apparent psychic talents of a young black girl who seemed to be able to channel spirits of the dead. After she impressed the investigators favourably, Spiritualism blossomed among the Hoodoo-based community. It was particularly beneficial to black women, who soon rose to prominence in many of the new Spiritualist churches, assuming names such as ‘Queen’ or ‘reverend’. Some congregations chose to call themselves ‘spiritual churches’ rather than evoke the Spiritualism of the white people (or the Spiritism of South America). The Spiritual Churches often focus, not just on contacting the dead, but also on healing the living. The spirit of Doctor Jack lives on.

This book is even-handed, non-judgemental and unsensational, but not without a sort of gentle implicit affection for its subject. And somehow, while not being literary in the slightest, its pages still manage to convey the reader to the hot, stifling streets of Memphis with its Hoodoo curio shops and stores pungent with High John the Conqueror floor washes and colognes.

To a white European, it might seem bizarre that a religion can encompass everything from perfume to spells to healing, but then what would, say, the practices of Catholicism seem like to an outsider?

And if the amorality and practice of casting spells appears intimidating and distasteful, it might do to recall exactly where Hoodoo came from – the roots of its roots, if you like.

At a lecture given by a Hoodoo priestess in London a few years ago which I attended, a Wiccan (modern witch) in the audience asked if she wasn’t worried about her spells rebounding on her. He explained that Wicca teaches that whatever you put out magically comes back threefold, so if you curse someone you will basically get hammered thrice over.

‘Well,’ replied the Hoodoo lady with feeling, ‘We don’t have that in our tradition. After all, what could possibly be worse than being a slave?’