The Land of the Rising Sun, with its great natural  beauty and sophisticated culture, has many shadows. While every culture, as a reflection of human nature has its dark side, Japan's is more complex and multi-layered than any other I know. It is full of surprises and enigmas that continue to unravel as you go deeper.
🔻
The Dark Side of Japan is a book that does exactly what it says on the cover. It unveils some of the darkest aspects of the Japanese psyche to be found in ancient beliefs, legends, superstitions and black magic.

Antony Cummins sets the scene unequivocally in his Introduction: Welcome to Hell.  He presents the Japanese as "a people of esoteric teachings, some aficionados of ancient ceremonies, others masters of warfare, clad in their strange armour and steeped in bloodthirsty ways".  That, at least, was the popular Victorian image. His view of modern Japan is that while it is "still a cultural goldmine, it has been stripped by tourism and trade with the West and is starting to look played out". This does seem to be overly pessimistic. Could we not say the same thing about any modern industrialised nation? 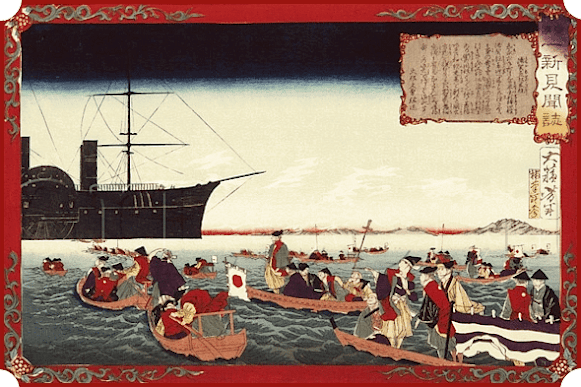 Unique among modern nations, Japan remained isolated from the rest of the world during the Industrial Revolution. It was only in 1853 that Japan was forced to open to the West by an armed American fleet. They certainly made up for lost time, becoming an advanced industrialised nation in only a few decades. As a sign of how quickly the Japanese emerged onto the world stage, by the beginning of the 20th century they wanted to be recognised as equal with the Western powers. In 1904 they took on the mighty Russian Empire in a territorial dispute over Korea and Manchuria.  By 1905 Japan and its navy had won a complete victory over the Russians, much to the surprise of world observers.

It is Japan's long isolation from the rest of the world that makes its culture so distinct. Cummins observes that "it was only a few generations ago that its medieval period faded from living memory.  The strong echo of that time has only begun to die in the last few decades, and before it falls silent it is our task to capture it".

The author is particularly interested in Samurai culture and martial arts, especially those of the Ninja.  It is for this that he is best known, with several published books to his credit and a YouTube channel where he discusses and demonstrates various aspects of Japanese martial culture. Interestingly, a Google search of his name provides a top entry, from a website called way-of-the.samurai.com, that claims he is a fraud, evidently from someone who has an axe to grind. While Cummins is acknowledged as having academic degrees in Ancient History and Archaeology, he is attacked for not being able to speak or read Japanese and of putting his own interpretation on translations of ancient texts. On the same critical Blog page is a lengthy entry in his defence, pointing out that he is not a fraud because he has never claimed to be able to read Japanese.

The idea for writing this book came to Cummins while reading some of the Japanese folklore and ghost stories collected by Lafcadio Hearn (1850-1904). Hearn was of mixed Irish and Greek parentage, and in the latter part of his troubled and eventful life settled in Japan.  He fell in love with the country and married the daughter of a Samurai family and had four children with her.  In 1896 he became a naturalised Japanese citizen assuming the name Koizumi Yakumo and converted from Christianity to Buddhism. His work has historical value because he provided the West with some of its first accessible descriptions of pre-industrial Japan. At the beginning of the 20th century Japanese art, style and culture became extremely popular and gained an exotic image, which to some extent persists to this day.

Inspired by Hearn's supernatural stories, Cummins set off on a library hunt for more material, and found much of the information for this book in the John Rylands Library in Manchester. Some of the material comes from ancient Japanese text, ably translated by Yoshie Minami and Mieko Koizumi who have worked with Cummins on his previous books. As a team they clearly work well together, and Cummins admits that their part in the work takes considerably longer than his.

Most Japanese people are flexible and pragmatic in matters of religion. Chapter 2 'The Dead and Human Sacrifice' begins with this explanation: "The afterlife in Japan is based on a mixture of religions including native Shinto and Buddhism." One thing to bear in mind regarding the Japanese mentality is that they see the divine spirit or kami (a word that can mean 'god') in almost everything, particularly in Nature. Most homes have a family altar where dead relatives are remembered and honoured. Small offerings of tea, water, rice, fruits, sweets, etc. are placed daily on the altar, and the spirit of the deceased take the invisible essence of the nourishment. In this way the dead stay around the family as guardians and protectors, not fading away as in Western tradition.

Chapter 3 'Hags, Vampires, Ghouls and Ghosts' has some fascinating information on types of ghosts.  "The first is shi-ryo, which is the spirit of someone who is dead.  These only haunt at night.  The second is iki-ryo, which is the spirit of a living person. The Japanese believed that if someone was angry enough their spirit, without them knowing it, could leave the body and attack their enemy in broad daylight."  An example of this is Lady Rokujo in the epic tale Genji Monogatari, where she attacks her rivals because of intense jealousy.  This spirit is strong enough to kill, as in this case.

There is a whole catalogue of mythical creatures that were terrifyingly real to villagers and peasants.  Perhaps the most famous of these is the kappa which killed humans in a gruesome way, and could rape women.  If a baby resulted it had to be taken outside and hacked to death. Demons are known in Japanese as oni and devils as akuma. The horned  might, in some cases, cut off  their horns and try to become monks, perhaps seeking redemption. Small ones might do mischief such as tickling monks' heads to disturb their meditation.

Perhaps the most useful information in The Dark Side of Japan is the 'Ancient Black Magic' part.  Here the book becomes a veritable grimoire of spells and talismans for self-protection, punishing or destroying an enemy, safe travel, dispelling a nightmare, recovery from disease, having good luck, a long life, and more. The Chapter on 'Ill Omens and the Chi of Death' is not likely to be of much use unless you are about to go into battle and need to read the meaning of various patterns of smoke emerging from your enemy's castle. If you do go into battle as a samurai and happen to cut off someone's head with a sword you will need the information on how to deal with the head to prevent it from getting its revenge on you.

Death features in one form or another throughout. There is a special place for suicides in Japan, a densely forested area near Mount Fuji known as Aokigahara. In 2003 there were 105 recorded suicides, but in recent years the authorities avoid giving the statistics to deter would-be suicides.  Warning signs are posted at the entrance. Sometimes hikers get lost in the forest, and it is inevitably a place with a grim atmosphere, haunted by disturbed spirits. Some of these came from the cruel practice, that evidently continued into the 19th century, of ubasute, leaving elderly people to die there when their families could no longer care for them.

Japan is, of course, famous for ritual suicide, either for honour or disgrace.  The chapter 'Samurai and their Weapons of Death'  tells you all you need to know, in detail. It is worth mentioning that the popular term hari-kari is a mispronunciation of the correct term hara-kiri, which literally means 'belly-cut'. The more formal Japanese word seppuku, when written in Japanese characters, has exactly the same meaning. One of the last seppuku rituals to take place in Japan was in 1970, when the writer and actor Yukio Mishima performed it in public after a failed military coup.

Mishima himself once said, in an interview conducted in English, that the two outstanding characteristics of the Japanese were elegance and brutality. The latter aspect was certainly in evidence during World War II, no doubt the darkest period in Japan's history, ending in disaster. Nowadays, on the face of it, Japan is a nation of style and elegance, totally committed to peace with Article 9 of its Constitution, enacted in 1947, outlawing war as a means of resolving international disputes. However, it has to be admitted that there are certain elements within the country, under the general category of "nationalists", who would like to see Japan armed with nuclear weapons and militarily independent again. This debate is ongoing within the nation and looks likely to intensify over the coming few years.

On a lighter note, the final chapter 'Superstition in Modern Japan' lists a great many odd and curious superstitions that show the continuing influence of ancient myths. One good example is that you should cover your navel when it thunders, because the god of thunder wants to take it and eat it. This may seem ludicrous, but my Japanese wife confirms that as a child she used to do that.  It obviously gets passed down through the generations.

Another custom, actually a taboo, is that you must never put your chopsticks in an upright position in your bowl of rice. Not only is it considered bad manners, it mimics the ritual that is performed in parts of Japan at a funeral ceremony. A bowl of rice, with the chopsticks standing vertically, is presented as a symbolic offering to the deceased relative. Furthermore, it is a practice for each family member to use chopsticks to pick out a piece of bone from the ashes after a cremation.

In his Conclusion, Cummins opines that "the loss of Japanese customs is certain, as no nation in the world remains untouched by our pervasive global culture". Another pessimistic viewpoint from the author who presents himself as an insider who knows Japan intimately? Maybe, but all of that remains to be seen. The least we can say is that nothing is certain where Japan and its people are concerned.