AND WAS JERUSALEM BUILDED HERE IN ASHTON-UNDER-LYNE?

Jane Shaw and Philip Lockley (editors). The History of a Modern Millennial Movement: The Southcottians. I.B.Tauris, 2017.
This collection of eleven papers traces the development of the various sects and groups claiming descent from Joanna Southcott (1750-1814 ), who proclaimed herself as the “Woman clothed with the Sun” out of Revelations and who believed she was about to give birth to a new Messiah, the Shiloh. Instead she died and her followers divided over the years into various groups.
🔻
Some became associated with the followers of Richard Brothers (1757-1824), who had claimed that the British were descendants of the tribe of Judah. The main figures in this tradition were George Turner and above all John Wroe (1782-1863) whose followers adopted Jewish dress, dietary rules and circumcision.

Wroe was perhaps most noted for his period in Ashton-under-Lyne from 1822 to 1831. The Southcottians had built up a significant presence in the Lancashire cotton and coal towns. A number of local mill and mine owners had joined the movement and contributed to it financially, which allowed the members to construct several buildings in the town, as well as 'Israelite' shops providing members, and the general public, with appropriate kosher food and clothing.

Central to the project was a 'Sanctuary' in the centre of Ashton, constructed to Wroe's strictures
on the types of building materials which should be used: stone, oak and mahogany, with silver and brass fittings. With two glass domes for light – there were no street-level windows – galleries on four sides, and seating for over 1000, it cost £7,000, probably close to a million pounds in current values, and was largely paid for by the owner of a local mill and ironworks. 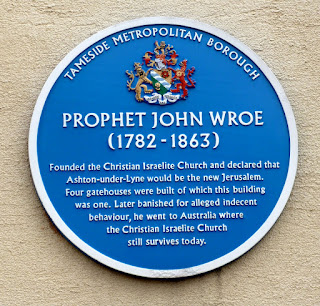 As well as the Sanctuary, there were four 'gatehouses' situated on the main roads leading north, south, east and west out of the town. The Southcottians must have made a considerable impact on theother residents of Ashton, with Sabbath processions through the town, headed with a wind band, hymn singing, and the congregation dressing in uniform: men with blue coats and white hats, women wearing white dresses, bonnets and embroidered veils.

Ashton, if not seen as the New Jerusalem itself, was certainly regarded as a prototype of the Heavenly City, and drew Southcottians from other groups around the country, who saw it as a 'gathering place' to prepare for the millennium.

The community began to disintegrate after an alleged scandal involving Wroe. The popular version is that Wroe asked the congregation to provide seven of their daughters as ceremonial servants, assigned as “a pattern of purity to the whole people.” Unfortunately shortly after this, three of the servants became pregnant! The girls made allegations against Wroe, which were never proven, but his fall from grace split the congregation and there was a riot in the Sanctuary, and the southern Gatehouse, Wroe's residence, was looted.

Although the congregation split, and Ashton-under-Lyne never gained the status of the new Jerusalem, Wroe's preaching and encouragement of missionary work established new Southcottian congregations across Britain and abroad. Wroe also continued the practice of having women preachers as a significant element of the group's services and proselytising.

Another controversial figure was a man who may or may not have been James Rowland White, who took the name James Gershom Jezebel and established a religious community in Gillingham. The sect promised bodily immortality but this did not come to James, who died of drink 1884. Other groups emigrated to Australia and the United States where some communities still exist.

Of these the House of David established by Benjamin Purnell in Michigan was perhaps the most innovative. Faced with gawking visitors he decided to make an opportunity out of a nuisance and established a theme park near, but also a safe distance from, his colony's living quarters. This theme park, Eden Springs included a miniature railway and a vaudeville theatre. Members also established a baseball team and a jazz band. None of this prevented Benjamin being indicted for sexual misdemeanours, perhaps because the state wanted his property. After Benjamin’s fall from grace the colony came under the control of “Judge” H. T. Dewhirst who turned it into a completely commercial operation including used-car dealerships, cabaret acts and fan dancing.

Benjamin’s widow Mary and some of her followers left and established their own colony Mary’s City of David but that too established a holiday resort, albeit a more respectable one, aimed at Michigan’s Jewish population, and featuring a vegetarian restaurant.

Two middle class English women Alice Seymour and Mabel Barltrop, revived a more traditionalist “back to Joanna” version of Southcottianism, stripping away the British Israelite themes. Mabel, who became known as Octavia because she was considered to be the eighth prophet in the Southcottian tradition, established the Panacea Society in Bedford. It was this organisation which established the practice of putting adverts in the newspapers saying “Crime, banditry and the distress of nations will continue until the Bishops open Joanna Southcott’s box” Though a box was opened under the auspices of Harry Price, with just some junk inside, the Panacea Society argued this was the wrong box and the adverts continued into the 1960s and beyond. The Panacea Society also sent out strips of linen bathed in healing water.

The last member of the Panacea Society died in 2012, and its assets have been turned into a charitable trust, archive and museum. It this archive which has in large part allowed the contributors of this book, to produce a modern scholarly study. Most of the people in this tradition have in the past been often treated as isolated cranks or charlatans. These contributors, mainly theologians, seek to treat the Southcottians as a serious religious tradition worthy of scholarly study.

Clearly the main readership for which this book is aimed are students of theology and religious history, but it should be of interest to a readership interested in social history and to a wider public seeking to understand the past in its own terms. It gives an insight into how much of a foreign country the world of 200 years ago might actually be and how remote from our own secular world. These movements are often born out of deeply religious milieus where the Bible was often the only source of reading material and the total focus of the imagination. That world is only a handful of handshakes away. When my own maternal ancestors [PR] moved into Ashton under Lyne in the 1830s, 1840s and 1850s they could easily have met people who had known John Wroe for example.

The study also highlights something that can be seen among a number of what originated as highly radical working class religious communities became successively more respectable and middle class. The radical heterodox world of Joanna Southcott and John Wroe gives way to that of the highly respectable conservative Anglican Mabel Barltrop, who bows to the patriarchal authority of the Bishops.

The study of such movements shows the continuing quest for the unrealisable dream of the Pure Land and the New Model People to populate it, such dreams are always bound to end in disappointment at best and catastrophe at worst.

The book has an excellent summary of archival sources, though these reveal one sad event, that material donated to the Tameside Local Studies and Archives by the last disciple of John Wroe connected to the town, who died as recently as 1980, had been handed over to a delegation from a British Israelite group surviving in Australia and is no longer available for outside scholars. Our advice to libraries and archives would be not to surrender anything without a court order!

The book is a collection of essays by a number of scholars, but unlike many other such compilations, it presents a readable and coherent narrative, which displays a sure editorial touch. Although scholarly it is accessible to the non-academic, and is enlivened by some interesting archive photographs, including the remarkable cradle built for Joanna Southcott in preparation for the arrival of Shiloh in 1814, which is now on display in the Panacea Society Museum in Bedford, an institution which seems well worth a visit. – Peter Rogerson and John Rimmer.

Burnell's sporting creation as a baseball, not basketball, team. American sports historians have written on the team, although I can't speak for anything on the religious group itself. Historian and science fiction writer has written "The House of Daniel," a parallel universe/alternate history novel about a similar barnstorming baseball team, although he throws in some funny stuff about zombies. One of the most intersting members of the team was Jackie MItchell, a female pitcher from Chattanooga, Tennessee, who was once struck out both Babe Ruth and Lou Gehrig back to back in an exhibition game in her home town. She was signed to a professional contract but was banned from organized baseball by the bigoted former federal judge Kenesaw Mountain Landis, who was the commissioner of major league baseball. Instead, the House of David signed her as a publicity attraction for their own games. At least one motion picture on baseball has the team making an appearance and, IIRC, mentions new players were often given false beards to wear until their own came in. I think Ms. MItchell was an exception, however.

A very interesting comment, thank you. I have amended the article to say 'baseball'.