THE STREAM OF LIFE

Catriona Hastings. City of Streams - Galway Folklore and Folklife in the 1930s. The History Press Ireland, 2017.

It would be an understatement to say that Ireland was very different in the 1930s than it is today. Then there was great poverty and hardship for a large part of the population. Life was hard for the many, and for some it was a matter of just surviving. Most rural areas and villages did not yet have electricity. This meant that in the 1930s there was still a strong oral tradition for the country people to tell stories for amusement and education. This was the last decade before the whole way of life began to change.
🔻
In anticipation of the changes that were inevitably coming, some enlightened officials within the Irish government launched a nationwide scheme to collect and set down in writing as much as possible of the extant oral Irish folklore. The Irish Folklore Commission was set up in 1935 for this purpose. In 1937 two inspectors from the Department of Education addressed a national conference of teachers to invite their participation in the Schools' Folklore Scheme.

This ambitious project, which lasted for eighteen months, was to involve all national school pupils aged 11 - 14. With the assistance and guidance of their teachers, they were asked to gather as much material as they could from their parents, grandparents and other older members of their families and communities. Every week they would write down the material in their school copy books. Apart from the value of oral tradition and stories thus recorded for posterity, the children would greatly benefit from the process of interviewing their relations and neighbours who would be glad to share their memories and knowledge. 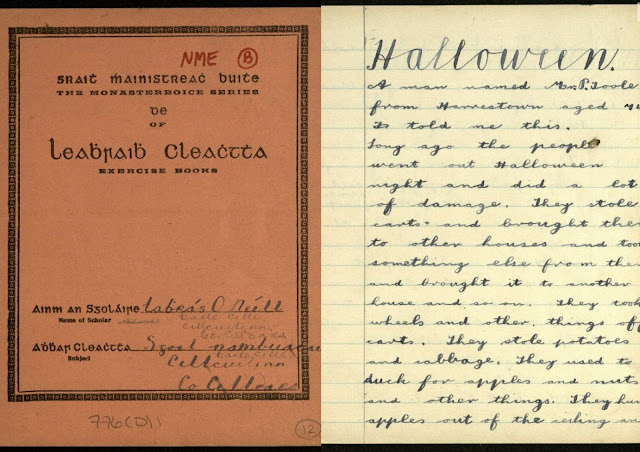 City of Streams is an entertaining survey of the Galway Schools' Collection taken from the original copy books. The title comes from an old Gaelic name for the city, and implies the "streams of living tradition" that sustained communities and held them together. In the 1930s Irish Gaelic was spoken in many parts of Ireland, especially in the West, and was officially taught as part of the curriculum. Most of the selected texts are written in English, but a large proportion are in Gaelic. The author, Catriona Hastings, is a former lecturer in Irish Studies at the University of Ulster. Now retired and living in Galway, she accessed the written material in the local library and online. All of the Schools' Collection for the whole of Ireland is gradually being digitised, and Galway's is already available. Where the original writing is in Gaelic, the author provides the original text and then her own translation in English.

In her Introduction, the author quotes from the handbook distributed to all schools, inviting pupils to "participate in the task of rescuing from oblivion the traditions which, in spite of the vicissitudes of the historic Irish nation, have.....been preserved with loving care by our ancestors. The task is an urgent one, for in our own time most of this important natural oral heritage will have passed away for ever." This was a very well planned operation. The handbook gave a list of topics to be covered as well as a range of questions to be asked for each topic. A few examples from the extensive list are: Lost Treasure, Local Place Names, Weather Lore, Home-made Toys, Childrens' Games,Holy Wells, Local Fairs, Festivals,Food in Olden Times, Old Irish Tales, Buying and Selling, Local Ruins, Old Graveyards, A Collection of Prayers, and there are many more.

The first Chapter, 'My Home Place', appropriately opens with reports written by children living in The Claddagh, which means 'shore' in Gaelic. It was formerly a fishing village of thatched cottages just outside the old city walls of Galway. In some ways it is representative of the changes that were about to sweep through Ireland. There are a few nostalgic black and white photos that show how utterly charming and picturesque it was, at least on the outside. Sadly, the 1930s was the decade when the village was demolished, to be replaced by a council-housing scheme. One child's report refers to the demolition of the old houses, and says that many people from there "went to America long ago."

Another child reports :"When Cromwell was coming ashore the people buried gold there. Claddagh people are descended from Spaniards and so they have a special ring. It is called the 'heart and hand'". The Claddagh ring, internationally famous as a symbol of love, friendship and loyalty, goes back at least 400 years to a master goldsmith who worked in the village. Rings of this type are known from Roman times. The Spanish reference is not historically accurate, but there was certainly some trading with Spain and the Basque region over centuries, and there may have been a few settlers from there. It is worth mentioning for the record that there would not have been any settlers from the Spanish Armada in 1588. Many hundreds of them survived shipwreck on the rocky west coast of Ireland, only to be ruthlessly executed after any valuables had been taken. It is certainly possible that gold and other treasure could have been taken and buried by lucky finders.

Throughout City of Streams there are vivid impressions of the old way of life. From a young age children would be expected to work and be useful. Some families made a living by picking winkles all day and selling them at a market. Often there was bartering with no cash involved. Twenty eggs could get you a pound of tea. The very poor people had no lamps but would make their own candles or tapers from rushes dipped in animal fat.

Children had to make their own toys. There are examples of balls made from bottle corks bound with cloth and tied around with woollen knitting thread, 'marbles' made from tar or candle grease rolled into a ball, catapults, bird traps, a fife made from an old bicycle pump with holes bored into the side, and hurley sticks. One child describes in detail how to make a rabbit snare and where to set it to choke the rabbit when he goes into it. This could provide food for the family, or a rabbit could be sold for a half crown which would be a good amount of pocket money.

Many people went barefoot in the summer. Water used for washing the feet should not be thrown out after midnight for fear of hitting the fairies. Some people wore wooden clogs, others wrapped animal skins around their feet, tied with thongs. It seems there was no leather tanning. Families made their own baskets from rushes and reeds. There might be only one blacksmith in the whole parish who shoed horses and made ploughs.

Sellers and buyers of livestock at markets would clap hands after reaching agreement, some 'luck money' would be given back to the buyer, and then they would invariably go to a local bar. Proceeds of sales mightoften get spent on drink. There is a factual account of three brothers who "were evicted from their house a long time ago. They were living comfortably in a small house in Foramoile. The soldiers evicted them one cold winter's day. They had gone to the fair a week before that. They sold a cow and drank her price. A man came at the end of the week to collect the rent. The poor creatures hadn't a penny to give him. Next day, eight soldiers came and knocked down the house. They didn't leave the house quietly." One can easily imagine it. 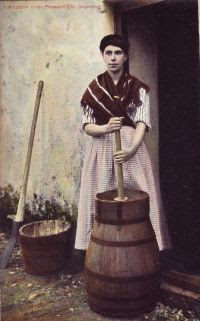 Fairies and superstitions were an important feature of everyday life. When milking a cow you would make a mark of the cross on her back using her milk to bless her. A mark of the cross on the side of a churn would be lucky for making butter. A burning ember might be put under the churn to stop the fairies from interfering or stealing the butter, which was a most precious commodity like gold. If all you had to eat was potatoes, a generous amount of butter and some milk could make it seem like a feast.

It cannot be overemphasized how important to rural Irish people was the whole idea of 'luck', balanced with the concept of consequences for your actions. It was a common practice to nail a horseshoe on the door of a stable or hang one in the house to bring good luck. There was folk-magic for any kind of disease or ailment, and all manner of little rituals to ward off harm. It was believed that putting some salt in your mouth would keep the fairies away from you, especially at a wake. All of this indicates that there was a real fear of fairies and the mischief they might do.

Oral tradition and wisdom is often conveyed in stories and riddles. In these old Irish stories there is very often a supernatural or religious element, with a moral lesson to be conveyed. Several stories concern grown-up children leaving home to make their way in the world. The mother might offer them half a loaf with her blessing, or a whole loaf with no blessing. Needless to say, various horrible things happened to those who were greedy, and rewards came to those who took the blessing.

Wisdom was often found in the ready Irish wit in conversation. A man who was exasperated by his son's refusal to get up before noon told him a story "that he thought would change him. 'There was a man,' he said, 'who got up early one day and he found a purse with a lot of money in it.' The son answered, 'The man who found the purse wasn't up as early as the person who lost it!'" And I like the story of an uneducated man on a train who could not read but accepted a newspaper from another passenger who had finished with it. "He turned the paper upside down and began to look at it. The first man said to him, 'If you were to turn it up the other way, you'd be able to read it better.' 'Oh,' said the second, 'Wouldn't anyone be able to read it like that?'"

City of Streams is a delightful read and is well laid out with an abundance of original black and white photos of Galway and the surrounding area. Catriona Hastings is to be congratulated for her thoughtful selection and presentation of this material from the Schools Folklore Scheme. There are many class photos of the schoolchildren themselves, arranged in rows, and others of children dressed up for their first communions. Looking at their faces, some staring and serious before the camera's lens, others smiling innocently or mischievously, it is sobering to think that most of them will have passed away by now, but a few will still be alive, possibly telling their tales to their grandchildren and great-grandchildren. We can be grateful to all of them. --  Kevin Murphy.

Looks like a very interesting read so thank you. I’m going to buy the book.

An aside, current DNA evidence seems to show the Basque were the first people to inhabit Ireland and portions of Scotland after the last two ice ages. They retreated after the first and returned after the second as well. That evidence could certainly change much of historical and cultural understanding.