R. William Weisberger. Speculative Freemasonry and the Enlightenment: A Study of the Craft in London, Paris, Prague, Vienna and Philadelphia, McFarland & Company, 2017.

The title and subtitle succinctly encapsulates this book’s subject matter and sets the tone for what is a solidly academic and strait-laced work. It’s the second edition of a book that began life as the author’s doctoral dissertation in 1980, R. William Weisberger now being a professor of history in Pennsylvania - and a proud Freemason.
🔻
The major change from the first, 1993, edition is the addition, as appendices, of two previously-published papers examining Benjamin Franklin’s Masonic activities in Paris and Freemasonry’s role in the campaign for Jewish civic rights in Habsburg Austria and the fledgling USA. It is, in Weisberger’s words, "a comparative analysis of the Craft or Freemasonry in four European urban centers and one American city during the eighteenth century," which aims to establish the contribution made to the Enlightenment by Speculative Freemasonry - the funny handshakes and apron-wearing kind as opposed to the ‘operative’ form of actual stonemasons, i.e. what most of us think of as ‘Freemasonry’ pure and simple.
The cities are London, where it all began, Paris, the two Habsburg cultural centres of Prague and Vienna, and Philadelphia – although the last isn’t given as full a treatment as the others, only being discussed in an appendix in relation to one of that city’s lodge’s part in the campaign for Jewish citizenship. There are chapters detailing the organisation, activities, membership and social composition of Masonic lodges in the four European cities, followed by an analysis of their common features and how they differed as a result the varying social and political environments.
It’s a book written by a historian for historians, assuming a fairly detailed knowledge of the period, the reader being expected to be familiar with the work of scholars whose last names are dropped in casually, and with terms such as ‘Whigs, in the Harringtonian sense’, ‘Anglican Latitudinarians’ and ‘Thèse Nobilaire’. 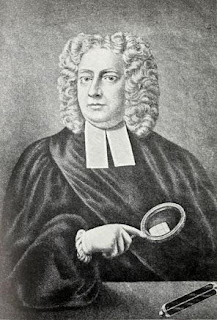 For Weisberger, Speculative Freemasonry isn’t something that just happened to emerge at the time but was deliberately created in the 1720s as ‘a vehicle for the promotion of Newtonian ideas and other tenets associated with the Enlightenment’, being a repurposing of the operative guilds that were much in evidence in post-Great Fire London. The two prime movers – the ‘high priests of Speculative Freemasonry’ - were Newton’s former assistant Jean Desaguliers [left] and John Anderson, both Protestant clergymen, who according to Weisberger devised the rituals and symbols of the three basic Masonic degrees as ‘suitable teaching instruments’ and ‘to explain salient Enlightenment ideas’.
I’m not sure it’s quite as straightforward as that, as there’s evidence (not dealt with by Weisberger) that Freemasonry in its speculative form was around at least 70 years earlier; because of the lack of available records, distinguishing what went before from what was an innovation of the 1720s can only remain a matter for speculation (no pun intended, probably).
Be that as it may, for Weisberger Freemasonry was all about the Enlightenment, being invented to spread key Enlightenment ideals and values that were based on the application of reason to all areas of knowledge – scientific, religious, social and political: "The rites, legends, symbols and teachings of the order offered vivid explanations of salient doctrines of the Enlightenment… Its rites, also, contained explications of the tenets of classicism, deism, religious toleration, and humanitarianism," as well as concepts of constitutional government and civil liberties. Weisberger frequently speaks of Freemasonry as an attempt to create a ‘civil religion’.
However, beyond showing that Freemasonry swam in the intellectual and social current of a vibrant era of change that we now label the Enlightenment – how could it not? - it’s unclear exactly what Weisberger is claiming for it. He doesn’t establish that it was the driving force of the age or that the Enlightenment couldn’t have happened without it. While he shows that some lodges were set up or used to nurture and disseminate Enlightenment ideals, many lodges weren’t, and those ideals were being spread by individuals and organisations outside the lodges; it was, after all, the spirit of the age.
As Weisberger notes, there were many other societies – learned, literary, cultural – and meeting-places for networking and the discussion of ideas – coffee houses, taverns, clubs – that performed the same function as Masonic lodges. While it’s true that Freemasons made major contributions to the Enlightenment, that’s not necessarily to say that they did so because they were Masons – and there were non-Masons who made contributions that were just as important. In short, although Weisberger demonstrates that the Enlightenment influenced Freemasonry, he doesn’t, despite his best efforts, show that Freemasonry had a special influence on the Enlightenment.
I frequently got the impression that Weisberger’s enthusiasm for Freemasonry and pride in its heritage has lead him to overstate his case. For example, he notes that some Masons in London who belonged to learned societies were also members of academies in other European cities, and from this concludes that through these individuals ‘Masonry served as an important channel through which the Enlightenment could develop in other places’. It’s odd logic and claims rather too much for Freemasonry: wasn’t it rather the learned societies and academies that were the channels? 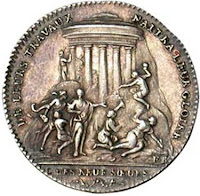 SEAL OF THE LODGE OF THE NINE SISTERS
Similarly, there’s an element of self-fulfilment in Weisberger’s concentrating on Masonic lodges that were explicitly set up to champion Enlightenment ideals, even though they were the exception rather than the rule. For example, in the chapter on Paris he focuses on the Lodge of the Nine Sisters, founded in 1776 by the astronomer Jerome Lalande explicitly to discuss and promote the new Enlightenment ideas, and whose membership included Voltaire, Dr Guillotin, Benjamin Franklin and the Montgolfier brothers. However, he notes that it was looked at askance by Paris’s Masonic authorities – who eventually closed it down in 1792 - precisely because its functions and activities were so different from those of other lodges.
The same applies to his singling out of the True Harmony Lodge of Vienna, which – because that city didn’t have the learned societies that flourished in London and Paris – was established in 1781 by the ex-Jesuit geologist Ignatz von Born explicitly as such a society, for example sponsoring literary and scientific journals. Weisberger makes much of the fact that many of its members were active supporters of political and religious reform. However, this was a famous period of reforms of the state and legal system – including its relationship with the Church and moves to grant greater rights to Jews - that were initiated by Emperor Joseph II (who wasn’t a Mason).
So those reforms were already happening anyway, and it’s not surprising that members of the Viennese intelligentsia and literati who were attracted to True Harmony should espouse them. In any case, the lodge was only active for four years, being closed down by Joseph in 1785 in the wake of the Illuminati scare. (Confusingly, Weisberger gives as one of the reasons for Joseph’s change in attitude to Freemasonry ‘the strident criticisms of other members of the True Harmony Lodge against the emperor’s reform program’.)

This selectivity – highlighting only examples the fit the thesis and ignoring what doesn’t - is largely a consequence of Weisberger’s adherence to the traditional view of the Enlightenment as a period in which reason triumphed over the irrational forces of religion and superstition, a view that is increasingly being challenged by historians of the period, for example John V. Fleming and Paul Kléber Monod, who see it as an example of later historians rewriting the past to make it what they think it should have been: the ‘Enlightenment’ label was, after all, given to that era in hindsight in the late nineteenth century. Scholars such as Fleming and Monod argue that ‘irrational’ thinking, especially that of the occult philosophies, made just as important a contribution to the Enlightenment, and that there wasn’t the clear distinction - or even clash – between science and the esoteric that later generations of historians assumed.
Weisberger, on the other hand, treats the Enlightenment not only as if it was about scientific and rational thinking but also as if it was a specific ideology, a movement or campaign to which thinkers of the time signed up and to which they tried to convert others; he refers to the Enlightenment as a ‘cause’, and the individuals he discusses ‘enlighteners’ as if they had consciously taken on the task of spreading this new creed.
Weisberger’s maintaining of this old-school perception of the Enlightenment also produces a selective depiction of Freemasonry itself. In emphasising the influence of the scientific and rational he makes it seem that that was all Freemasonry was about. He ignores its esoteric aspect, and the ‘occult’ pursuits – alchemy, Mesmerism, and so on - of many Masons, including those of some of his ‘enlighteners’. Even Weisberger’s putative inventor of Speculative Freemasonry, Desaguliers himself, wasn’t solely the ‘gospeler of mechanism’ that Weisberger dubs him, rather one of what Monod calls the ‘Newtonian magi’ who followed Newton’s blend of experimental science and occult philosophy.
While the big picture might be flawed, when it comes to the detail there’s a lot of fascinating information, as much in the context-setting of the scientific, cultural and political environments of the cities discussed as about the early history of Speculative Freemasonry.