Most accounts of the spread of Christianity in its early centuries tell the story through the actions of emperors and bishops and the structuring of the Church into an institution with authority and a clearly-defined message. In contrast, in what he calls a ‘remodelling’ of the subject, David Frankfurter, professor of religion at Boston University, takes a ‘bottom up’ approach.
🔻
He explores what it actually meant for the ordinary folk – who were less concerned with Christian ideology and theology than with how it helped them deal with the problems and uncertainties they encountered in their everyday struggles - to become Christian; in short, Christianity as a ‘lived and local religion’.

Frankfurter’s focus is Egypt in late antiquity, that is between the fourth and seventh centuries – from Constantine’s legalising of Christianity in 323 CE, and more significantly Theodosius’ decree of 381 making it the only religion of the Roman Empire, to the Islamic hegemony – although his conclusions, he maintains, can be applied across the Late Roman world. He bases his study on the latest archaeological discoveries and textual scholarship, also drawing on parallels from the Christianisation of other places and periods (sometimes much more recent, as with colonial-era Latin America), as well as anthropological and ethnographic research into religion at the folk level in general.

After setting out his stall in the opening chapter, Frankfurter devotes chapters to specific aspects of the Christianisation of Egypt: the domestic sphere, with such concerns as family, fertility and the protection of the home against malign forces; the holy man - the ‘indigenous charismatic leaders who spearheaded the process of Christianizing villages and regions’ and who were remembered as saints; the shrines that grew up to those saints, supplanting the old temples as places of popular devotion and divination; the workshops and artisans that produced the votive objects for the shrines and home; the writings of monastic scribes; and finally the landscape and topography of Egypt itself – the way that temples and numinous sites were either supplanted by or incorporated into Christianity.

Frankfurter’s core argument is that Christianisation was less a process of conversion – persuading or forcing the people to switch from their old beliefs to the new approved faith – than a synthesis of traditional beliefs and practices with the new religion, a syncretism that was for the most part carried out at the popular level in ‘a locally negotiated process of selection and recombination’, not set by the ecclesiastical authorities. Indeed, those authorities had to struggle to keep control of the process in the face of popular creativity, as evidenced by their denunciations of various practices of the common folk, and even monks, as pagan, heathen or demonic. Frankfurter frequently quotes from the sermons of the late fourth/early fifth century Abbot Shenoute of Atripe, who condemned such practices as monks dispensing charms made of crocodile teeth, snakes’ heads and fox claws to which they had given a Christian blessing.

Perhaps most significantly for readers of this site, this way of looking at Christianisation leads Frankfurter to challenge the conventional wisdom that elements of pre-Christian religions that appear in a Christian context represent ‘pagan survivals’ – a term, and concept, that he rejects as giving a false impression of what really lay behind such continuities. It wasn’t, he argues, as simple as a clash between a new, officially sanctioned, religion and locals stubbornly, sometimes clandestinely, clinging to the old ways. Rather, traditional forms of religious expression were adapted to the new religion; for example, traditional amulets and charms were still used, but now invoked the aid of a saint (as with the charms Shenoute denounced). In his own words, Frankfurter’s aim is ‘to shift the focus from collections of isolated “pagan survivals” to the ways that people in Christianized cultures maintain religious forms as components of tradition and social interaction, often in the service of expressing Christianity.’ 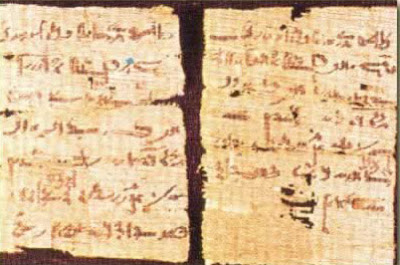 One of his examples of such adaptation is the ‘ticket oracle’ [above], a traditional Egyptian method of divination carried out at temples since the New Kingdom, in which two alternative courses of action were written on separate pieces of papyrus, one of which was selected by the god (or their priestly representative). The practice continued in Christian Egypt, but now at the shrines of saints, recasting a traditional way of accessing oracular power in a way that acknowledged the special status of Christian saints, as well as the authority of the Church.

Another example, to which Frankfurter frequently returns, are the terracotta female figurines, in various forms and poses – nude or clothed, sometimes pregnant or suckling infants – found in great numbers at saints’ shrines, and which were clearly an important part of popular devotion at them. Frankfurter disputes historians’ association of these figurines with similar, earlier images of goddesses such as Hathor and Isis, arguing rather that the similarity comes from workshops and craftsmen continuing to use traditional, standard forms for the same purposes, such as ensuring fertility. He applies the same argument to those figurines depicting a woman suckling a child that are frequently linked to classical images of Isis – as well as to later icons of the Virgin Mary – seeing all these images as variations of a ‘maternal fecundity figurine’ that had been common throughout the Mediterranean world since the Bronze Age: ‘breastfeeding scenes are well-represented variants and in no way require a particular mythological context or goddess figure as a template.’

Such examples, and Frankfurter’s general questioning of the notion of pagan survivals, do, of course, hold implications not just for mainstream history but also the ‘alternative’ and esoteric versions.

Frankfurter certainly presents a new and stimulating perspective on the early history of Christianity, and makes a lot of perceptive points. I did, however, sometimes find myself wondering if his enthusiasm for his remodelling hasn’t introduce a degree of circularity into some parts of his argument.

The perennial problem in trying to reconstruct the mindset of the ordinary people is that their own voices have left little trace in history – surviving writings are about, not by, them, and so reflect the perception of those higher up the social scale. Frankfurter therefore has to read between, or rather behind, the lines of, for example, the complaints of Abbot Shenoute and the later accounts of the lives of saints – which recast folk practices in stark Christian terms as the work of demons – and to interpret the archaeological evidence, for example to work out what those mute female figurines actually meant to those who placed them in a shrine. As a consequence, there’s a lot of ‘probably’ and ‘most likely’ in his reconstruction of the motivations that lay behind such practices – probable and likely, that is, according to the model on which Frankfurter bases that reconstruction, which then uses as support for the model.

I was particularly unsure of his explanation of the appearance of the names of the old gods (Amun, Horus, Thoth) in Coptic charms, written by Christian scribes and applied in a Christian context – the book opens with one to ‘Jesus Horus’ and his mother Isis – which, Frankfurter argues, doesn’t imply a reaction against Christianity or even a specific veneration or memory of the deities in question, but simply represents the perpetuation of ‘efficacious speech forms’ (folk charms and songs) in the new times.

Christianizing Egypt is written in a solidly academic but readable style, with plenty of black and white illustrations and colour plates. It assumes a fair amount of background knowledge of the subjects explored, but presents a wealth of fascinating material for those with an interest not only in early Christianity and the traditional Egyptian religions, but also subjects such as magic in the ancient world and demonology. -- Clive Prince.