Cartomancy – divination through playing cards – probably originated in the eighteenth century, and practitioners originally used the normal 52 playing-card deck, or the smaller 32 card deck used in France and elsewhere for the game of piquet.
🔻
Later the tarot deck became particularly associated with the practice, but this was originally the standard deck used for tarot card games that were played across the Continent, but which never reached Britain.


There were variations of the tarot deck used in different regions and for different versions of the game. The one first used for divination was the Tarot de Marseilles, which was for centuries the standard French pattern, promoted largely through the writings of Jean-Baptiste Alliette (1738-1791) who under the name Etteilla – his surname reversed – popularised the mystical use of tarot cards. 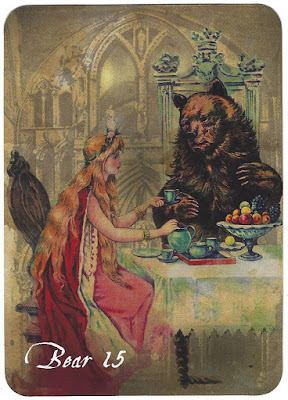 Later writers, particularly Antoine Court, (1719 -1784) writing under the name Antoine Court de Gébelin, created a mystic, but totally fictional, history of the tarot, tracing it back to ancient Egypt. From the late nineteenth century and throughout the twentieth, a huge number of tarot patterns were devised, of greater or lesser artistic quality. Two of the best know are the Rider-Waite deck, and Aleister Crowley’s Thoth tarot, illustrated to his instructions by Lady Frieda Harris. These were all largely framed by the original designs of the Marselle Tarot.

From the early nineteenth-century a number of other cartomancers began producing cards unrelated to the tarot pattern, and specifically designed for divination according to their own systems. One such was Marianne Lenormand (1772-1843) who produced a deck following the 36 card format of traditional French games, but with entirely new designs which did not conform to the tarot pattern of four suites and trumps (or, is you prefer, minor and major arcana).

None of this tells us whether or not the tarot has any actual supernatural properties, or if it really ‘works’. Of course, that rather depends on what you mean by ‘works’. Does it actually tell your fortune, can a random spread of cards do that? As a fully paid-up Pelicanist Sceptic, I am obliged to say no it can’t, but as a Fortean Magonian I am obliged to add a bit of wriggle room.

Some of my best friends are sceptics, and a few of them have rather more time for the tarot than you might suspect. Not because the cards themselves have a ‘magical’ quality, but because a contemplation of the imagery – random as it is – seems to stimulate mental links that would not come to mind otherwise. The potential value of the tarot lies inside the sympathetic and receptive practitioner and her – it’s mostly a her – relationship to the subject of the divination. 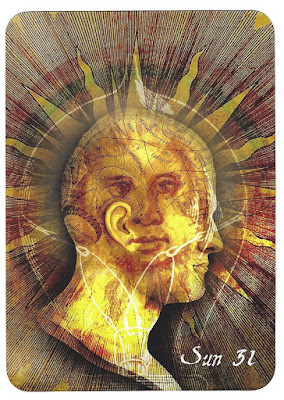 It might follow then that the effectiveness of a tarot, or other cartomantic deck, depends on the richness of the design and the opportunities it gives for the brain to make those subjective leaps and links when conferring with the person sitting on the opposite side of the table. If that is the case, the Lunar Nomad Oracle seems likely to be a very effective deck. But as I am not a practitioner, this must be a matter of speculation.

The Luna Nomad Oracle consists of a deck of 43 cards and a small-format paperback of 142 pages, neatly boxed. Although the book claims the deck is based on the Lenormande deck, the designs are far removed from the early nineteenth century originals, and seven extra cards seem to have crept in somehow.

But the new designs are superb. Based on old illustrations, photographs and prints they are rich, surreal collages of imagery, beautifully coloured, and imbued with a mystical quality. The book which accompanies the deck gives a description of each card and an interpretation, advising the reader of ways in which the imagery can be read. Whether or not this is helpful I cannot say, but the descriptions do seem more nuanced than some tarot ‘interpretations’ I have seen.

I would say that this is one of – if not the – most beautiful divinatory card decks I have come across, and is well worth collecting as an artwork in its own right. I don’t know how easy someone working with the deck would find it to use, as the cards are very large, (155mm x 115mm) but it is difficult to see how the detail and richness of the designs could be adequately depicted in a smaller format. A superb addition to any card collection. – John Rimmer