BEFORE YOUR VERY EYES

I found this a thoroughly enjoyable book full of interesting facts and amazing characters. It might better be called “A Magical Mystery Tour Of The Great Illusionists”. There are escapologists, mediums, memory acts, Indian rope trick performers, mind readers and animal acts, to name but a few.
🔻
The author gives details on all of the acts' background history and performances, and provides images of rare posters and correspondences between the artists. There may be a bit too much information for the casual reader but it is a mine of information for the enthusiast.

He details how some of the artists met their maker, and indeed most met very interesting job-related deaths - I wouldn’t want to catch a bullet fired from a rifle with my teeth!

The public during this period treated these performers like today's rock stars and the audiences were mesmerised by them, resulting in many newspapers challenging them to admit fraud. This is well shown in the book with many extracts and cuttings from these press releases which are amusing to read as they employ old fashioned semantics. 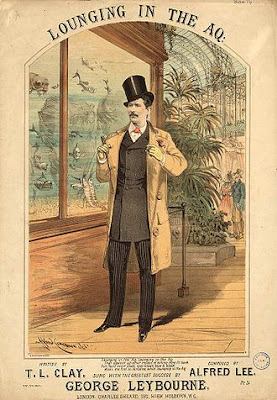 One of the performers, Ching Ling Foo, had his act stolen by another performer who changed his name to Chung Ling Soo. They had a challenge for a forfeit of £1,000 if Ching Ling Foo succeeded in doing any of Chung Ling Soo’s twenty tricks. He failed to turn up, causing damage to his reputation. Many illusionists checked out each other's performances to add to their own repertoire as the stakes were high to gain more kudos and greater audience capacity.

The author relates that characters known as Lions Comiques [right] were as popular in Victorian times as boy bands are today, smartly dressed young men known as 'Swells' who sang songs about the good life while sipping champagne. Speciality acts were many and included one-legged dancers, ventriloquists, trick cyclists, jugglers and sword swallowers.

Houdini was the highest earner of the time and had to accept many challenges from the public and newspapers, such as the Daily Illustrated Mirror which had a unique pair of handcuffs made to give Houdini the ultimate escapology challenge. The handcuffs took five years to make and allegedly no mortal person could pick the lock mechanism. Houdini eventually succeeded in this endeavour after great publicity surrounding the challenge. 4,000 people and 100 journalists turned up to witness the feat. It was later said that when his wife came on stage to kiss him she secretly passed a key to his mouth that enabled him to release the handcuffs. This was denied strongly by Houdini and he later went on to make movies of himself performing spectacular escapes and feats.

This book takes you back to a time of music halls and variety theatres, long before television, radio and cinema, when people really believed in their magic and were enthralled by these performers. Their promise was to allow you to escape your humdrum life and enter the world of the Great Illusionists! – Gerrard Russell.