This is a superb title for a book that examines such a fascinating subject. Magic performed for entertainment works when it appears that something impossible has just happened before our very eyes, even at close range. We are delighted and baffled at the same time. Somehow we know that our senses have been deceived but have no idea how it was done. With no immediate rational explanation, we are left wondering: was it an illusion or could there really be a supernatural power at work?
🔻
Dr Gustav Kuhn, the author of this engrossing book, has the distinction of being Reader in Psychology at Goldsmiths, University of London, president of the Science of Magic Association and also a member of the Magic Circle. As a seasoned lifelong performer of entertainment magic he has valuable insider knowledge and understanding of how most magic tricks are accomplished. Drawing on his own experience, and the latest psychological and neurological research, he advances a scientific theory of how we are so comprehensively deceived. Some of the data comes from the MAGIC (Mind Attention and General Illusory Cognition) lab at Goldsmiths. There they have cutting-edge eye-tracking technologies to investigate how magicians misdirect our attention.

Dealing first with the important question 'What is Magic?', Dr Kuhn describes how he first became interested in magic. When he was thirteen, his school friend made an egg appear from behind his ear. As he puts it: "Deep inside my brain - the dorsolateral prefrontal cortex to be precise - there was a serious conflict between what I thought was possible and what I had just experienced." Apparently, research shows, "only 40 percent of us really want to know how a trick is done". knowing how it is done can be a "bit of a letdown". One may lose the sense of wonder. Nevertheless, he discovered that he was one of the 40 percent who really wanted to know.

This alone is an interesting fact, that young Gustav's life was changed by that egg trick. He began to question how it was done. He had no reason to question the authenticity of the egg. It looked perfectly real, yet there was no way his friend could have hidden a hard-shelled egg in his hand without being noticed. On further investigation, he found that the egg was made of sponge covered in white fabric. His friend had squashed it into a fraction of its size in his hand, concealing it with a technique called 'palming', "one of the most powerful methods in the magician's toolkit". Gustav and his friend started to study magic tricks together, attending magic conventions, and so on.

From his own experience he can say that it takes thousands of hours of "practicing sleight of hand and choreographing magic routines" to become a professional magician. But defining exactly what magic is may be a lot more complicated than simply explaining how a trick was accomplished. It certainly involves psychological and philosophical questions, such as the nature of perception and consciousness itself. "Any demonstration that appears to contradict our current understanding of science is generally considered to be magic. Indeed, the current Oxford Dictionary defines 'magic' as 'the power of apparently influencing events by using mysterious or supernatural forces."

Readers of Magonia Review will have their own thoughts on this, but for 'real magic' I would put the emphasis in this definition on 'influencing', as opposed to 'controlling'. An appropriate term for the effects of some workings may be 'paranormal phenomena', but such things are rarely, if ever, done for entertainment and would rather be carried out discreetly, as part of a process with a purpose.

By contrast, the art, or science, of the stage magician, the 'conjurer', is to perform something that definitely gives the impression of a mystical power at work. He has to be in total control of proceedings and is actually, in effect, a master of deception. The paraphernalia of cloak, top hat and magic wand are examples of traditional accoutrements of the performer and are very much part of the show. Creating the right atmosphere is important for the observing audience to be receptive to the various techniques of trickery that make illusions so convincing.

As Dr Kuhn points out, being fooled is usually an unpleasant experience, such as being tricked into buying a 'lemon' from a used-car salesman. So why do we feel delight when a magician makes a real lemon appear from beneath a cup? The answer can only be that magic and deception tap into different psychological mechanisms. "At the very least, this difference shows that magic is a distinct experience." He goes on to examine the moral question of lying and deceit in our daily lives. We may say lying is wrong, but "there are lots of situations in which we actually prefer living with a lie rather than the truth". One example is that most extra-marital affairs go undiscovered, although it is estimated that 40 to 50 percent of married people have engaged in such relations. The lack of motivation to uncover the truth is known as the 'Ostrich Effect', for obvious reasons. 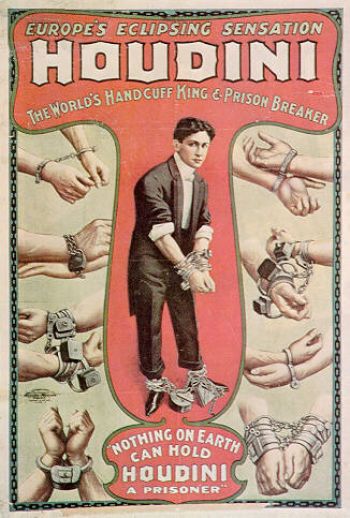 Harry Houdini famously attacked anyone claiming to have spiritual powers, but he himself was not above making himself appear almost superhuman. He was the world's most famous escapologist, creating the illusion that he could escape from anywhere, yet it was all based on trickery. While he was expert at picking a lock, every aspect of the escape was meticulously planned, including the bribing of insiders. Another revelation is that although the escape itself might take only a few seconds, he would wait several minutes, often reading a magazine to pass the time. Then he would spray himself with water to emerge looking properly sweaty and exhausted.

When speaking of spiritual powers, one's thoughts may turn to religious leaders and teachers, in particular Indian gurus whose followers claim they possess supernatural powers. One prominent figure was Sai Baba, who appeared to manifest sacred ash and gold jewellery directly from his hand. There is no direct comment on such claims in this book, but it may be assumed that any accomplished stage magician could reproduce such apparent wonders. Even so, it would not be wise to assume that every miraculous manifestation is fraud and trickery.

Supplicants to the ancient temples of Egypt and Greece may have been convinced that they were seeing real magic in front of the altar. For example, a priest might light a fire on the altar, after which a set of heavy stone doors would open. These illusions would provide 'proof' of a priest's supernatural powers. In fact, the true power behind the phenomenon was a hydraulic system using an expansion tank and counterweights. Dr Kuhn's book provides a helpful diagram, based on the description of Heron of Alexandria (ca. 10- 70 CE). This system is what today might be called 'special effects'. In theatre, and then the modern film industry, some techniques of stage magic were employed for special effects. 'Pepper's Ghost' is a famous example.

After reading this book, even though no actual inner secrets are revealed, you may find yourself seeing things differently. This is certainly not a 'how to' book on creating illusions for entertainment, but rather explains the processes at work in our own perceptive and cognitive apparatus. Here we learn details of how sight can be deceived by use of the 'blind spot' in our retinas, the effects of blinking, our susceptibility to misdirection, and many more techniques that are entirely psychological.

One of the main conclusions to come from Dr Kuhn's research is how our eyes may see without noticing, meaning that there is some kind of lapse in attention. Many of us have had the slightly bewildering experience of looking for something only to find eventually that is was right in front of our eyes. We might even insist, or speculate, that something paranormal had happened. Did the item dematerialise for a while? Or maybe a mischievous entity removed the item temporarily to confuse us? If our own minds can play such tricks on us, then it is obvious that a conjurer can exploit this inherent potential weakness in human perception and awareness. The author insists that 'misdirection', in various forms, is the main technique used to accomplish illusions and magic tricks on stage. 'Forcing' and 'illusion' are other techniques that are frequently mentioned.

Sometimes, though, even a seasoned performer can be amazed and confused by another magician's performance: "For magicians, the defining feature of an illusion is simply its scale." The author was blown away by a stage illusion by David Copperfield where his body was sawn in half by a circular saw. His body was in full view and the table was far too thin to hide a second person. For Kuhn, this really seemed to be 'impossible' no matter how hard he looked. This caused him to look even deeper at his own perceptions to see how the mind can be so thoroughly tricked into seeing 'something impossible'.

Hypnotic or subliminal suggestions may sometimes play a part. A good example of this appears in the chapter 'Mind Control and the Magician's Force', which for me had the most interesting material concerning the questions of free will and suggestibility. In the late 1990s Derren Brown pioneered a new type of magic that is often called 'mentalism', a kind of mind control. In one such televised performance he had a volunteer browsing through Hamley's toy store to choose one of nearly a quarter of a million toys. To her absolute amazement, Brown had predicted her exact choice, a giraffe. He then he went on to apparently explain how he did it, using subconscious priming with gestures and words whispered near to her ear.

At the end of the chapter, having thoroughly discussed all the ramifications of free will and whether it is an illusion, one is still left wondering. Referring back to Derren Brown's performance, he says "there must be more to the illusion than meets the eye. While many other forcing techniques undermine our sense of free will, Brown's unconscious persuasion is implausible if not impossible." Thus, as a scientist, Kuhn says that "unconscious persuasion is a pseudo-explanation", and that he has "no intention of revealing how his trick is done, nor the right to do so."

Magicians in general, and members of the Magic Circle in particular, are bound by rules of confidentiality. All we can assume, therefore, is that there is a practical solution and we have to work it out for ourselves. At the very least, Gustav Kuhn's thought-provoking book provides abundant clues as to how magic succeeds in giving the illusion of 'impossibility' right under our gaze.

This, then, is the mysterious nature of magic, awareness and perception. There is no final answer to anything. Psychologists still don't know how exactly the brain works nor can explain consciousness itself. Physicists don't understand how gravity works, nor what dark matter and dark energy are. The 'Big Bang Theory' says that the entire visible Universe exploded from a single point over 14 billion years ago. That may be the greatest magic trick of all. Maybe the Universe itself is conscious and magical. If we ask 'God' how he did it, he might quote Tommy Cooper and say 'Just like that!'. -- Kevin Murphy.