IT'S ODD UP NORTH


These two books are from a series by Amberley Press, recounting traditional tales of the counties of England. I have chosen Lancashire and Cheshire as they are the counties where I grew up and heard many of these stories as a child. I was particularly drawn to the tale of the 'Childe of Hale'.
🔻
Hale is a small village, just outside the boundary of the city of Liverpool, in an area annexed by Cheshire and incorporated into the borough of Halton, although the story is told, correctly in the Lancashire volume of this collection. I was very tall as a boy (and still am for that matter) and people would say to my mother “he's going to be like the Childe of Hale when he grows up”. Well fortunately I wasn't, because the Childe was reputed to be nine foot three inches (2.8 meters) tall, which even as an adult leaves me a long way behind. 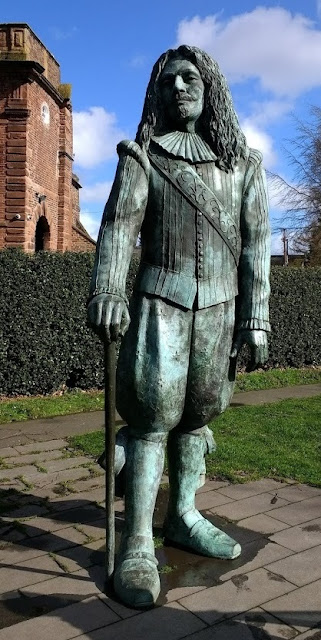 His name was John Middleton, and he was appointed as a bodyguard to the Sheriff of Lancaster, and on being invited to the Court by James I, was challenged by the king's champion, who came off much worse in the ensuing match. John was dispatched back to Merseyside, with a substantial pay-off. He spent the rest of his life rather sadly as a local 'character' and his grave can still be seen in the village churchyard with an inscription recording his alleged height. The picture shows a statue of him in Hale village, by Dana Gorvin

Half a mile from Hale, and just inside the modern boundary of Liverpool, lies a beautiful Tudor mansion, Speke Hall. Nowadays the main disturbances in this otherwise tranquil spot are the planes arriving and taking off at John Lennon Airport (“Above Us Just the Sky” is its slogan), but historically the Hall has also been troubled by a classic 'White Lady' ghost, reputedly the wife of a former owner, a notorious rake, who bankrupted his family, resulting in his wife throwing herself and their baby son into the moat and drowning. Rather spoiling the story, the son is actually recorded as living into his sixties!

The moat now, incidentally, is an attractive grassed feature around the Hall, much enjoyed by visiting children who take delight in rolling down it.

As well as the classic genre of ghosts stories, other tales in this collection and the companion volume for Cheshire, include traditional accounts of meetings with supernatural beings, elves, fairies and the north-west's own species of hobgoblin, the boggart, who could be either a frightening spectre or a cheeky trickster, and is immortalised in the name of the Manchester neighbourhood Boggart Hole Clough.

There are also historical accounts which have entered the folklore of the area, like the 'Cotton Famine' when workers and mill-owners such as William Boardman of the Farington Mill near Leyland, boycotted cotton imports from the slave states during the American civil war. Although this meant many faced destitution, and the mills bankruptcy, they continued their boycott, with Boardman paying what wages he could, even though there was little available work, and cancelling rent arrears to the tenants of their tied cottages.

In Stalybridge, Cheshire, the cotton famine turned nasty, as arguments over the distribution of charitable food tokens escalated into a pitched battle in the streets, with buildings looted and torched, and which was only put down by the arrival of a troop of Hussars from Manchester,

Much of north Cheshire is built on the remains of a salt lake, and salt mining was a major local industry; one mine is still in production. We learn that in the nineteenth century, although many women were employed in salt mines in Worcestershire, there were none in Cheshire, as in order to work effectively a state of semi-nudity was required. Although this sort of thing might be acceptable in Worcestershire it was certainly not tolerated in Cheshire!

Those of us who know the areas will always wish that their own favourites tales were included, and I would love to have seen the story of the Butter Boggart of Old Lostock getting a mention. You can read Peter Rogerson's investigation HERE.

Most of the accounts in both these volumes are of the “once a long time ago” sort of provenance, and although a short bibliography is given, it would have been helpful to know a little more about the source of some of the stories, if the reader wanted to take their interest a little further. One innovation in the books is that the author gives the modern post-code for the location of each tale, allowing it to be viewed on Google maps.

Of course, these are not scholarly works and do not need copious footnotes and references; they are to be enjoyed for the bizarre and entertaining nature of their stories, and the attractive colour photographs and old prints that accompany them. They would certainly make welcome Christmas presents for any Lancastrian or Cestrian with an interest in the strange tales and curious history of their county. – John Rimmer.