DEVIL OF A TALE


Although its fame is not quite as universal as the Loch Ness Monster or Bigfoot, the Jersey Devil can claim to be by far the senior mystery monster. Haunting the Pine Barrens, an isolated wooded area of New Jersey, the Jersey Devil is usually described as a goat-or horse-like creature, usually walking on its hind legs, with bat-like wings growing from its withers.
🔻
It has reportedly been seen since the 1600s, although most reports come from the twentieth century.

The Pine Barrens had always been an area with a bad reputation, going back to the days of the earliest European settlers, and even earlier in Native-American beliefs. The local Lenapi Indians saw it as home to a variety of spirits, among which was the M’Sing, “a deer-like creature with leathery wings or a deer being ridden by a man.” In the Colonial Era the area became a haunt for highwaymen and outlaws, and its small hamlets attracted outsiders who were despised by the more settled inhabitants of the larger towns as ‘primitive’ and only semi-human, a trope which continues even today in the racist portrayal of the ‘hillbilly’ family in The Simpsons.

In the ferment of the witchcraft persecution and the constant religious religious conflicts between various groups of colonists, rumour and accusations of evil-doing became common currency, including claims that ‘monstrous births’ were the result of consorting with demons, or being involved with devilish practices.

The history of the Jersey Devil begins here, with the legend of a witch known as ‘Mother Leeds’ whose thirteenth pregnancy resulted in the birth of a monstrous being. Either as the result of her cursing a local preacher, or her cursing the child to which she was painfully giving birth - “let this one be a devil” - her offspring was a monster with wings, claws and a horse’s head. 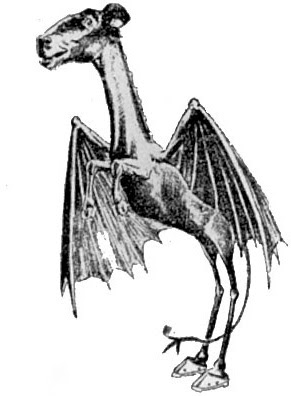 Depending on which version of the story you take, the creature either immediately flew off up the chimney into the pinewoods, or was looked after by the Leeds family for several years until killing its parents and then fleeing to the Pine Barrens, to haunt the location for centuries to come. Although no-one seems to be particularly clear about the origin of this legend, it may be linked to an actual historical incident, in New England rather than New Jersey.

Anne Hutchinson was a religious rebel who was prosecuted for heresy and banished from Boston, to take up residence in the more tolerant colony of Rhode Island, along with a number of her followers. At the time of her exile, she became pregnant for the sixteenth time, but her child was grossly deformed. Just before this one of her followers had also given birth to a severely deformed child. The general belief at the time would be that these were punishments for the women's heretical and blasphemous behaviour.

There was a real Leeds family in New Jersey, headed by a Daniel Leeds, who arrived in West Jersey (the Colony was originally divided into an East and a West section) in the 1670s, probably from the small village of Leeds in Kent, rather than its larger Yorkshire namesake. Daniel was a Quaker, and when he arrived in the New World the Quakers who had originally settled in Boston were fleeing persecution by the Puritan establishment in the Bay Colony. Some settled in Rhode Island, others moved to West Jersey and Philadelphia.

At first Daniel settled into the Quaker community in the newly founded town of Burlington, where he assisted in the building of the first Meeting House constructed from the timbers of the ship in which he sailed to the New World. He became a prominent landowner and attained the post of Surveyor General. It is at this time that the location of Leeds Point gained its name, which is an area strongly associated with tales of the Devil.

Daniel Leed’s association with the Quakers became fraught when he began publishing an Almanac of useful seasonal information for an agricultural community, along with a series of philosophical works which were intended to provide a scientific background to religious belief. As his work grew more philosophical, and he became interested in the mystical beliefs of a group of German settlers who were followers of the writings of Jacob Boehm he earned the hostility of the Quaker establishment who were unhappy with the astrological elements of his Almanac.

He got involved in a publishing war, with books, pamphlets and counter-pamphlets being produced by the various factions, in some of which Leeds was referred to as a ‘Devil’. This continued after his death, his son Titan taking on the publication of his Almanac and getting involved in a bizarre dispute with Benjamin Franklin, then making his name as a young controversialist. Franklin had his own publication, Poor Richard’s Almanac, and delighted in exposing what he saw as religious fraud. The Leeds' Almanac became a target for his barbs, jokingly linking it with necromancy and Satan by implying Titan Leeds was receiving messages from his deceased father.

But by this time the Leeds family began to fade from public attention, the American Colonies were in revolt against British rule, and Benjamin Franklin’s attention moved to other matters. The Leeds Devil story more or less died away for nearly a century. But in the nineteenth century monstrous creatures began to attract public attention again, this time from a scientific perspective rather than a religious one.

The discovery of the fossilised remains of prehistoric beasts, and the possibility of their still-living relatives, stimulated not only serious scientific speculation but a series of hoaxes. Most notorious was Richard Locke’s ‘Great Moon Hoax’ in the New York Sun, which held readers entranced with accounts of the amazing animals and semi-human creatures which had been revealed on the moon via Sir John Herschel’s wonderful new telescope set up in South Africa.

The exposure of this hoax did not discourage others, such as the ‘Cardiff Giant’ intended originally as a spoof of Christian anti-evolution fundamentalist, but eventually becoming a fairground attraction and producing a number of copies. The appearance of a Spring Heeled Jack figure in New Jersey, and newspaper reports of mysterious footprints seemed to revive the dormant story of the Leeds Devil. Now renamed the Jersey Devil it was ready for its latest appearance on the public stage, which has continued to this day. 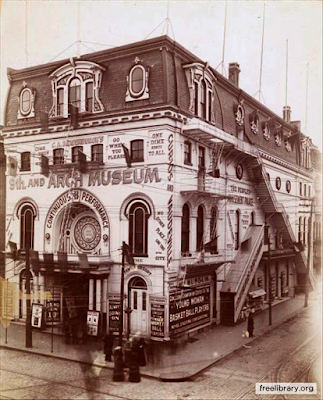 By the start of the twentieth century the story had received enough attention that Charles Brandenburgh, the proprietor of the ‘Dime Museum’ in Philadelphia thought that the Devil was just the attraction he needed to revive the fading fortunes of his establishment. The ‘Dime Museum’ was basically a theatre which staged spectacular acts and freak-shows, rather like London’s Royal Aquarium, which flourished at the same time.

Along with Norman Jeffries, the promoter of the earlier ‘Devil’s footprints’ story, they staged a hunt for the Devil. Hiring a clown from the Ringling Brother’s Circus to play the brave huntsman, they headed off into the woods in search of the monster. A few gunshots later, and a good deal of shouting and screams, a caged and shrouded figure was brought back to the Dime Museum in a wheelbarrow.

The creature that then went on show was a kangaroo, with the help of a local taxidermist who painted the creature with stripes and attached a pair of home-made wings. The hoax didn’t survive for long, it’s doubtful if many of the paying punters really thought is was the Jersey Devil, but simply enjoyed the curiosity value of it. Despite the success of the event, the Dime Museum didn’t last long after the unfortunate kangaroo had been de-winged and returned to its home in Buffalo. But by now the myth of the Jersey devil was very much alive.

The authors describe how the Devil developed as a social phenomenon throughout the twentieth century, its physical form being set partly by the appearance of the winged marsupial, partly by traditional images of devilish winged creatures, from the original legend of the monstrous creature born to ‘Mother Leeds’, and the stories of the Leed’s family’s diabolic contacts helped along by Benjamin Franklin.

The Devil is now regarded with something like patriotic pride by many New Jerseyites, being adopted as ‘Official State Monster’ by the state government (leading one to wonder how many other states have official monsters), the nickname of the local ice hockey team, being sung about by the state’s favourite son Bruce Springsteen and featuring in any number of movie and TV productions, and no doubt bringing in a significant amount of tourist income via monster hunters exploring the Pine Barrens.

Regal and Esposito conclude: “[A]ll this began in the eighteenth century because an energetic and thoughtful man wanted to write an almanac and improve the life of his neighbors”.

This is a detailed and exceptionally well-referenced account of the birth, growth, survival and triumph of a legendary monster, and one would like to see other similar phenomena examined in such detail, particularly the infamous Brentford Griffin – John Rimmer.