Jonathan Hainsworth and Christine Ward-Agius. The Escape of Jack the Ripper. Amberley Books, 2020.

Although basically the Jack the Ripper story is just another unsolved criminal case, it has always had an odd sort of link to the world of Forteana. I think think the main reason for this is because of the culture of the era in which the Ripper’s murders took place.
🔻
The killings (at least the five now widely accepted ‘canonical’ ones) took place in 1888. This was two years after the publication of R. L. Stevenson’s novel, Dr Jekyll and Mr Hyde, and two years before Oscar Wilde’s Portrait of Dorian Grey. And just a few years later we saw the publication of Dracula. It was also the years when Sigmund Freud was developing his own ideas of the subject of schizophrenia.
The idea of a deranged killer, slaughtering prostitutes in the dangerous slums of London’s East End by night, living as a respectable gentleman by day clearly resonated with ideas that were very much in the air at that time.

Add in the stories of Spring Heel Jack, which still had currency at that time, especially in the sensational ‘penny dreadfuls’, and you have the perfect combination of psychological fear and apparent supernatural ability. The image of a cloaked figure disappearing mysteriously into the swirling, smoky fog has proved to be a very powerful one.

On top of this, there is the question of the very existence of ‘Jack the Ripper’. Over the years the number of murders attributed to him has been gradually reducing. At least four other East End murders have been claimed as his work, and from time to time one or other of the ‘canonical’ murders have been subjected to sceptical review.

A number of researchers have suggested that there was no actual ‘Jack the Ripper’. A former murder squad detective claimed that the figure existed only in the imagination of the writer of an anonymous letter from an individual claiming to be the Ripper – a letter which is almost universally accepted as fake, but which provided the stimulus for the sensationalist press of the time to build a terrify serial killer narrative.

A number of other writers have also suggested that the figure was basically a media myth, perhaps helped along by elements in the Metropolitan Police itself, and social historians rather than ‘Ripperologists’ are increasingly moving to this view. 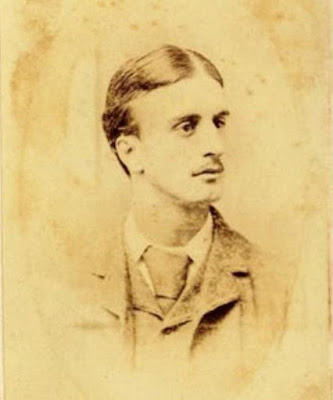 However the authors of this book do not subscribe to the idea. They are certain that the Ripper was one individual and they are clear who it is. It is not going to be a spoiler for anyone contemplating buying this book if I name him now, because the authors themselves do so in the first few pages. They identify the barrister and cricketer Montague Druitt  [left] as the Ripper.

Druitt has long been one of the favourite candidates for the role. He committed suicide by drowning shortly after the last of the canonical Ripper murders, and there was a great deal of contemporary gossip which seemed to identify him as the culprit. A senior police officer involved in the case named him, and the MP for his home town in Dorset described the killer, without mentioning a name, in terms which exactly fitted Druitt’s circumstances.

This is the premise with which this book begins, and readers seeking the argument against this identification will need to look elsewhere. The bulk of this book is an investigation into the way in which the Druitt family, their social and professional acquaintances, and a variety of ‘establishment’ figures managed to prevent the truth about Druitt been exposed to a wider public. This certainly seems a more plausible conspiracy theory than the so-called ‘Royal Conspiracy’.

The book describes how Druitt’s family had him incarcerated for a while in an asylum near Paris, suffering from “spasmodic homicidal mania”. The asylum staff were briefed in advance that as part of this mania he would confess to crimes identical to the Ripper killings, but to ignore this as it was a symptom of his condition. Druitt’s family was wealthy and the asylum officials seemed willing to go along with their explanation, but the fuller story was apparently leaked by a member of the asylum staff and it appeared in a Philadelphia newspaper in 1889.

I doubt that this book will settle the question once and for all - Hainsworth’s original book identifying Druitt certainly didn’t – but it presents better evidence for its claims than many other Ripper books. Perhaps more importantly it gives a dramatic insight into the social and political milieu in which Druitt could have committed his murders, yet been protected from their consequences until his suicide. It certainly demonstrated just how widely his responsibility for the murders was assumed and commented on by his contemporaries.

If there actually was a Jack the Ripper, this book strengthens the case for Druitt being that individual.