THE TROUBLED WORLD OF ISAAC NEWTON

One of Isaac Newton’s lesser-know achievements must be acquiring one of the largest library fines in British history. A book he borrowed from Trinity College Library before 1667, found in Newton’s personal library in 1943 and returned to the College. At the time it was borrowed there was a fine of 2s.6d. (12½p.) per week for books returned later than two weeks. By my calculations that is an overdue charge of almost £1800, not allowing for any inflation in over 275 years!
🔻
That gives you perhaps some of the tenor of this book. It is not an academic biography, nor is it an iconoclastic demolition of Newton’s career and character like some titles recently reviewed in Magonia. [1]. It is a generally sympathetic account of Newton’s life, emphasising how, even from childhood, he was isolated from much human contact. The rather sad portrait chosen for the book jacket gives a good impression of the character described within.
Born to an already widowed mother, he was separated from her when she re-married and moved to her new husband’s home, leaving the child with his grandmother. His early years were spent during the uncertainly of the Civil War and Protectorate periods, and his life at the family farm with his grandmother seem to have been lonely and isolated, largely neglected by other members of his family, including his mother. Little is know of his early education, but his uncle, rector of a local parish, seems to have been instrumental in obtaining him a place at Cambridge.
Beginning formal education at the age of 12, at Grantham Free Grammar School (‘free’ only to residents of Grantham), he was taken on as a lodger by the local apothecary, William Clarke. This may have been instrumental in defining the course of Newton’s life, as the apothecary owned a considerable library, with books on medicine, astronomy and alchemy available for the young man to read, including titles by Descartes and Galileo. The Grantham school also had a substantial library of theological works, largely from a Puritan perspective, which suited Newton’s temperament, if not always in line with his own religious views.
However his mother removed Newton from the Grammar school, feeling that he was now educated enough to take over managing the family farm, and probably still regretting the fees she had to pay as a non-Grantham resident. Fortunately the headmaster, recognising Newton’s abilities, offered to waive the fees, and he resumed his studies, and his residence with the Clarke family. Perhaps through the influence of one of Clarke’s relatives Newton was offered a position at Trinity College as a ‘sizar’, virtually a servant to wealthier students, but giving him access to the facilities of the College.
One of the issues that hindered Newton’s formal career at Cambridge was his reluctance to take Holy Orders. Religiously and philosophically he was an Arainist, his own reading of Biblical texts and the writing of the church Fathers and other theologians, he was unable to accept the idea of the Trinity, the unity of God, Christ and the Holy Spirit. However in the era of religious conflict in which he lived he was unable to openly espouse such a view in England. He had arranged for a paper expressing Arian ideas to be published in Latin in France, but as it was about to be sent to press he stopped its publication. Nothing of his religious work was published until after his death. Similarly, presumably through fear of the problems it might cause, he published nothing of his chemical and alchemical work.
It was because his career in Cambridge seemed to be stalled, friends arranged for him to be given the role of Warden of the Royal Mint. Traditionally this had been a sinecure, and it was thought that this would give Newton a secure position where he could continue his work in London. However, Newton, given the position, began to work seriously at the mint. This was at a time of currency reform, with the establishment of institutions like the Bank of England. One of the problems the government faced was ‘coiners’ clipping the edges of silver coins and melting the scraps down to forge new coins. 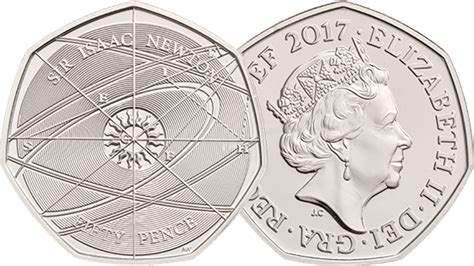 An attempt had been made to issue a new clip-proof currency, by this was being frustrated by corruption and mismanagement at the Mint. Newton rapidly took control of the process, and completely replaced the silver currency in just two years. His knowledge of metals, perhaps influenced by his alchemical works, showed him that adding a small amount of copper to the silver would make the coins harder, and more difficult to clip. He also introduced the ‘milled’ edge to silver coins which has survived to this day.
Newton was clearly what we would now describe as a ‘loner’, right from his disrupted childhood. He seemed to have no really close friends, never married, and indeed seemed to be almost asexual. Convinced, justifiably, of his own genius, he made an uncomfortable ally and a dangerous enemy. This book does not concentrate too much on that side of his character, concentrating mostly on his scientific and philosophical work, whilst giving insight into the conflicts and frustrations that shaped the darker side of his life.
But there is more to this book than a straightforward biography of Newton, as the title implies. Alongside the description of the subject’s rise to global fame, there are accounts of the political, social and religious developments in England and in Europe which shaped the world Newton was born into, an examination of his predecessors who provided the foundation of his own studies, and descriptions of contemporary individuals and events which shaped his life, influenced his work, and defined his place in history.
This is an interesting, easily readable account, which gives a rounded insight into the lonely life of one of history’s greatest thinkers, placing it in the historical context of the era in which he lived. – John Rimmer.