Lisa Morton. Calling the Spirits; a History of Séances. Reaktion Books, 2020.
The desire to communicate with the dead has been a human obsession for millennia. Lisa Morton demonstrates this by beginning her review of the séance phenomenon, not as one might expect in the nineteenth century with the Fox sisters and the birth of Spiritualism, but by going back to examine the actions and beliefs of ‘necromancers’ from earlier millennia.
🔻
She looks at attempted divination from the souls of the dead, dating back to Pharaonic Egypt and Classical Greece and Rome. The British Museum holds a tablet from Mesopotamia, which contains an incantation for summoning a spirit through a skull doused in a potion made from animal parts. Even in this earlier period there was a strong dichotomy in the way in which society viewed the activities of the necromancers, attacking them as agents of evil, at the same time as seeking their advice on important issues. There were critics, as virulent as any ‘skeptic’ today. Classical Rome seemed to employ some particularly violent and horrific practices, which some writers denounced as importing alien influences into the Roman religion, but were also used by Emperors to plot against their enemies.
The spread of Christianity meant that the earlier forms of communication with the dead were attacked as the work of demons, but even in the Bible and the lives of the saints there were numerous examples of communication with the dead, or even raising them physically, in order to deliver a message to the faithful, or for their spirit to be received into Heaven.
It’s perhaps debatable how much these kinds of contact can really be called ‘séances’, especially when dealing with the kinds of practices described in mediaeval grimoires, and even more so when discussing the practices of figures like John Dee and Cagliostro. However this historical discussion does demonstrate the widespread nature of attempted contact with the dead, historically and socially.
The real meat of the book begins in Chapter Four, with a description of the birth of Spiritualism, with the rapping contacts of the Fox sisters. From the first tappings in March 1848 it took just four years for the creation of a US-wide Spiritualist movement with its own newspaper, The Spiritual Telegraph. That title is significant, as the proselytising of the Fox sisters and their growing bands of followers was happening at the same time as the new electric telegraph was sending messages across and between continents, at such a speed that to many people it must have seemed as supernatural is if aided by spiritual forces.
From its very beginning the world of the Spiritualists was dogged by accusations of fraud. Morton cites as an example the Davenport brothers, two of the first male mediums. They came to prominence in the 1850s, with séances based around a ‘spirit cabinet’ in which they were both supposedly imprisoned. While in the cabinet a variety of phenomena would take place in the séance room, including the playing of musical instruments and the materialisation of hands. 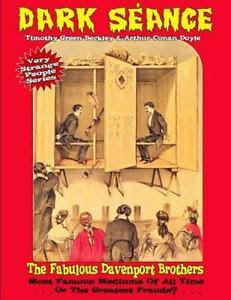 Basically they were a conjuring and escape act, and their methods were exposed by John Maskelyn and his associate Alfred Cooke, who toured with their own show, reproducing the Davenports’ séance phenomena. Although this led to many people doubting the Davenport's genuineness – one of their performances in Liverpool led to a riot in which their cabinet was destroyed by an angry audience and they fled the city - they still had many followers. Interestingly, Morton suggests that at least one of the brothers, Ira, although admitting that many of their phenomena were fraudulent, appeared to also be a sincere Spiritualist in his own beliefs.
One significant point that the author raises is the social context of the early years of Spiritualism. The spiritual movement seemed to provide a pathway for socially marginalised individuals to break out from the stifling oppression of nineteenth century society. Notably most of the earliest mediums who gained a wider fame were women, and usually working-class women. The spiritualist movement in general seemed allied with the general movement towards female emancipation and suffrage, and other progressive causes of the time, from anti-slavery to the temperance movement.
It is possible to understand why many prominent scientist were proponents of Spiritualism and spiritualist séances, as the idea of mental communication seemed in tune with the pioneering spirit of that age. Scientific developments and discoveries were proceeding at such a pace that concepts like telepathy or even post-mortem communication did not seem as unlikely as they do today. Discoveries such as radioactivity and x-rays were, literally, opening up new dimension of scientific knowledge.
What is difficult to understand however is the acceptance, by the same prominent figures, of séance phenomena which seemed little more than parlour tricks and theatrical performances. Did none of the early scientific proponents stop to ask themselves why the first thing that a soul that had passed on to a new and presumably better life would do, on being able to communicate with those left behind would be to play an accordion, levitate a vase of flowers or produce a large quantity of white muslin from various bodily orifices?
Perhaps what finished off most of the parlour games antics of the early spiritual mediums, was the Great War. The massive slaughter this entailed produced a generation that sought direct messages from those family members who had been snatched from them. The séances that brought messages from the war dead did not need rappings, floating trumpets or random physical phenomena. They were to allow the voice of the departed to speak directly through the medium’s own voce.
The séances of the war years and the nineteen-twenties moved towards trance mediumship, where the departed spirit gave its message to the medium, who then relayed it to the listeners, or the spirit took direct control of the medium's vocal organs and spoke directly to the listener in was was assumed to be the spirit's own voice.
Often the spirits giving the messages to the medium would be ‘guides’ who would pass on messages from other spirits. These guides were often Indian mystics, children or shamanistic Native American figures. The author suggests that this form of mediumship transformed in the 1970s into the phenomenon of ‘channeling’. She points out that channeling does not usually produce messages which are aimed at one one individual, but are generalised mystical teachings from ‘past masters’, who may be real historical figures, or exotic characters drawn presumably from the mind of the channeler..
The final chapters look at the way mediumship and ‘calling of the spirits’ has fractured into a number of pathways, from sensationalist ‘ghost hunter’ investigations, to ‘crime fighting’ psychics and individuals such as Doris Stokes channeling the music of Beethoven and Liszt, onto what she describes as “superstar psychics” with their own TV programmes and theatre and stadium shows.
In her last chapter Lisa Morton asks “Why do we need the séance?” and provides a number of answers. Carl Jung described the idea of personal immortality as “a psychic phenomenon that is disseminated over the whole earth", and even the sceptic Carl Sagan wrote “Plainly there’s something in me that’s ready to believe in life after death”, adding that this is “not in the least bit interested in whether there’s any sober evidence for it.”
Lisa Morton is clearly sceptical of most of the claims made for séances and the phenomena of Spiritualism, but presents the claims of those involved in an even-handed manner, whilst also presenting the voices of those, throughout history, who have found no evidence for the reality of any form of post-mortem communication.
The fascinating history of séances is filled with mystery, deception, self-deception, genuine belief, scientific enquiry and personal transformation, which is well described in this extremely interesting and readable account.