Unlike most books on this topic, this one comes up with no new theories on the identity of the ‘Ripper’, and makes it pretty clear that no one has, or ever likely will, identify the killer. The author has little faith that any of the multiple culprits put forward by the hundreds of people who have offered the ‘solution’ to the murder bear any great weight of evidence.
🔻
Also, unusually it expands the list of the Ripper’s victims from the now generally accepted ‘cononical’ five. The author includes the murder of Martha Tabram, killed on 7th August 1888, twenty-four days before the killing of Mary Ann Nichols, generally accepted as the first of the Ripper victims. He also extends the killers reach to a seventh victim; Alice McKenzie, slaughtered on 17th July 1889, eight months after the particularly gruesome killing of Mary Jane Kelley in November of the previous year.
No doubt ‘Ripperologists’ will find much to debate and dispute about including these killings into the Ripper timeline, but that is not the theme of this book. It is much more a study of the social conditions surrounding the murders, and the ways in which people with differing motives reacted to them, and particularly the many letters, either purporting to be from the Ripper, or claiming to have information on his identity which were sent to the police and other agencies.
Trow firmly places the responsibility for the creation of ‘Jack the Ripper’ onto Fleet Street, The first confessional letter received by the police was addressed to the police commissioner, Sir Charles Warren and was posted on 24th September, 1888. It showed drawings of a coffin and a knife, but was unsigned.
The subsequent letter which sparked off the storm was sent to the Central News Agency, three days later. This was the famous ‘Dear Boss’ letter, which first introduced the name ‘Jack the Ripper’ to the public. It included the sentence “I am down on whores and I shant [sic] quit ripping them till I do get buckled.” which became a recurring theme in the many letters that followed. The police were first inclined to regard this as a genuine letter from the killer, taunting the police’s lack of success in finding him. As a result they published facsimiles of it in the hope that someone might recognise the writing.
However there was another letter before the September 27 ‘Dear Boss’ letter, but which was never published. In tone it was very similar to the published letter, also signed off with ‘Jack the Ripper’, was address ‘Dear Boss’ and included the phrase “shant [sic, again] stop until I get buckled”. This letter was also sent to Sir Charles Warren, who was a public figure, and whoss name had been linked with the enquiry in newspaper reports.
This rather raised the question as why the second ‘Dear Boss’ letter was sent to the Central News Agency, an organisation whose existence was probably unknown to the vast majority of newspaper readers. The general assumption was that this was a hoax by a journalist seeking to encourage a sense of panic to sell newspapers. In that it certainly succeeded. It is likely that, as a reporter, the writer may have had police contacts who showed him the original, unpublished ‘Dear Boss’ letter.
There now followed a flood of letters, to the Metropolitan Police, the City of London Police, newspapers and police forces across the country. Many of these have been subsequently lost, stolen or destroyed from archives, but enough remain to give a picture of the way the Ripper story spread and mutated as the murders continued, and beyond.
One of the recurring themes in the letters was the writers taunting the police on their alleged inefficiency, and announcing when they were going to attack another victim: “Dear Boss, I thought I would let you know jest [sic] to see if you could be clever enough to stop me. ... I have spotted one or two near kingston station”. Notably, even though this letter was sent to the editor of the Surrey Comet newspaper, it followed the “Dear Boss” format of the original published letter. Other writers used their letters to victoriously enjoy the bloodthirsty nature of the crimes, writing as Jack and describing in nauseating detail how they would treat their ‘next victim’.
Many other writers offered the police advice on how they should go about catching the killer, or identifying individuals they suspected of the crimes. One writer, using the alias ‘Revelation’ claimed to have the psychic powers to catch the killer. Another writer’s children came up with the name and address of someone they suspected: “Tom Totson of 20 Wurt Street, WC.” No such street existed. They claimed they obtained this information through ‘table-wrapping’.
Other letters meaning to be helpful to the police presented information supposedly gained through psychic means. A ‘mesmerist’ offered his services to catch the monster, and people offered information obtained through dreams, including a Reverend Harrison who dreamt that the Ripper was actually two people, living at the same address. A writer from Italy suggested that the murderer might be a Buddhist, on what basis was not stated. 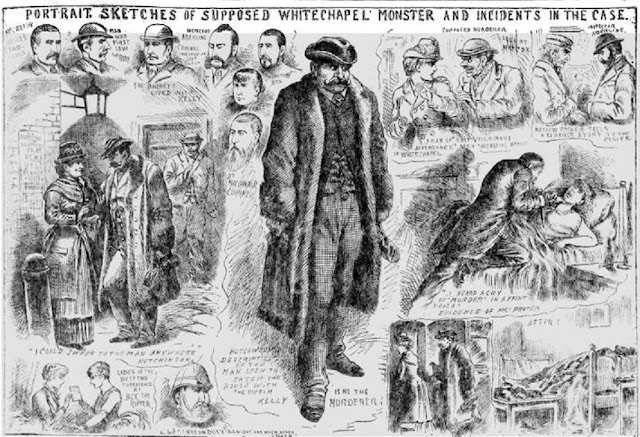 Many of the accusatory letters claimed that the culprit was a foreigner. The notorious Illustrated Police News [above] carried an impression of a witness’s description of a man seen talking to the victim Mary Kelly. He is depicted as a caricature villain, undoubtedly ‘un-English’ complete with curly moustache and astrakhan coat. Other letters pointed the finger at Irish villains (this was at the time of a wave of Fenian bombings) and Italian revolutionaries.
Parts of  London's East End at this period were over 90% Jewish, following an influx of Jews fleeing the pogroms in Russia and Eastern Europe, and a number of letters made allegations against individual Jews, most notably the so-called ‘Leather Apron’. This was the nickname of a Jewish butcher, who was questioned by police after he was named in a newspaper. A blooded leather apron was found near the site of one of the killings, alongside a scrawled graffito on a wall saying “The Jewes are the men that will not be blamed for nothing”, a sentence so convoluted in its double-negatives that is virtually impossible to determine whether it is accusing or exonerating “The Jewes”.
One researcher suggested that the message was written by a French speaker, and the word ‘Jewes’ is actually “Juives”. The inscription was washed away immediately on the orders of the Police Commissioner, who feared it might provoke an anti-Semitic backlash, but a hand-drawn copy suggests that this might be a possibility.
The author expands his study from the messages associated to the Ripper murders, to look at similar messages, both confessional and accusatory, that have been made following several other notorious series of killings, including the Bundy and ‘Zodiac’ killings in the USA. He also examines how the police investigation into the ‘Yorkshire Ripper’ murders by Peter Sutcliffe in the 1980s were derailed by messages purporting to come from ‘the Ripper’, But after involving a great amount of police time and expense, they were found to be fake. The culprit was not discovered until 2006, through a chance DNA match. He received an eight year sentence, of which he served three. There is no record that any of the nineteenth century writers of the fake Jack the Ripper letters, were ever imprisoned, even when their identities became know to the police.
Of the hundreds of letters received by police, newspapers and private individuals, were any genuinely from the Ripper himself? Trow suggest that perhaps one, a letter sent to George Lusk, the Chairman of a ‘vigilance committee’ in the Whitechapel area. Headed ‘From Hell’ the original letter, and a copy made at the time, are now missing from the Scotland Yard archives, as is a great deal of other material relating to the murders. This of course has provided plentiful ammunition for conspiracy theorists.
Although at times it is sometimes difficult to follow the complex sequence of the letters and their subsequent investigations – a time-line appendix would have been helpful – this is a book that presents an intriguing view of the most famous serial killer case in history, and an insight into the era that created both the killings, and the subsequent myth-making. – John Rimmer