Martin Shough, with Wim van Utrecht. Redemption of the Damned, Volume 2: Sea and Space Phenomena. Anomalist Books, 2021.
Redemption of the Damned seems an odd title for a book that subjects the strange incidents recorded in the books of Charles Fort to a detailed, scientific re-examination. What exactly is being ‘redeemed’ here? In his Forward to this volume, bibliographer and Fortean researcher George Eberhart says that “Charles Fort has not aged well”
🔻
He claims that “The Book of the Damned is a difficult read, riddled with sprawling and oddly constructed paragraphs, abrupt sentence fragments and an exuberance of dashes.” True enough, and I’ve said much the same every time I reviewed his work, but more importantly Eberhart points out that Fort seemed far more interested in damning science itself. His “outlandish hypotheses”, which he immediately dismisses, such as the 'Celestial Sargasso Sea', leads Eberhart to regard Forteanism, as I did in a review of one of his titles, to be a forerunner of the rather pointless philosophy of post-modernism.
In reviewing the first volume of Shough and van Utrecht’s survey of Fort’s data, [LINK] their researching of individual cases must not be regarded as a ‘re-evaluation’ of Fort’s accounts, as Fort himself did no evaluation or research into the incidents he recorded. They were to him simply a source of anomalous observations that permitted him to spin his claim that ‘science’ was methodically ignoring anything that might disturb its world.
This was why Fort called his first book The Book of the Damned, as he claimed the data in it had been damned by orthodox science. But from the beginning it is clear this was not the case, as Fort himself showed, being keen to demonstrate that all the data in his books came from established scientific sources. And in their research, the authors discovered that in many cases ‘science’ did a pretty good job in both recording and analysing the data that Fort captured for his own use.
They point out that many of the cases they examined in Volume I remain unexplained despite their intense efforts, suggesting that in most cases this is down to the lack of information that is available to them from contemporary sources. Now researchers have almost fingertip access to a vastly greater source of data than Fort could ever have imagined in his endless forays through the forgotten acres of library files.
This result of this research is that a great many of the datum that Fort presents do not represent any previously unknown phenomena or challenge any area of established scientific knowledge. It also suggests that Fort was often sloppy in reading and transcribing from scientific papers. But on the other hand it also reveals that many contemporary sources, including ‘respectable’ scientific journals had their own issues in the accurate reporting and recording of even quite significant details of reports. One case examined here becomes confused because although the initial reports of a ship’s longitudinal position give it as 170 degrees, one source gives it as degrees west, another as degrees east, a difference of about 1000 miles [1600km].
The reports considered in this volume cover two widely different sets of phenomena ‘sea’ and ‘space’. The authors point out that these are linked by the way in which they are analysed, in that a number of records need to be analysed collectively to provide a context, where as in the first volume, ‘Arial Phenomena’ each individual case could be analysed in detail.
Sections such as ‘Worlds Which Never Were’ look at multiple reports of the apparent detection of planetary bodies orbiting between Mercury and the Sun, and potential satellites of Venus. These have been made by many astronomers, amateur and professional, practically from the first telescopic observations until the late nineteenth century. But by the time Fort was rediscovering the earlier reports, modern data had dried up, leaving the earlier reports in obscurity until, fuelled by Fort’s books, in the 1940s and 50s the burgeoning UFO phenomenon brought them into the light again.
Other chapters examine reports of objects seen transiting the sun and the moon and strange shadows on the surface of the satellite, which Fort likened to giant crows. The authors look at the original sources for these reports, and discover yet again how careless Fort was sometime over dates. When taking allowances for this, they proffer a number of possible suggestions to explain the anomalies, but have to conclude that for many, “given the information we’ve got, we’re stumped”.
One set of anomalous lunar phenomena which has continued into the twentieth century and beyond, is anomalous lights on the moon. These have been so prevalent and consistently reported that they have acquired their own three-letter acronym – TLP, Transient Lunar Phenomena. Early accounts of these came from the great astronomer William Herschel, who in 1787 reported seeing ‘volcanos’ in the dark side of the moon, and again in 1790 saw “an actual eruption of fire, or luminous matter.”
Conventional astronomy would say that any geological activity on the moon would have ceased at the very latest tens of millions of years ago. Nevertheless reports from careful and responsible observers continued, and as late as 1953 a TLP was photographed on the moon. The photograph, reproduced in the book, shows a distinctive bright light on the terminator of the moon’s shadow, and has tentatively been identified as a meteorite strike.
Other suggestions offered indicate a connection between TLPs and solar phenomena, with some apparent link between observations and extreme aurora activity. In concluding this section Shough and van Utrecht comment that Fort’s collecting of a large number of stories, “however uncritically”, in one place, may have kept the topic in public awareness.
It seems a leap from astronomical anomalies to strange tales of the sea, but many of the mysterious maritime oddities that Fort recorded involved fireballs and terrifying luminous apparitions which were perhaps earthly manifestations of the sort atmospheric and astronomical phenomena surveyed in the first volume. 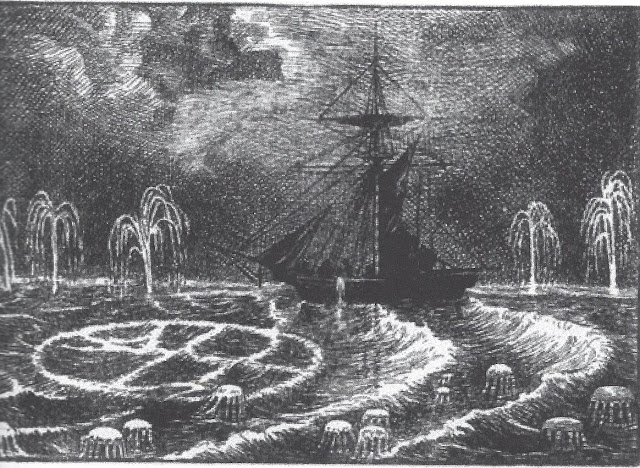 Plate from La Terre et le Ciel (1893) showing luminous phenomena
recorded off the coast of Florida, September 1851.
One luminous oceanic mystery has been seen so often that there can be no doubt of its physical reality, is the appearance of great luminous circles and other patterns on, below or even above the surface of the ocean, surrounding ships at sea. These seem to occur in particular locations, most notably the Indian Ocean, but also in the Caribbean.
The most likely explanation is that they are the result of vibrations from ships’ engines disturbing bioluminescent organisms, although it is hard to imagine how this might explain such ‘wheels’ several meters above the surface. Although there are one or two examples for the age of sail, most of the reports come from observations from steam-powered craft. The advent of diesel engines seems to have resulted in a decline in such observations.
The authors compare the rise and fall of these wheels with the ‘will-o’the wisps’ which seemed to be everywhere in the nineteenth century but are seldom heard from today, presumably the result of the draining of much of the marshy land where they flourished. Fort’s promotion of this phenomenon the authors see as encouraging a tradition of collecting anomalous data, later followed by Corlis and others.
I must remark that Magonia’s Editor Emeritus John Harney, while working at the Meteorological Office was involved in editing The Marine Observer, a sober scientific journal publishing reports from vessels across the globe. As well as weather observations it also printed many accounts of such luminous wheels and other metrological anomalies. Fortunately John never promoted himself as part of the ‘UK Government’s Fortean Project’. The Marine Observer closed in 2003. (Click title for link)
Other marine reports are descriptions of fireball type phenomena, both descending into and emerging from the sea. One case they look at in detail is a case from March, 1887. The Dutch ship J.P.A. on a journey from Rotterdam to New York was nearly struck by two ‘meteors’ one black, one illuminated, which into the sea close by, causing a wave to break over the vessel. The crew reported a “suffocating atmosphere” which was uncomfortably warm, but immediately afterwards the deck of the ship was coverer in ice.
None of this report makes any sense, meteorologically or astronomically, and in search of an explanation the authors look at increasingly improbable coincidences and events. By the time they get to speculation about rogue unmanned balloons containing fireworks or bombs, they wisely conclude, “At this point it is time to admit failure. If we are to preserve the phenomenon as reported without resorting to exotic hypotheses, we are reduced to ever more far-fetched speculations.”
In fact this conclusion is far from a failure, and reveals the strength of the analyses that Shough and von Utrecht have presented. Their aim in reviewing Fort’s cases has been to determine whether any of them provide good evidence of any phenomenon or force which is presently unknown to science.
To do this they have scrutinised a vast number of records from many sources. One of the great strength of this book is its reproductions of the original documentation for most of the cases described. These range from newspaper reports, magazine articles and papers in scientific journals. To this they have added later documentation such as weather maps and records from around the world which has helped to clarify the possible sources of the various phenomena.
They have “preserved the phenomenon” by not assuming that the original reports were seriously flawed, or that the observers were incompetent, unless they have been able to provide clear evidence that was the case, which has seldom been so. They have allowed the original observers and recorders the courtesy of taking their reports seriously. And when they have not been able to provide a plausible scientific explanation for a strange event, they have had the confidence to say so clearly.
This is an essential book for the serious researcher, and demonstrates clearly that there is no contradiction whatsoever in being both a Fortean and a sceptic.