Erik Butler, The Devil and his Advocates, Reaktion Books, 2021.

Let’s be honest, Satan has had a bad press. If he’s not luring confused people into his net to siphon off their immortal souls just to give two fingers up to the great Enemy, God, he’s shown as a truly monstrous character with goaty face and bat-like wings. Sometimes you wonder what the attraction is. In this book author Erik Butler takes on the usual assumptions about the Prince of Darkness and Despoiler of Souls, and places him in a much wider, more questioning and less hysterical context than perhaps one is used to. This is long overdue.
🔻
Told with a wry wit and an easy, but never facetious style, Butler’s book takes us through the vexed history of Satan, revealing at every step the sheer usefulness of the grim archetype of evil to humanity. And, in fact, the invaluable role he played in the delineation of God himself…
In antiquity we see him as pretty much joint tormentor of Job, with God – whose sadism often matches or even exceeds Satan’s own, although of course it would have been death to say so for many centuries. In fact, Satan and God were an effective team, with the former acting as challenger – the actual Devil advocate – to God, as it were the latter’s sounding board.
The Devil – or ‘the satan’ - is usually presented, back in the mists of time, as someone ‘whose role is to drive home a profound lesson’. As Butler notes pithily about the whole sorry Job saga: ‘In no way does the satan seek to promote evil for evil’s sake. Instead, he visits trials upon God’s model servant in order to test his mettle. In the process it becomes clear what 'good' and 'evil' really mean.’
But as with all the iconic stories of the personifications of good and evil the most basic and enduring truths are about what they show about humanity.
As Butler points out: "People will seek someone to blame when calamity afflicts their community, and they deem bad luck the manifestation of supernatural will: payback for wrongs committed."
A great many innocent women – and men, children and even animals – tortured and burned as ‘witches’ in times for famine and pestilence would recognise that most vicious of truths. It’s humanity that ‘are inclined to find fault with others and blame them for what they themselves fail to understand; in so doing, they inflict further wrongs. Error is their native element, rampant with hypocritical cruelty.’
And now the mind slides inevitably to the Holocaust, when – whipped up to a frenzy by a madman – a whole previously civilised nation believed that Jews were responsible for their post First World War humiliations and all their current ills. Who needs a horned Devil when you have fake news to create a hell on Earth?
Yet this book is considerably subtler and more intelligent than the most simplistic lines, taking taking us along an illuminating historical path right up to today. But even with the usual theological scenarios, Butler doesn’t shy away from addressing the difficulties, for example, with Jesus’ own relationship with Satan – whom the Bible presents as a sort of souped-up Pharisee, tempting him. He writes, ‘The Saviour and the Tempter occupy the same symbolic space… the trial to which Satan subjects Jesus in the wilderness confirms the role and resolve of this other 'son of God'.’
Christians, at least in their very first manifestation, are revealed in all their flesh-hating masochism, delighting "in the prospect of the only world they might ever know going up in flames".
Butler takes us through the rise of the concept of hell as an actual location – surprisingly late, historically – and the way uncomfortable facts of life were absorbed into religion. "Glad tidings do not exempt the faithful from hardship. There is still a test to pass: 'Satan hath desired to have you, to sift you as wheat.'" Concepts like that, constantly rammed down the throats of the flock, would certainly keep you on your toes, but also pre-empt any blaming of God for disasters. It’s not God. It’s the Devil, silly.
By medieval times the concept of the Devil was utterly contradictory. While being an Adversary who promoted fear of God through his own reign of terror, he was also often downright risible – as often portrayed in the Mystery Plays, when he crosses the line into broad farce. One could say, however, that this was simply the well-known psychological defence in effect: by laughing at your terrors you can feel, however briefly, that you’re taming them.

Usually, though, calling out the Devil’s advocates was no laughing matter. Butler cites Martin Luther’s typically no-nonsense diatribe: "Did not Christ call his adversaries a generation of vipers[…]? And did not Paul refer to his opponents as dogs… and sons of the Devil? Who could have been more biting than the prophets? …"
But just in case you were in any doubt where this was going, Luther hits you with: "You may have three or four learned and excellent cardinals, but what are they among so many [others]? The Roman curia deserves not you but Satan himself. What under heaven is more pestilent, hateful and corrupt?"
(Come on, Martin, don’t sit on the fence - what do you really think about the Catholic Church?)
Meanwhile, it probably goes without saying that the papal nuncio referred to Luther in turn as ‘this Satan’. (In character, if not degree, this is somewhat reminiscent of the trading of insults between the pro-Trump and anti-Trump factions. Both are known to call each other ‘the haters’.)
We are taken through the bitter horrors of the Reformation – "the Reformation was heaven-sent for Satan" - the Counter-Reformation and various religious wars, none of which show humanity in a good light, and none of which prove the existence of a Devil who is separate from humanity, though as an archetype he remained useful.
Obviously in any book about Satan you have to include John Milton, the dour Puritan poet whose – arguable – masterpiece, Paradise Lost, famously setting out to ‘justify the ways of God to Man’ only succeeded in bestowing an aura of humanity to Satan. Butler points out, with some forensic precision, that the great Christian epic actually "derives ore from heathen feats of strength than from Christian humility" and is woven from strands of pagan eloquence.
Equally obviously such a book must feature the whole Pacts with the Devil thing, inevitably focusing on the doomed Faust(us), although Marlowe’s treatment – still very much based on a more medieval mindset - is shown for what it is: materialistic and limited: "The ill-starred hero’s horizons do not reach beyond the earth; indeed, they barely extend beyond his physical appetites. 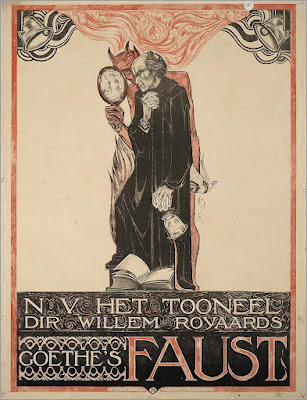 In contrast Goethe’s Faust seeks to leave all he knows behind, and with it the pettiness of human existence in general…. a kind of atheistic communion." While it’s easy to sneer at Marlowe’s Faustus, Goethe’s hero is much more appealing – and actually, in the most technical sense, not a Satanist at all, but a Luciferian, one whose intellectual ambition challenges the old norms, including those of religion.
But Butler’s assessment is not quite so skin-deep. Discussing the role of Mephistopheles in the iconic pact stories, he notes that "If this Devil has anything to prove, it’s that the world is neither good nor bad, and even the wisest man is a fool. Mephistopheles is the only member of the heavenly host to have observed just how tiresome affairs are on earth, and he alone recognizes the vanity of Faust’s every presumption."
So there, in a nutshell, we have it – the real reason for the pact is not merely vanity, but, by implication, sheer boredom at the tiresomeness of life on earth.
Butler moves remorselessly on through the bywords for excess and evil, including the Marquis de Sade, who "exhausts himself trying to multiply transgression to infinite dimensions" and Gilles de Rais, who ends up howling with grief at his own crimes and sins. The author remarks sagely, "Nothing of the sort is even thinkable in the godless and hypocritical modern world. Where’s Satan when you need him?"
In the headlong rush through the major voices for the great alternative view, obviously we pause at Nietzsche, who, as his commentator, Ernst Bertram noted, offered "the strongest thesis of an advocatus diaboli to date", evil itself being of divine origin, and God himself taking the form of the snake in the Garden of Eden.
Poets and even heavy metal musicians get their moment in the spotlight here, though the chapter on the ‘Satanic symphony’ is a great deal subtler than many might expect, as is the inevitable nod to the Nazis – though they only appear in the context of other names-to-be-reckoned with, such as Thomas Mann and his own version of Doctor Faustus (1947), which "enlists Romantic tradition to draw parallels between personal misfortune and worldwide disaster".
Butler ends by reinforcing his central thesis that "Satan has never caused anything. At most he has helped those already inclined to wickedness accomplish ignoble aims – in order to assure the damnation they merit…. Human beings are always at fault."
This is a big cautionary tale, not only for the atheists who think lack of a Lord gives them carte blanche to commit grave crimes, or conversely the believer who cites God as a reason for utter sadism, but also for would-be Satanists. Butler dismisses them as "the occasional idiot".