Matt Wingett. Conan Doyle and the Mysterious World of Light. Life is Amazing Publishers, 2020.
People frequently comment, when discussing Conan Doyle’s belief in the supernatural, how could someone who created the ultra-logical character of Sherlock Holmes also defend such a clearly fraudulent phenomenon as the Cottingley fairies. This book goes a good way to answer that question, but leaves us at a vital moment and with many questions.
🔻
Readers who know Doyle only from the Sherlock Holmes stories do not realise that a great deal of his other fiction had a strong supernatural content. In his introduction, Matt Wingett points to such tales as Lot 249, a story which more or less started the ‘cursed mummy’ genre of horror fiction.
Doyle’s interest in Spiritualism and the supernatural began in the same year as the first Holmes story was published in Strand magazine – 1887. While working as a doctor in Portsmouth, he attended a ‘table-turning’ séance with a friend. He was unimpressed by his first experience, but subsequent events changed his views. After receiving what he thought was a significant literary message during a séance, he wrote a letter to Light magazine, the principle Spiritualist journal of the day, and still being published.
After this letter was published Doyle became a regular correspondent and contributor to the publication. The bulk of this book consists of the texts of Doyle’s contributions to Light, which also published reports of Doyle’s Spiritualist campaigning. Reading through his letters, lectures and essays we get an insight into the way in which his beliefs developed over the years.
Other titles reviewed in Magonia have discussed the involvement of prominent scientists in the Spiritualist movement in the late nineteenth and early twentieth centuries, showing that they saw spiritual beliefs and phenomena as an extension of current scientific knowledge rather that being in opposition to it. This was a period when new, invisible and immaterial phenomena like electromagnetic waves and radioactivity were being discovered and developed, and the idea of the ‘aether’ as a medium for transmitting these phenomena was still an acceptable idea.
His letters to Light suggest that he was trying to decide whether to regard Spiritualism as a religion or a scientific quest. In 1893 he joined the Society for Psychical Research, and the next year was involved in the investigation of a haunted house. At the time he concluded that the haunting was probably a hoax, but 24 years later he presented an account which concluded that the ghostly happenings were genuine, and may have been the result of the body of a child being buried in the garden.
This discrepancy demonstrates clearly the way Doyle’s attitude changed over time. It seems unlikely that he deliberately lied in his later account, and it is more likely that his view of the reality of the experience evolved with his own opinions on Spiritualism and psychic phenomena.
There was then a gap of 29 years from 1887 to 1916 where nothing from Sir Arthur appeared in Light. This was the period of his greatest literary activity, most of the Holmes ‘canon’ was written in this period along with his historical works and other short stories. However his interest is Spiritualism and the occult continued. In 1907 he named Myers’s Human Personality and the Survival of Bodily Death when asked to recommend interesting books from his own library.
His first letter to Light after the “great hiatus” (to use a Sherlockian term) was not specifically on Spiritualism, but a personal account of what we would now call an ‘out-of-body’ experience. Wingett suggest that this was Doyle ‘dipping his toe in the water’ before making any more definitive statements on spiritual matters. At this time he was still denying that Spiritualism was a religion: “I do not think that Spiritualism is or can ever be a religion, in fact it may be inimical to true religion.” This attitude was soon to change.
Almost every family in the country was affected by the carnage of the First World War, and many people turned to Spiritualism in an attempt to contact loved ones who did not return from the conflict. This included Doyle’s family. His nephew and brother-in-law were killed in action, and his children’s nanny began going into trances and performing automatic writing, at one point apparently predicting the sinking of the Lusitania. 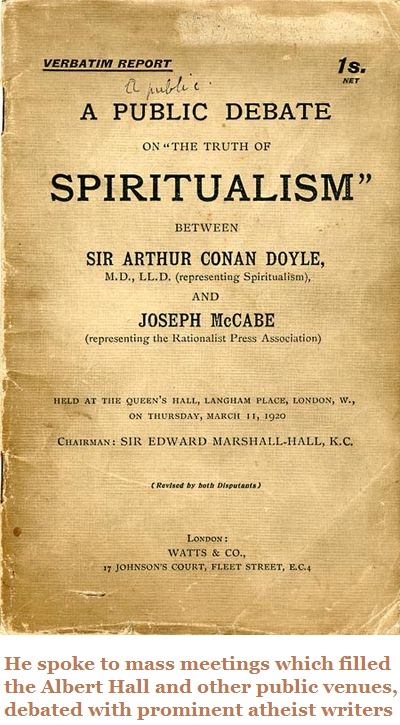 In October 1917 Doyle gave an address at the Royal Society of British Artist in which he declared that Spiritualism was “the New Revelation”. He presented it, rather ingenuously as if it represented his conversion to the belief, coming after many years of reading and consideration, rather than something on which he had had a fixed opinion for many years previously. It had a massive impact on the Spiritualist community, who now felt that they had one of the country’s best known literary figures promoting their cause.
The text of his address was printed in full in Light, and is reproduced in this book. The enthusiastic reception it received elevated Doyle to the role of principle spokesman and advocate for Spiritualism in Britain. His ‘New Revelation’ was the start of a campaign of writing, lecturing and debating which reached thousands of supporters and potential supporters. He spoke to mass meetings which filled the Albert Hall and other public venues, debated with prominent atheist writers, and maintained a succession of letters and articles, published in Light and elsewhere. It was easy for his audiences to believe that at last Spiritualism was to make the breakthrough into society that had been predicted so often before.
I have to say that a century after they were written, some of these articles do occasionally make for rather hard reading. I get a distinct feeling of deja-vu when Doyle calls for the establishment of a “respectable central headquarters” with an “organisation in every country” and the need for a centralised publishing agency. Although that rather reminded me of Fortean meetings in the 1970s, one cannot doubt the power and sincerity of his words.
That breakthrough never came, but in the period covered by this book, abut reading the texts collected here, it is easy to understand how exciting those years must have been to Doyle and those who hung on his words, seeking a new world. In 1920 Sir Arthur set off on a lecture tour of Australia and New Zealand, and was now probably at the height of his career as a promoter of Spiritualism.
This book is not intended as a history of Spiritualism, or a biography of Doyle. It is largely an account, in his own words, of Doyle’s developing views on religion, science and ethics. In the final chapter Matt Wingett hints at some of the controversies that will later be seen to question his judgement. One is his involvement with Harry Houdini [LINK] and, of course, the Cottingley fairies. Even before then the validity of spiritual and psychic photographs was being questioned. Perhaps by now Doyle was too committed to his beliefs to allow any questioning of them.
Wingett concludes with the comments: “All the way through a far more difficult decade, Doyle would stick to his faith with unshakable firmness. Those events however are for another book”.
I do hope we get to read it! – John Rimmer.

Human Personality and its Survival of Bodily Death was written by F. W. H. Myers not E. Gurney.