Winged cryptids are a mainstay of forteana, and appear in may guises across the world. This book concentrates initially on American examples, but offers more than just a basic listing and description of various crypto-species.
🔻
It starts in that way, with a 'Who's Who' giving description of various winged anomalies, accounts of sightings and some description of their character and habits. We also get a brief account of some international sky monsters, including ‘the Bat Beast of Kent’, better know in Britain as the Saltwood Monster, which frightened s group of generates in 1967.
The ‘Who’s Who’ introduces us to some creatures I had never come across previously, such as the batsquatch, described as a nine-foot tall 'flying primate with yellow eyes, wolf-like muzzle … sharp teeth, bird-like feet and leathery bat wings', and with the ability to interfere with car engines. It appeared in the Mt St Helens area after the disastrous volcanic eruption of 1980, and you will not be surprised to learn that it is considered to be a bad omen.
However some of these creatures seem to be limited to one or two reports in a very small area and time period, and perhaps deserve a greater degree of scepticism than more widely reported phenomena. I’m looking at you, eight-foot tall, smelly, three-toed, glowing unicorn-horned Van Meter Monster, and the several “prominent businessmen” from Ohio who allegedly came across it in 1903!
No, the creatures I’m really interested in are the Fortean favourites like Mothman, the Jersey Devil, the Flatwoods creature, and the various forms of ‘Thunderbird’ from Native American legend. Once we get into the heart of the book, we learn a great deal about these cryptids and their history.
Sky monsters in the form of huge birds and dragon-like creatures are an integral part of native American myth, religion and folklore. They form the basis of many of the ‘totems’ that identify individuals, families and nations, and reports of their actual existence continue to the present day. The authors explain the cultural importance of these stories in the lives of the native peoples, and the ways in which they have spread into the culture and memory of later European settlers. 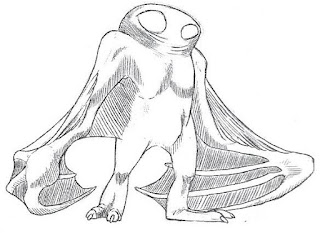 It would perhaps be interesting to see if native American legends of sky creatures could be linked to nineteenth century stories of phantom airships. Both phenomena seem at times to have been regarded as harbingers of future conflicts.
The Point Pleasant ‘Mothman’ is dealt with in depth, and the authors look back at the long and complex history of conflict and cooperation between the indigenous peoples of the Ohio Valley and the white settlers. The famous ‘Chief Cornstalk Curse’ which John Keel and other writers have drawn into the Mothman legend, is placed in its historical context – that it never actually existed – and that the Mothman rose as much from the social and economic problems of post-WWII West Virginia and military activities, as from any ancient curse or legend.
The Jersey Devil has been written about extensively elsewhere (LINK) and is a legend that arose within the European settlers on the east coast, with little input from indigenous peoples. It was born in the conflicts between classes and religions, rather that between races, and includes elements of witchcraft allegations, property squabbles and religious intolerance, as well as the creation of a white ‘underclass’ living in a ‘cursed’ area, and later on becomes an extraordinary tale of local ‘boosterism’.
The book is nicely illustrated by Mel Cabre, mother of the principle author T. S. Mart, with very distinctive visualisations of many of the creatures describes. These are sometimes quite different to the conventional visualisations in other UFO and Fortean publications, and none the worse for that. I don’t really think there is a ‘standard Mothman’ for instance. [above]
There is a great deal of fascinating material in this book, but my main criticism is in the way it is arranged. The stories of the creatures are split up across several chapters with the titles ‘History and Legends’, ‘Sky Monster Culture, and ‘Fact or Fiction’. I found it difficult to understand why particular elements of different stories should be separated like that. I would have welcomed a clearer, more direct narrative.
Nevertheless this is a worthwhile book and gives a much wider cultural and historical view of a subject that is often just treated for amusement as vaguely interesting ‘weird stuff’ – Richard Samuels.