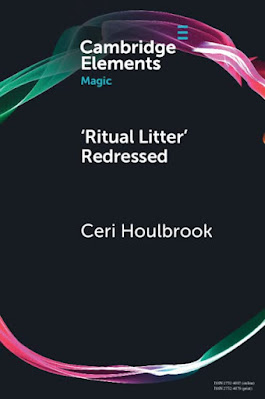 Ceri Houlbrook. 'Ritual Litter' Redressed. Cambridge Elements, Cambridge University Press. 2022.
Perhaps the most significant part of this book's title are the 'scare quotes', as much of this slim volume is devoted to exploring the meanings of the two words contained within them. It is a follow-up and extension of the author's two previous books, which have looked at two examples of potential ritual litter – coin trees and lovelocks, both examples of the practice of placing a semi-permanent deposition on the environment as a marker of ones presence.
Certainly in the case of love-locks the 'ritual' has been pre-planned. Someone has had to buy a padlock, in many cases has had it inscribed in advance in some way, and went to the location with the intent of attaching the lock to a bridge, railing or some other permanent element of the locality. Hammering a coin into a tree-trunk is a rather more casual 'ritual', usually prompted by seeing a tree which has been covered with previously applied coins.
But now some locations which have attracted love-locks have also attracted traders who will sell and sometimes engrave locks for casual passers-by who may have had no previous intention of leaving such a memento. And I suppose it is possible that some people will consciously go to visit a coin-tree expressly for the purpose of hammering a coin into it. The idea of 'ritual' is fluid and debatable.
Equally the idea of 'litter' is open to interpretation. Although locks and coins are not usually classed as litter, they can become such when they reach a critical mass in a specific place. Woodland conservators have become concerned about people driving coins into living trees, and even those in felled branches and logs can cause problems for forestry maintenance. The mass weight of padlocks have damaged bridges and railings. In 2015, 72 tonnes of locks were removed from the Pont des Arts and the Pont de l'Archeveché in Paris, the author noting helpfully that it represented the weight of ten African elephants!
Houlbrook also looks at deposits which seem more in keeping with the concept of 'ritual' where faith groups, often neo-pagan, use historical sites as part of their own rites and ceremonies. Although they are usually intended in a sincere and respectful way, they can often damage archaeological sites, and what is a fragile two-thousand-year-old historical treasure to one person, may be a living part of their religious practice to another. But this in itself raises questions about the 'ownership' of the site, and the relationship between its modern appropriation and the original ritual and ceremonial use of the site - if any. 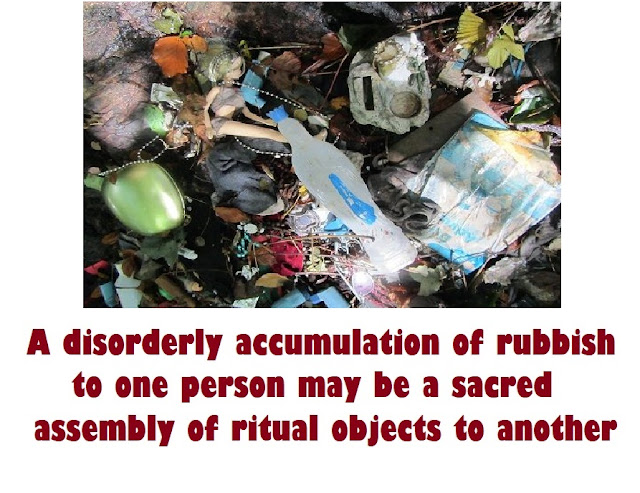 Perhaps more problematical are the objects deposited at rather ephemeral, unofficial sites, often associated with personal public tragedies. These can polarize opinion, particularly if the collection of 'ritual litter' is outside your front door, and they can become 'contested spaces' between their 'secular' and their 'spiritual' commemorative uses. A number of tributes to singers and musicians fall into this category. 'Shrines' to George Michael and Freddie Mercury in London have caused (and still do) conflict with local residents, and have been described as health and safety hazards. Unofficial tributes to Jim Morrison in Pere Lachaise cemetery in Paris have also caused problems but as they often comprised drugs and bottles of whisky, there was less need for the cemetery authorities to to be responsible for removing them!
Not mentioned here, but I recall an instance near where I used to live where flowers, drawings and other mementos were left on railings adjacent to a level-crossing. These were in memory of a teenage boy who had dropped dead of a rare heart condition while waiting for the gates to open, and had nothing to do with the crossing. But they gave the impression that the boy may have been killed by the crossing gates operating incorrectly, which lead to conflict between the boy's family and friends, and Network Rail who operated the crossing. This was eventually resolved by removing the 'unofficial' tributes, and installing a memorial plaque that gave the full medical reason for the tragedy.
Houlbrook describes how in many cases local authorities have taken a responsibility for cataloguing and preserving 'ritual litter' as a record of social history, particularly where they were left as a response to tragedies such as terrorist attacks, natural disasters or major accidents. She cites examples such as the terrorist attack on the Manchester Arena in 2017. Tributes that were left at the site of the attack and elsewhere in the city, were collected and recorded. It became clear that there were no criteria for deciding which items should be discarded, so none of them were. Some were be repurposed, including 2000 soft toys which were cleaned and given to charities; candles were melted remade into new candles which were used in church services; and potted plants replanted around the city. This still left a huge collection of material now housed in Manchester Art Gallery.
Preservation creates its own issues of assessing the value and purpose of such items and how they should be treated, even the most basic one, should such material be removed in the first place. What is the balance between recording and preserving them or leaving them in-situ, and the distress which may be caused by having permanent public evidence of an atrocity such as the Manchester bombing? As Houlbrook says, a “disorderly accumulation of rubbish” can be a “sacred assembly of ritual deposits” to different people; they can be inspiring or disturbing. Does the very act of preserving them add to a victim's trauma or help assure them that their trauma is never forgotten.
As these sorts of deposits seem to be on the increase, these are questions which will increasingly need to be confronted, as well as issue of the cost of preservation and maintenance and even the availability of space to house them and access to them. This slim volume is an important introduction to what is becoming an important debate,
No comments:

Firstly the title Enys Men, the 'men' is pronounced “mane” and the two words mean a stone island in Cornwall. And on this island a Menhir is a standing stone dating from the Bronze Age. It might be part of some core explanation for the happenings in Mark Jenkin’s 91 minute film poem: or simply a teasing folklorist clue of sorts.
🔻🔻🔻
Read more »
No comments:

OF THINGS SEEN IN THE SKY

MEETING THE DEVIL IN THE LANE

You might think that bumping into the Devil on the way home from pub or from work might be a rather terrifying experience – bottomless pit, eternal fires, that sort of thing. However in this book Jeremy Harte shows us that if you keep your wits about you, you can avoid such a fate, and might even turn a bit of a profit.
🔻🔻🔻
Read more »
No comments:

EARTH MOTHERS AND A GREEN MAN

Ronald Hutton. Queens of the Wild. Pagan Goddesses in Christian Europe. An Investigation. Yale University Press, 2022.
In his introduction to this book, Ronald Hutton explains that for most of the last century and a half the concept of 'pagan survivals' dominated thinking about folklore and folk traditions, particularly in England. The idea grew that in the period from the Christianization of Saxon England until the religious upheavals of the Reformation, and in some cases even beyond that, Christian belief and practice had been a veneer over deeper pagan beliefs.
🔻🔻🔻
Read more »
1 comment:

Masks are a simple yet surprisingly effective way of separating a human from other humans. Probably originating in prehistory, when people dressed to mimic the prey animals they hunted in order to think like them and increase the success rate of the hunt. Masks then passed on to shamen who aided both the hunt and the wider community, thus moving onto metaphysical matters. Thereafter masks were associated with alien species and consciousness differing from the everyday.
🔻🔻🔻
Read more »
No comments:

CITY OF THE BEAST

'Psychogeography' is now a familiar concept for exploring the nature of, usually urban, locations, walking through them absorbing their atmosphere, energy and history. This book is perhaps a pioneering example of 'biogeography' reviewing an individual's life through the locations that they have passed through, influenced and been influenced by. The power of this book is that the individual is Aleister Crowley, and the location is London.
🔻🔻🔻
Read more »
No comments:

I first picked up an M.R.James story when I was thirteen. But I didn’t finish reading it. Casting the Runes proved too disturbing. So I pulled the duvet over my head and tried to sleep. Aged sixteen I bought a complete M. R. James collection, still found them scary but they no longer kept me awake. I thought my boyish anxiety of the supernatural had gone.
🔻
Read more »
No comments:

A BOOK OF TWO HALVES

The intentions of the author of this book are, I presume, to set out the linkages between religious dissent in England and the progress of trade through innovation and progressive political ideas. This thematic is however not at all clearly set out in her Introduction that runs to a mere two pages. Similarly her conclusion fails to comprehensively round up her work with any real thematic summation.
🔻
Read more »
No comments:

SETI research has spent decades using radio telescopes to search for signals from intelligent extraterrestrial civilisations. A few unusual blips have been detected but they have never been repeated or have been attributed to terrestrial interference or previously unknown celestial events.
🔻
Read more »
2 comments: